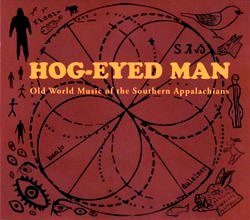 'Hog-eyed man has always been more of a concept than a band' we read in the notes, 'and the CDs we've released are more than just a collection of tunes.'  Sure enough, it's clear that their recordings have a purpose beyond that of simply putting out some tunes for dancing to.  There is a conscious sense of playing music that means something, of playing it in ways that honour the tradition and those from whom the tunes are handed down.  At the same time, these are musicians who bring qualities of their own, reflecting their own engagement with what they're playing and infusing the tunes with character that brings out their life and soul.

Jason Cade plays fiddle and Rob McMaken plays dulcimer, mandolin and guitar.  The fiddle is at the heart of their music at all times, which is not to downplay McMaken's role, essential to the sound, whether playing in unison, in octaves or in harmony.  Unlike the first two Hog-eyed Man albums (previously reviewed in MT), this one has additional musicians, in different combinations, on several tracks: Tom Baker (banjo), Nancy Hartness (guitar), Charlie Hartness (uke), and Art Rosenbaum (vocals, guitar).  Adding other musicians inevitably changes the band's sound, but the character of the music retains the strongly distinctive atmosphere that so infused the earlier duet albums.  That original 'concept' is evidently both robust and resilient, which is a tribute to the two principals, but also speaks of the empathy brought by the newcomers.

A convenient way of getting a handle on Jason Cade's musical approach might be in the opening bars of Wounded Hoosier, where he plays the first time through entirely solo, drawing out the noble beauty and wistfulness in the tune, without ever overdoing it - understated emotion that never even hints at descending into bathos.  McMaken's dulcimer, when it comes in, grounds the tune still more in its Appalachian locale.  The way the two complement each other is strongly apparent in Kentucky Winder: 'We could play this gem from John Salyer all day', say the booklet notes of the tune, and I can believe it, listening to how they bring out the sheer pleasure of playing, subtly tempered with poignant edges.  They work around the tune trying different harmonies - both on the dulcimer and through double-stopping on the fiddle.  Woodswoman strikes me in the same way, as they move fluidly through its changes, in almost hypnotic fashion.

On Rebel Raid, the engineer provides some additional percussion on the back of a guitar, which the notes suggest is intended to add a martial effect, but which to my ears evokes the steps of a dancer rather than the beat of a drum.  'True jigs are extinct in southern old-time music these days, but all the old-timers played a few,' we're told in the note to Marcus Martin's Jig, and indeed you sit up and take notice at the surprise of the 6/8 time signature.  No doubt there's an explanation for why jigs died out in the repertoire, but by including one here - taken at a stately pace - these two remarkable musicians help to foster the vivid sense of reaching out and securely grasping a music that might otherwise be lost to us.

Indeed, the notes are filled with references to source musicians.  Names such as Manco Sneed, Darley Fulks, Bill Hensley, Hiram Stamper, all born in the 19th century in Kentucky, North Carolina or West Virginia, populate the booklet.  Of Durang's Hornpipe we hear of the tune's line of descent, starting with a published source, then to Will Segal, probably born around the time of the Civil War, who taught Jake Phelps, who taught Bruce Green, who taught it to Jason Cade.  We also learn of the Native American strands in the music; an important aspect that perhaps doesn't get the attention that it ought to.

One exception to all this is Redican's Trip To Appalachia, based on an Irish reel, probably composed in New York by Larry Redican in the 1960s under the title The Ironing Board (aka The Galway Reel, a now familiar Irish session tune).  The reading it's given here - faithful as it is to the original's melodic structure - breathes a different kind of life into it, with a lovely, relaxed old-timey feel.  I'd never have imagined the tune's origins if I hadn't read of them in the notes, and yet as other tunes here doubtless have some Irish ancestry, however distant, it is somehow not the slightest bit out of place.

In the record company's publicity, we read that: 'Recorded entirely live around two ribbon microphones, this album transports the listener to an intimate kitchen session, where the musicians comfortably settle in on twenty lesser-known gems mined from deep Appalachia.'  Indeed it is that, but in Cade's and McMaken's hands, it's a lot more besides.