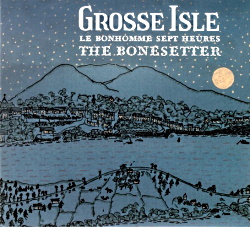 This arrived on my doormat, rather out of the blue - and is really very enjoyable.  In 1847, at the height of the Famine in Ireland, 441 ships sailed for Québec, and those who survived the journey were subject to quarantine on Grosse Isle, in the St Lawrence river.  Grosse Isle are a trio from Québec, featuring Québécois and Irish music and songs.  The members are Sophie Lavoie (fiddle, vocals, piano), Fiachra O'Regan, from Connemara, (uilliannh pipes, whistle, banjo) and André Marchand (guitar, feet, vocals).  They are joined by Michel Faubert (voice) and Jacques Landry (bones) here and there, and it sounds as if there's a fair bit of overdubbing going on - particularly when Fiachra's playing pipes and whistle at the same time!

It so happens that I was listening to some old Old Swan Band tracks recently, and was struck by how wonderfully 'behind the beat' we played.  With the exception of an admirably restrained Éamonn an Chnoic, its interesting to hear the exact opposite here - smack on the beat, and often well ahead of it from Québec.

Most of the 13 tracks are comprised of two tunes, so we get 22 items here, and roughly half are traditional, the remainder being by Sophie Lavoie, plus one or two other modern composers.  It's a pleasure to relate that none of these modern items sound out of place amonst the older ones.  All the songs are in French, and the tunes roughly half Irish and half Québécois.

To give you an idea of what Grosse Isle sound like, here's a bit of track 1, Le bonhomme et la bonne femme. That's the Québécois end of things - for the Irish, The Hawthorn Hedge / Jackson's Jig is a good example.  See what I mean about playing ahead of the beat?  I'd quite like to give you examples of almost every track, as it's a very varied collection, but you'll have to buy the CDs for that - well worth it!