The latest of Michele Gala's Ethnica series deals with the music of the Gargano area; a promontory into the Adriatic sea from the province of Foggia in northeastern Apulia.  More picturesquely, its the 'spur' to Italy's 'boot'. 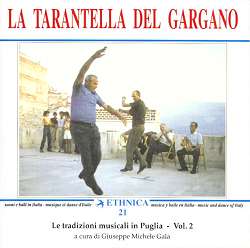 The area used to be supported by farming, stock-raising and fishing - but since the vast majority of it was converted into a National Park, tourism has assumed the major role in the economy.

The CD's cover shows this as volume 2 of le tradizione musicali in Puglia - but inside the booklet it's shown as volume 1 and, since I can't find another volume 1 in Taranta's catalogue or a mention of one in the booklet, we must assume a mistake on the cover.

As is usual with the Ethnica series, these are relatively modern recordings - 1980 to '82 in this case - of real traditional perormers (ie. ordinary people) playing or singing the music which is still a part of their normal lives.  The music is dance music for the local form of the tarantella, a couple-dance for mixed or single-sex pairs, and is played almost exclusively (on this disc at least - just one organetto, one mandolin, one banjo, and two fiddle tracks) by duos with tambouine accompaniment using a normal 'Spanish' guitar - which they call 'French' - and a chitarra battente; the 'stuck guitar' which is/was a common traditional instrument over much of Italy.

This instrument is old (16th/18th century) in form: narrow bodied; curved back; no extended fretboard; multi-course, narrow guage slack stringing; and often three sound-holes, usually incorporating a 'rose'.  As is often the case where an archaic form of instrument or tuning system has survived into the present day, it may often sound slightly out-of-tune to our modern, 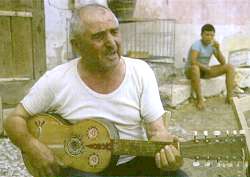 tempered-scale-familiar ears, but this effect disappears as soon as the voice joins the accompaniment.  Readers may well have noticed the same thing with Joseph Spence's guitar playing - carried aurally, I'm told, through several generations from his west-African fatherland.

The accompanying booklet is typically full of detail regarding the tradition, the performers, the instrumentation and the dances, and has a lot of really wonderful photos - most of which are too small to reproduce well here, but the one on the left and on the cover give you the flavour of the rest.  Untypically, only a tiny proportion of the booklet's 32 pages is translated into English, so I'm unable to tell you very much more about the performances without the likelihood of passing on false, mistranslated information.

There is, almost inevitably, a 'sameness' about many of the 25 tracks, since most are tarantellas or similar played by the same instrumentation for similar dances.

An enjoyable and very interesting CD - particularly if you can read a little Italian - and well up to Gala's usual high standards.  Despite being distributed by Robi Droli/Felmay and thus ADA, these records have never really been available in the UK.  Now that ADA has turned into a mail-order only concern and Felmay has moved to Discovery for its UK distribution they are definately unavailable from that source.  Prospective purchasers can get them directly from Felmay by credit card via their site at www.felmay.it, e-mail at orders@felmay.it or phone at 0039 142 50577.  They do speak English!

Musical Traditions Records will shortly be making a selection of CDs of Italian traditional performers available along with its MT and Topic records.