Songs and Tales from Flamborough Head 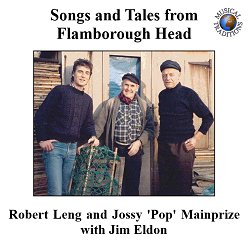 This new release from Musical Traditions brings together recordings made in 1988 and 1989 and originally released on two audio cassettes by Stick Records.  It features songs and stories from two North Yorkshire fishermen, Robert Leng and 'Pop' Mainprize, with singer and fiddle-player Jim Eldon.  Jim was introduced to the pair at a time when he was collecting material for an album of East Yorkshire fireside tales and soon became a regular visitor to their homes.  Initially their tales merely featured snippets of songs, but, encouraged by Jim, the pair remembered more of the songs and started to sing them in public once more.  The songs here are ideal for a singaround in the pub, with plenty of scope for joining in - so although either Robert or Jossy takes the lead on some songs, the hearty unison singing of the three men together is the key feature of the recordings.

Unsurprisingly, sea songs feature heavily: 'Heave Away the Trawl Warp', the lifeboatman's hymn 'Pull for the Shore', 'The Wreck of the Brownlow and Walmo' (which as yet appears to have no Roud number), and a version of 'Grace Darling' that is somewhat different to that normally sung on the folk scene.  There are also humorous songs (I Was in It), sentimental ballads (Oh, Where is my Boy Tonight?), drinking songs (Good Luck to the Barleycorn), and a set of verses associated with the Flamborough Sword Dance.  And there are three renditions of A Thunnerin' Sort of a Lie, a local song in the same vein as The Derby Ram.

The final quarter of an hour or so is given over to the two old fishermen's tales.  As hinted in the notes, listeners from outside the north of England might have to listen carefully to catch all the words, but this spoken-word section really enhances the album.  One slight quibble, nowhere in the booklet notes is it stated when Robert and Jossy were born, or how old they were at the time of the recordings.