I have to admit to a considerable admiration for Giuseppe Michaele Gala, who does the research, field recordings, photos, booklets - pretty well everything ... for the Ethnica series of 19 releases, so far.  As another one-man-band, there's also a feeling of brotherhood ...  I should try not to let it influence my reaction to his records, but I probably don't succeed.  Caveat emptor!

One of his latest releases, available from your usual Felmay supplier, is 'Festivals and Drums' - essentially an overview of the still-existing ritual music of Campania, the area around Napoli and Salerno in the south of Italy. 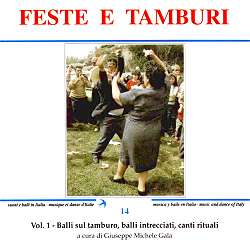 The general sound of the music and song is very similar, at least on a superficial level, to that of neighbouring Calabria, to the south,

as heard on the recent Rounder/Lomax Calabria volume of the Italian Treasury (sound clip - Ballo sul tamburo).  All of that music was recorded in 1954, while these tracks are from the 1981 to '95 period - whether the differences are due more to the geographical or time shifts (or to the ritual nature of the material on this CD), I don't know.

What I do know is that - while still not an easy listen - I found this music far more engaging than the other.  There are hints of Continental influence (sound clip - Ballintrezzo), rather more variety, more excitement, the harshness is not quite so harsh ... I enjoyed listening to all 78 minutes of it.

The 24-page booklet is in Italian, French, Spanish and English, and contains a map of the area showing the recording locations, 18 photos of ordinary people taking part in real events, and real documentation of all the performers, recordings and photos, as well as extensive notes.  At the end of reading it I know something of the songs, music, dances, rituals and people I've been listening to - 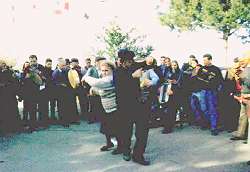 and nothing about Giuseppe Michaele Gala.  Something tells me that this is the way such things should be!

Almost all the 14 tracks are long, as they are in real life - all but one are recorded in the field, as the real ritual is taking place - the longest being 12˝ minutes in duration.  It would be difficult, and largely pointless, to try to select short sound clips which will adequately convey the essence of their track.  The two above and the two which follow will have to do.

The first is a moresca - yes, it's a mumming play/dance complete with culminating swordfight!  The sound clip is of the song and part of the first speech.  This ritual is still practised in Buonopane in Ischia.

My only complaint about this CD is that, while the booklet tells us about the styles of music in general,

there's little about the individual tracks.  I would love to know more about the Canto a figliola on track 13 (sound clip) than the names of the singers, a couple of photos, date and location.  The latter is Somma Vesuviana, from where Maurizio Martinotti recorded the superb Scennenno d'a Muntagna CD for Robi Droli (NT6719) in 1993.

That one reservation aside, this is an excellent record of real traditional music, song, dance, rituals ... still being performed by ordinary people as part of their ordinary lives.  It's good to know it still happens.  And before you say "Yes, well it's OK for these Italians.  A pity we don't have any of this sort of thing left in England" ...  I'm off to Bampton for their Christmas party soon - it still happens there, and at Bacup, Padstow, Marshfield, and countless other places .......  Get up!  Get out!  Go and see!

Two more full-to-bursting (77 minute) CDs from the tireless Giuseppe Michele Gala and his Firenze based Taranta label.  Is that 5 releases in 1999?  How does he do it?

These two CDs feature the music of Irpinia - which the booklet notes tell us is a widespread area of high pastures and mountains in the southern Appenines, to the northeast of Salerno. 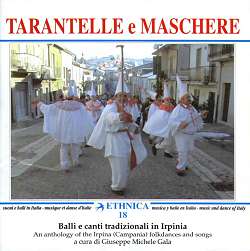 Traditionally, the economy was based on stockbreeding and farming, but the government has attempted to encourage both manufacturing and service industries in recent years.  In spite of these efforts, Irpinia has remained a land of emigration, earthquakes and unemployment.  So the rural economy remains predominant, probably accounting for the richness of the remaining musical traditions.

This is doubtless enhanced by the extent to which the pre-Lenten carnevale is celebrated in this area - celebrations which require the music, songs and dances to be repeated every year, and reinforce them as an integral part of everyone's normal life.  It is the traditions of carnevale which are covered in Volume 1, while the more general secular songs, music and dances are reserved for Volume 2.  The recordings are all recent (the earliest being 1982), and the vast majority having been made duing this year's carnevale period - February 1999.  However, only 8 of the total of 38 tracks are field recordings - resulting in a 'better' sound quality ... but less excitement and immediacy.

Much the same praise and criticisms of the booklet contents apply here as they do for the Campania disc (above), though the lack of detail regarding the particular track or ritual is more iritating and less excusable in this instance, since the booklets have fewer pages and larger print.  From my memory of previous Taranta releases, more of such detail was present in the past and I'm sorry to see this more minimalist approach developing - if, indeed, it turns out to be a continuing trend.  On the plus side, Volume 2 does have the text of all the songs transcribed - but only in Italian.

Again, some tracks are quite long (17˝ minutes in one case!), so sound clip selection is difficult - but to give you a flavour of the carnevale music, here's one of three tarantellas from Montemarano

(where the above cover photo comes from).  Also a quadriglia della mascherata from Serino.  Both are live field recordings.

The material on Volume 2 is pretty diverse, but follows the general trend for the area in being mainly female vocals and accordion accompaniment. 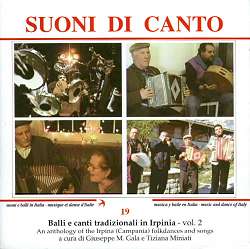 Here's a canto di mietitura from Montemarano.  Many of the same performers are found on both Volumes, and there are also numerous tracks from the same towns or villages.  Montemarano must be a serious place for music,

since a clear majority of the performers seem to come from there, even when they were recorded at another feste in a different location.  Members of the Corso family appear regularly, and here's Angelo singing a serenatella with an accordion, clarinet and tambourine backing - again from Montemarano.

I don't know if Irpinia's inland mountainous location has isolated it from Mediterranean and African influences to any degree - but the music heard here seems, to me, to be far more Continental in flavour than much of the other music I've heard from the south of Italy.  Thus, to a northern European ear it is more approachable, familiar ... less 'foreign' sounding.  All three of these CDs are thoroughly recommended, but I suspect that some readers will find the Irpinia volumes an easier place to start a study of this music from.