Cry you Mountains, Cry you Fields

Unlike the other Albanian CDs I've reviewed, this one doesn't set out to be a survey of the whole country's music.  Instead, it's a CD made up entirely of music from one area of the country, the region of Kolonja, near the border with Greece. 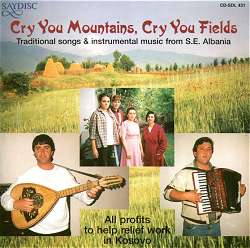 Not only is this a chance to hear an extensive sampling of a local repertoire, rather than the broader canvas of other discs, it's also a chance to hear numerous tracks from the same musicians.  And good musicians some of them are.

The vocal tracks are all in the Tosk polyphonic tradition, with the play of 'receiver' and 'answerer' (yet another different translation of the Albanian words 'marresi' and 'kythesi') above the drone ('iso').  Men's and women's groups are kept strictly separate, with a couple of wedding songs sung by different women's groups.  The repertory includes a comic song, as well as songs of war heroes, but is all in the same polyphonic style.

There's one exception; a delightful little song How Nicely the Cuckoo Sings sung by a group of girls in two-part harmony, with no polyphonic aspect.  It's beautifully simple, and only just over a minute long, but it's one of the most charming pieces I've heard in a while.

However it's not the vocal music which is the real glory of the disc, but the instrumental tracks.  This is particularly interesting and covers a wider range of instruments than usual - though, alas, not the bagpipe (gajde).  Chris Johnston notes that the gajde has almost died out; it's not just difficult to find players, but even to find an instrument.  The Valle e gajdes or bagpipe dance is in fact played on clarinet, with some wonderfully scooped-out melodic lines that would probably be impossible on the pipe.  However, there's a recording of the pipezat (reedpipe) as a substitute for the bagpipe, and interestingly, the ornamentation seems very similar to bagpipe ornamentation, using quick gracenotes on the lowest note to imply a drone or to create articulation.  From the notes, the pipezat appears to be the authentic 'oaten straw' simply made out of a straw or reed for immediate use, rather than a hornpipe-style instrument.  The same player, Nevrus Sulo, also plays the fjell (end-blown flute), and seems to have a rather different style on that instrument, eschewing gracenotes and instead using multiple repetitions of small melodic fragments with many stepwise movements.

The disc opens with a four and a half minute 'heavy' kaba for clarinet that uses the full expressive potential of the instrument.  Notes are 'bent', and broken up into staccato by tonguing and breath.  Aleks Xhelili plays clarinet here, and elsewhere on this disc; he also closes the programme with Kaba kurbeti, an improvisation on an emigration song theme which has an impressive dynamic range and playing which is both delicately evocative and technically superb - a classic in my opinion.  Oh, and he also plays accordion on a track intriguingly entitled The Young Man was Going Shopping, with his regular llaute (lute) player Gjergi Mulellari.

It's a pity there's not more personal detail in the notes.  Given that one of the singers in the women's group is named as Luljeta Johnston, there must be a story there somewhere - and the relationship of 'recorder' and 'recorded' is a datum of some interest to the listener.  However, we are given the names of most of the artists; on those tracks recorded by Chris Johnston, there's good information, rather less on those from reel-to-reel tapes from the Erseka Palace of Culture.  A pity also that we don't have the kind of information on the exact recording circumstances of each track that made the Rounder compilation so interesting.

Profits from the sale of the disc are being donated to charities involved in relief work in Kosovo (that's the spelling used by Saydisc, for what it's worth).  Congratulations to Saydisc not only for their charitable act, but also for producing an interesting and highly enjoyable addition to the Albanian discography.