In the era of sound recording, the music of Cuba has had an impact out of all proportion to the size of the country; its influence on jazz, and on the musics of South America and Africa, and its role as the source of numerous of this century's dance crazes (mambo, rhumba, cha-cha, conga), are well known.  That said, I came to this CD as someone who has never been bitten by the bug; the Cuban tunes I can whistle are The Peanut Vendor and Guantanamera, and when I play the scattering of Cuban CDs in my collection, I re-hear them as pleasant sounds, rather than greeting the tunes, rhythms and arrangements as old friends. 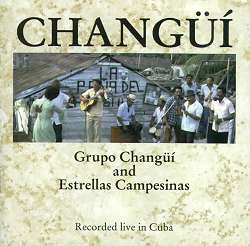 In other words, I approached changüí (the music) and Changüí (the CD) with a severe lack of context, and my account here is heavily reliant on Dita Sullivan's excellent notes.

I don't expect to be adding to the repertoire of Cuban tunes I can whistle, but listening to this CD is certainly a challenging and rewarding experience, and one that I expect to be repeating often.

Since I came to it with little idea of what I would hear, it seems appropriate to play part of the first track, Mi Son Tiene Candela (sound clip); the title means My Son Is Hot, and the song proclaims that 'the son is traditional in our country, linked to the chords of changüí that we must never forget.'  The clip gives a good picture of the sound of changüí, and in particular of its polyrhythms, and their division among the various instruments (which are discussed below) and the vocal line.  Since this is dance music, the basic pulse is pretty clear, but it's equally obvious how much else is going on rhythmically, and listening to changüí is, for these ears at least, an exercise in being constantly surprised by the twists and turns of the music.

Changüí is defined by Cassell's Spanish-English Dictionary as a 'low-class dance' - and that may be recommendation enough.  The distinction being made is a pre-revolutionary one, between salon music, played for the middle and upper classes, and known as puerta cerrada (closed door), and the dance music of the rural and urban working classes, played in aire libre (in the open air).  Changüí is the dance music of Guantanamo, in the extreme southeast of Cuba.  While it uses similar instrumentation to son, the arrangements and tunings are quite different; the tres is common to both, as are maracas and bongo, but in changüí the maracas are high-pitched and the bongo low-pitched, while the reverse is true in son.  The guiro in changüí is made of metal, rather than being a hollowed-out gourd.  Probably the most obvious difference between changüí and son is in the use of the marimbula as simultaneous bass and percussion instrument in place of son's bass and congas.  The marimbula is clearly of African derivation - it's a bass mbira - and it is also found, under other names, in Jamaica, Haiti and the Dominican Republic; Dita Sullivan observes that changüí's instrumentation most closely resembles the perico ripiao of the Dominican Republic.  (Perico ripiao may be heard for comparison on the splendid Corason CD Essential Merengue: Stripping the Parrots (CORA122), although the use of the accordion as lead instrument makes a considerable difference to the sound).

Other distinctive features of changüí are accounted for by sociohistorical factors.  Changüí's African component 'is not the Yoruba-Ibo culture of Nigeria, but the Bantu culture of Congo and the Ivory Coast.  The different language, though no longer widely spoken in Cuba, produces a different rhythm.'  In addition, Guantanamo's cultural history is one of immigration and syncretism; the province was founded by French refugees from the Haitian revolution in 1804, and the construction of the US naval base in the early years of this century led to an influx of workers from the English- and French-speaking islands.

Of the two bands heard on this CD, Grupo Changüí was founded in 1945, and is a professional dance band, while Estrellas Campesinas are designated by the Cuban government as un grupo aficionado (an amateur group), a description which Dita Sullivan rightly calls 'odious,' as indeed is the mindset that feels it's the business of the state to fit musicians into bureaucratic pigeonholes.  Despite its roots being very specific to Guantanamo, changüí has not been without influence on the wider Cuban music scene.  Elio Revé, founder of Orquesta Revé, was a Guantanamero, and the band's music, among the most popular in fifties Cuba, had a changüí inflection.  For a few years Orquesta Revé's bass player was Juan Formell, who left to found Los Van Van, one of whose first hits, in 1973, was Pastorita, which Formell had picked up at a dance where he was sharing the bill with Grupo Changüí.

This CD includes two versions of El Guararey de Pastora, as the song was originally called, and Grupo Changüí (sound clip left) and Estrellas Campesinas (sound clip right) give the song very different deliveries, as may be heard by comparing their respective sound clips.

Changüí lyrics typically invite listeners to dance, while celebrating good times, recounting local history, and boosting the importance of changüí and its traditions:

I don't care if you criticise my traditional changüí
It flows in my blood because I'm Cuban.
How groovy [sic] that the changüí of the past returns
Everybody dance and enjoy my changüí.

That said, I want, as Dita Sullivan does, to single out the complex layers of meaning in Mayumbe which, while functioning as dance music, is also a mambo in the original Bantu meaning: an invocation, in the syncretic religion palo monte,

of the many aspects of Changó, the African god of thunder and lightning, in whose name the singer speaks.  I give a summary of Sullivan's translation and comments in brackets (sound clip):

Yo soy siguaraya (I am a sacred plant)
Yo soy siete rayos (I am seven rays of sun and lightning, also an 1823 anti-Spanish conspiracy)
Yo soy palo monte (I am [a priest of] palo monte)
Yo soy Bonifacio (a local palero)
Yo soy Lucumí (a reference to the Yoruba tribe, and to St Barbara, patron saint of the Lucumí, who represents Changó in santería)
Yo soy Lucifer (another palero)
Yo soy tumba yaya (a sacred tree)
Yo como candela (I eat fire)
Yo soy el diablo (I am the devil)
Yo soy palo caja (another sacred tree)
Yo soy mata ceiba (I am the leaves of the ceiba tree, sacred to Changó)
Yo soy mata siete (I am the leaves of the magic tree 'seven rays', also the nickname of a radio announcer in the late fifties[!])
Yo soy Santa Cecilia (patron saint of musicians, and the name of the recording location)
Sí, ven a parrendearlo! a guaracharlo! aha, ven a cantarlo! (Come dance and sing at the party!)

It only remains to say that the recordings, made on a rooftop by Stuart Deutsch in June 1988, are of absolutely outstanding technical quality.  I've been trying to find a way that won't sound like damning with faint praise, to say that even people who, like me, aren't hugely interested in Cuban music, will find this CD compelling listening and great fun.  On second thoughts, maybe that will do it.