At a first glance, this may seem like the archetypal CD that you would pick up last minute at the airport, along with the Norwegian Sweater and the Troll.  The CD cover gives little away - jolly Norwegian posing with fiddle, and on the back - his delightful young musical family. 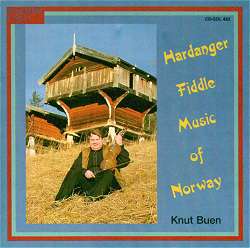 However, this is Saydisc, renowned for its ventures in to the unusual and traditional spheres of music, and the booklet turns out to be a mine of information.

Knut Buen is a musician and family man, who just happens to be one of the finest Hardanger fiddle players in Norway.  His sister is Agnes Buen Garnås, a well-known folk singer who has worked with Jan Gabarek, amongst others.  Buen's mother was a renowned folk singer, and his father and grandfather were exponents of what is now called the 'Buen style' of fiddle playing.  It might be deemed that he has learned by example, but Knut Buen has studied closely the slåttar (the Hardanger fiddle tunes) and folk culture to such an extent, that he was recently honoured by the Norwegian King.

If that isn't enough, the material on this album comes from three leading 19th century musicians - Torgeir Augundson, Håvard Gibøen and Lars Fykerud - and is taken from the fiddle player's very own Buen Kulturverkstad publishing house.  The performances are meticulously delivered - with a sense of deep knowledge, skill and sensitivity.

The Hardanger Fiddle, or Hardingfele, a member of the violin family, is considered the national instrument of Norway.  Widely debated as being created around the 14th or 15th century, the fiddle looks like a richly ornamented violin.  The decoration is done with pearl and/or abalone, and ebony inlay, and ink drawings called rosemalling.  The peg head is usually a lion's head or dragon head with an ornate crown.  The Hardingfele's rich, distinctive sound is aided by a second set of strings; thus eight are used in all.  The lower set of strings run under the fingerboard and through the middle of the bridge.  These are sympathetics, which respond to harmonic vibrations as the upper strings are played.

As well as the harmonics, the use of the microtones or natural tones is a common feature.  This can leave unsuspecting ears with a sense of "out of tune music going nowhere", as was once said to me.  Gibøen used them quite widely though, and the Gangar, The Kivle Maidens (track 12) comes highly recommend as a fine interpretation of these characteristics.  Without a doubt, closer listening and a better understanding of the origins of the Hardingfele really does allow the music to become more easily interpreted and appreciated.

The music of Norway is rich and rhythmic, and would be mostly danced to.  It's origins lie in the fact that the music was largely developed to fit the dance traditions.  There's the Springar - a dance for two partners, the Gangar or walking dance, the Halling - a men-only dance in which they get to leap about wildly.  Once they have settled down, they might then move on to a couple dance - the Bruremarsj - a wedding march! If all that proves too much, there is the Lydarslått - a much slower tune purely for listening to.

There are no real surprises on this album, merely skill and beauty.  It would more than likely appeal to a select audience of say, Scandophiles or even classicists, and certainly to the ardent fiddler looking to broaden his or her musical horizons.

As a living tradition, the Hardanger Fiddle denotes the very essences of life, and this recording carries that through strongly.  By definition, the harmonic structures reflect nature.  There's continuity, and in turn revival.  By passing down through generations, these tunes (often too complex to score) would be revived and have their own unique style and personality stamped on them by the many traditional musicians.

Knut Buen is one of them - and to put his personal touch to it, he has recorded the album himself, and passed it on to us.