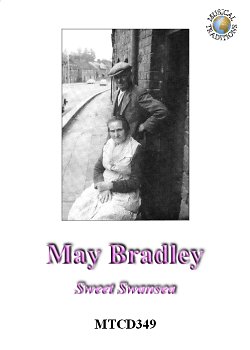 When I first developed an interest in traditional song, in the late 1970s, one of the few folk song books in my local library was Garner's Gay: English Folk Songs collected by Fred Hamer, (E.F.D.S Publications, 1967). This included seven songs collected from the Gipsy singer, May Bradley of Ludlow in Shropshire.  I learned two of Mrs Bradley's songs from this book, and sing them regularly to this day; over the next few years I also heard several of her songs performed by John Kirkpatrick and Sue Harris (and more recently by Tim Van Eyken and Eliza Carthy).  But while I was well aware of May Bradley as a source of fine songs, it was several years before I actually heard her sing.  That pleasure arrived at some point in the late 1980s when I came across a copy of the 1971 LP, Garners Gay (EFDSS LP 1006) which contained five of May Bradley's songs; and then not long afterwards the Vaughan Williams Memorial Library put out a second selection of Fred Hamer recordings, The Leaves of Life (VWML 003, 1998) containing a further four songs from May Bradley.  From these it was evident that, not only did she have some really good song versions in her repertoire, but she was also a phenomenal singer - deserving in my opinion to be placed in the very front rank of English traditional singers.  I was thus delighted to learn, a year or so ago, that May Bradley was to be the subject of the latest Musical Traditions CD project - especially as there were previously unreleased recordings to be heard.

Of the nine tracks issued by the EFDSS on LP and cassette, four have also appeared on CD - three in the Voice of the People series, and one on the EFDSS compilation, A Century of Song (EFDSS CD02, 1998).  The present release however, contains a total of 26 individual songs - so 19 in all which have not been available on record before.  In addition, there are a further ten 'alternate takes' at the end of the CD.  Now the compilers of those earlier EFDSS releases, needing to select just a few items from May Bradley's repertoire, made entirely reasonable choices.  Understandably they focused on the more 'important' and rare recordings - for instance Mrs Bradley's very full version of The Outlandish Knight, the bleak and exceptionally rare On Christmas Day, and Sweet Swansea, probably a local composition, possibly by a member of May Bradley's family.  It has to be said that several of the 'new' recordings here are little more than song fragments.  But I find it very surprising that no one has previously found space on record for Down the Green Groves, her somewhat idiosyncratic, almost homely version of Poison in a Glass of Wine - especially as that's one of the songs transcribed in the book Garners Gay.  And although it consists of just four floating verses, My Blue Eyed Lover is a lovely little song, and May Bradley turns in a beautiful performance.

I find this verse particularly affecting: 'Although my clothes they're going ragged / Still they'll keep my baby warm / Sleep on, sleep on my blue eyed treasure / Your father won't be very long'.  Here it is, as the last verse of track 7 (she actually sings it as the penultimate verse of the duplicate version on track 30). (sound clip)

This release also allows us for the first time to hear May Bradley singing more lighthearted material - just listen to the relish with which she tackles Eileen O'Grady. (sound clip)  This is a side to the singer which we've not heard before, and it's a real treat.  By including all available recordings, however insubstantial, this CD presents us with as full a picture as possible of May Bradley's repertoire.  Moreover the shorter songs are not of purely academic interest - we may regret that she only knew (or could only remember) two verses of Long a-Growing, but there can be no complaint about the way she delivers those two verses.

I'm also very glad that we get to hear more than one recording of several songs.  The CD booklet states 'We have given what we think are the 'best' versions first - then, after a 10 second gap, the 10 duplicate recordings.  Our judgement as to which are these 'best' recordings is, of course, a personal one, and the duplicates should not be considered in any way inferior, or unworthy of your attention.'  Well, amen to that - they're all performances worth listening to.  We often hear about the variations which traditional singers introduce into their performances, and here's a chance to hear it in action.  Most often these variations may be small textual or melodic changes, but we also get verses missed out, and verses repeated and/or sung in a different order.  At the same time, hearing multiple performances of a song can sometimes confirm that an apparent oddity wasn't a mistake, but what she meant to do.  For example, as the song notes point out, You Lads of Learning 'looks like a jumble of lines that May put together after a pint or two - but in fact she recorded it three times, identically!'  (Incidentally, the notes also say 'It's a wonderful tune, with all kinds of tantalising stuff in the text - but what the original song is we can't begin to guess.'  Actually I think there's enough lines in common to suggest that this is a rather broken-down version of the song which Kevin Mitchell sings as The Light Horse, Roud 6551).

There are other cases where May is consistent in what she sings, even though most modern listeners might assume she's making no sense.  Here of course, although her singing voice is perhaps not unmistakably that of a traveller (unlike, say, Phoebe Smith or Mary Ann Haynes), she is conforming to a common traveller approach to song words.  A couple of examples will suffice: in Sweet Swansea she consistently sings (what sounds like) 'My cell being so dark which and dismal'; while the heroine of The Outlandish Knight is made to say 'I don't think it's ruffing a fitting like you', which is clearly a corruption of 'I don't think it's fitting a ruffian like you'.

It was actually comparing the two versions of the song Sweet Swansea which made me realise that, contrary to what Rod Stradling had been led to believe, the tracks on this CD did not represent the full extent of Fred Hamer's recordings of May Bradley.  I first learned this song from the songbook Garners Gay, but partially relearned it after hearing the recording on the LP of the same name.  In particular, I was very taken with the way she repeated the last verse of the song, but on the repeat changed 'I would fly to the arms of my true love' to 'I would fly to the arms of my Polly'.  Listening to the two versions here, I realised that although they both had a different verse order, neither corresponded with the verse order on the earlier LP.  It would appear, in fact, that three of the tracks on Garners Gay are completely different recordings from those which appear here, with the two versions of Cold Blows the Wind differing most markedly, because of the tempo at she which she sings the song (the same verses take just over 2 minutes on the LP, just under 3 minutes on the CD).  The absence of these three tracks is being investigated and, with luck, rectified.  (The three missing recordings have now been acquired and have been added to all new versions of the CD - Ed.)

Squeezing those onto the end of the CD will fill the disc absolutely to capacity, and it will thus make me seem very greedy if I ask for more.  I'll run that risk, however, and just say that had space permitted I would have liked to have heard a few more samples of May Bradley's speech.  We get a few brief snippets at the end of songs, and a somewhat rambling account of the history of Dick Turpin and Black Bess.  I wouldn't have minded hearing some more.  In particular, there's a wonderful exchange on the cassette The Leaves of Life where Fred Hamer is clearly getting very excited at discovering that Mrs Bradley is the daughter of Esther Smith, who had sung in the early 1900s for E M Leather and Vaughan Williams - “Vaughan Williams”, Hamer says, “just died, the greatest composer in this country”.  To which the reply is “Oh well, never mind, sir” - it's clear that the concept of England's greatest composer does not impress her, or maybe is simply beyond her ken.  It's a salutary reminder of the social gulf which existed between so many collectors and their informants - even where, as in the case of Fred Hamer and May Bradley, the two people clearly enjoyed a strong rapport.

One of the great value-added factors with any Musical Traditions release is of course the comprehensive booklet.  I do not intend to dwell on this - you'll gain more benefit from reading the notes themselves.  If I have one criticism of the booklet (and I feel almost obliged to make some kind of critical remark) it's only that there are no details of where and when each of these recordings was made.  Given Keith Chandler's fascination with discographical details this is surprising - but maybe this information was simply not accurately recorded in Fred Hamer's notes?  (That is the case - Ed.) What I can say with certainty is that Keith's biographical sketch greatly extends our knowledge of May Bradley's life and background.  He has drawn on census records, and Andrew King's recent research on Ella Leather's collecting around Weobley, to paint a picture of the Smiths, Wattons and other Gipsy families in the early years of the twentieth century, and back into the nineteenth.  He has had access to information from Peter Faulkner, who helped organise Fred Hamer's mid-sixties recording sessions in Ludlow, and to Heather Horner's 1990 interview with the singer Fred Jordan, who knew May Bradley and went to school with some of her children (and whose repertoire shared several songs in common with May).  And he was able to tap into the family memories of Dot Bradley, May's granddaughter-in-law.  Combined with the music on the CD, these notes help to provide a more rounded - though inevitably still far from complete - picture of May Bradley as a singer and a person.

You'll have gathered by now that I like this CD.  If you enjoy good traditional singing, or even if you just want to learn some fine songs, I think you'll like it too.