The Bahamas - Islands of Song

As we rush headlong towards the Millennium, and the so-called ' global village' (how I hate that term) continues on its path towards homogenisation, it appears, from the dearth of issued recordings made during the present decade, that the old traditional styles are everywhere becoming obsolete.  On every release of late, it seems, the music has been either hybridised to death (whether violently with techno-pop, or more gently with less jarring but nevertheless alien influences), or revised by younger performers with mindsets and lifestyles completely at odds with the former tradition bearers of their chosen medium. 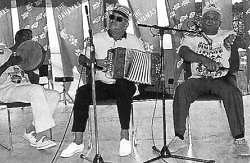 If, like me, you are seeking modern examples of older performance stiles then look no further than this most excellent release of Bahamian artists recorded as recently as 1995.

Instrumental dance music is represented by two trios: Thomas Cartwright and the Boys, and Ed Moxey's Rake 'n Scrape, each consisting of button accordion, musical saw and drum.  Clearly the style is related to the junkanoo bands found formerly (still?) just across the water on the Florida Keys (Folkways FL 4492 featured recordings of one such from Key West), but most obviously is a close relative of the older style quadrille and merengue bands heard throughout the islands and parts of the mainland (Mr. Peters Boom and Shine from Belize, for example). 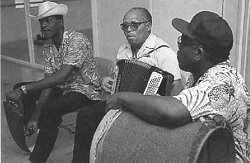 Saw player Huelon Newbold is common to both groups here, and what an unexpectedly exciting sound he manages to create.

Rasping away, underpinning the accordion's melody line, he plays a 4/4 rhythm beneath Ed Moxey's 2/4 lead on Big Belly Man Polka (sound clip), and - even more off the wall - 12/8 across Thomas Cartwright's 3/4 waltz line on that C & W warhorse Nobody's Darling But Mine.  Photos reveal that Cartwright plays a box with 100 plus bass buttons, most of which, in true traditional fashion, he ignores.  In fact, had I not seen the photograph, on the aural evidence of Watermelon is Spoilin' on the Vine I should have sworn that his instrument had only two spoon basses.  Moxey, on the other hand, has a more conventional 2-row melody/eight bass button box, which not only gives a very different tone, but which he plays in a very different manner, including the drawing out and sustaining of the brass chords.  Most melody lines are typically chord dominated, with that on Jimmy Bend a Tree While It's Young being most rudimentary, relying on saw and drum to impart the tremendous excitement.  Of the drummers, Orlando Turnquest (with Cartwright) has a bigger instrument than Cyril Dean's jangle-less tambourine, and attacks it with more vigour.

Of the vocal selections, the Dicey Doh Singers out of Nassau maintain the vocal quartet tradition formerly carried by the Missionary Quartet in that town.  Marshall Stearns recorded the latter in situ about l954, and a ten inch album - Gospel Songs - appeared as Folkways FW 6824.  The group heard here, in fact, cover the earlier Let the Church Roll On.  All four of their tracks are very fine engaging performances, and on the secular numbers they really let themselves go,

owing more when in that mode to the Mills Brothers than the Missionary Quartet.  The jaunty, and all too brief, You Ain't Hurryin' Me (sound clip) reflects almost exactly my philosophy towards life:

This is certainly the track I've returned to most often. A veritable minor classic.

(although there are five of them), and nod stylistically towards the vocal combos (Bruce Green, etc.) recorded there by Sam Charters four decades ago.  Their Christian Automobile (sound clip) is filled with great lyrics and imagery:

Christian, switch on your starter, start your automobile,
Prayer is my driver's license, faith my steering wheel,
I've bought my parking space [in Heaven].

On Dry Bones one of the voices sings in a high tenor, invoking the high lonesome sound of the Blue Ridge; while during the chorus of Liar they use harmonies which hover at the very fringe of Western musical convention.

Their rapid-fire ring play song Went to the Bight, self accompanied by cross rhythmic hand clapping and solo drum, is particularly exciting and hypnotic (sound clip).  The archetypal Bahamian anthem, Bid You Goodnight, is reprised here by the combined forces of the Mites and the Dicey Dohs.  Pacing and harmonic structure are, however, more conventionally four square than the tension-filled versions recorded by the islands' favourite son, Joseph Spence, both solo and by his extended family (those high harmonies by Geneva Pindar never fail to give me goosebumps), and the version here suffers by comparison.

Nat Saunders is in fine voice for one aged '86-plus', and his old-style banjo technique -

single string runs alternating with rapidly strummed chords (heard at its virtuosic best during Round and Round the Bar Room) - combines to create a pleasing whole (sound clip).  His songs are home made, as he carries on the widespread Caribbean tradition of chronicling local life in verse.  From the photo, reproduced on page 21 of the detailed and slickly produced booklet, he appears to be forty years younger, 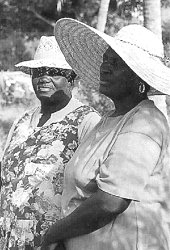 and his mental outlook is evidently similarly youthful, since all of his output (as presented here, at any rate) concerns the pursuit of young women.

In complete stylistic contrast, Avis Armbrister and Almeda Campbell - described as 'two farming divas' (page 21) and certainly imposing figures in the photograph - perform versions of two well-known pieces derived from the British tradition.  'Branch on the tree, bird on the branch, etc.', here titled All in the Woods, is sung in strict vocal unison. On Roll of Pin (Paper of Pins elsewhere in much of the English-speaking World) they adopt a stately pace as one of them (which one is not stated) assumes the male role and sings in an exaggerate manner, before they resume vocal unison for the final verse, in which the avaricious female is, as usual, uncovered.

The spirit or Spence lives on in Israel Forbes, indicating that our hero's stunningly outre guitar style was, in fact, more widespread.  Forbes uses an electric instrument, which imparts a slightly harder tonal edge, as well as sustaining notes longer, 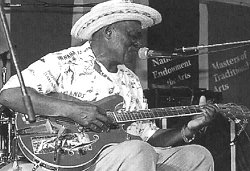 but his technique is not as staccato and unpredictable as that of Spence.  Notes reveal that he is a contemporary of the great man, but not in what fashion or to what extent (if at all) he was influenced.  Certainly the statement on page 20, that he performs in 'his unique South Andros style' is ambiguous, if not downright wrong.

Comparisons aside, Forbes more than holds his own on a trio of sacred and secular numbers, with God Sent Jonah my personal favourite (sound clip).

This is worth buying for You Ain't Hurryin' Me and Heulon Newbold's musical saw alone, but, really, it features so much superb music that your life will be much the poorer for not owning it.  Add to that living proof that the older traditions carry on tenaciously against all odds, and you might begin to see why this is my album of the year so far.  Indispensable (no pun intended!).