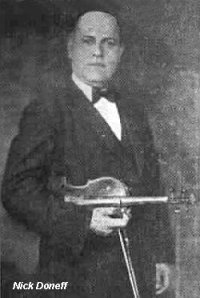 Heavenly; a true banquet; a musical gourmet's delight.  Almost two dozen rarer-than-hen's-teeth vocal and instrumental tracks by a coterie of the finest Turkish, Greek and Bulgarian performers ever to be transplanted from old world to new.  Years ago Mike Stewart reissued some of these and other stablemates on his defunct Wayhi Cassettes series, but now comes a cornucopia of remastered items which appeared originally on the ultra rare post-World War II New York 78 rpm labels Kaliphon and Balkan.  Saba Taksim has a series of intrusive clicks near the end, evidently not clean-uppable; while there is a noticeable amount of just-below-the-surface noise on Huzzam Taksim and Su Dere Bastan Basa.  But in general the copies are clean and nicely remastered.

So much is happening, both melodically and harmonically, within each three minute span that a fever pitch of excitement - at times practically ecstatic - is almost consistently sustained. 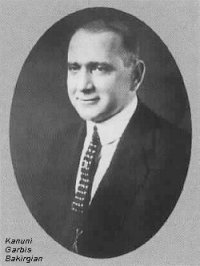 The standard of musicianship is so high that at times it becomes exhausting to listen to more than a few tracks consecutively.  Violin, oud and kanun are at the core of the majority of pieces, played by a trio of true musical legends within their tradition: Nick Doneff, Marko Melkon and Garbis Bakirgian.  On Mavilim the three instruments parallel each other closely for much of the melody line, with the kanun filling in with transitional runs between vocal lines.  Clarinet and second violin are added now and again, giving an almost Epirotic tinge, while intermittently added percussion of drum and tambourine propel the whole along at an even greater pace.

Oud virtuoso Melkon really takes off into some wild improvisation during Sur Ictim Dilim Yandi; while on Rast Taksim, in particular, he uses a wide variety of techniques, including string choking and a good deal of tremolo. 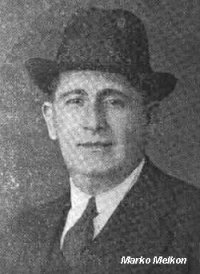 Silences of up to three seconds duration are a commonplace integral feature of the tradition;

on Huzzam Taksim (sound clip), for example, as the crescendo of free improvisation descends to pause before yet another series of breathtaking cascading triplets.  This is truly a masterpiece, and the highlight of a consistently excellent release.

Classical and traditional strands have commingled in Middle Eastern music for several centuries, and it would prove almost impossible to untangle the threads.  But why would you want to?  Just relax and enjoy the roller coaster ride.  On Seker Oglan the violin is fiery and bluesy by turns, frequently passing through and between the rigid half-note system of the Western musical scale.  The effect is both mirrored and exaggerated by Garbis' vocal on Mavilim, as he holds notes which sound flat only to our alien ears. 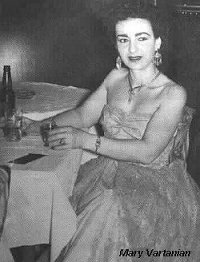 Oh Camel driver
Where are you from?
He said from Alexandria
Girl with apple cheeks
And cherry lips
And belly like a pear
But don't shake your belly
So much that you lose your baby.
(from Devici, track 15)

while 'Sugar Mary' Vartanian entices with her sultry throaty tones on Yandim Tokat Yandim (sound clip).  On this she appears to be accompanying herself with a pair of wooden spoons in each hand, as both depicted on one of the cover photographs and mentioned in the text. (sound clip Elmas Yukzuk Parmakta).

The accompanying booklet is (almost) a model of the way these things ought to be. 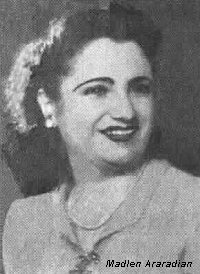 Fine biographical profiles, replete with photographs of the principal performers, sit seamlessly alongside a potted history of the relevant record companies, and the then contemporary night club scene on New York's 8th Avenue (hence the title).  Dates of the original 78 rpm releases are not given, but then no one actually knows the exact details anyway.  The timespan, though, is roughly mid 1940s to early 1950s.  Lyric transcriptions are given in the original Turkish, with an English translation running in parallel on the page, which is useful.  Even though I cannot read Turkish it's still obvious that the latter are rather freely rendered, but that falls well within the accepted tradition of poetic translation.

More worrying are the rather lax disc to text transcriptions.  In particular the word 'aman' seems anathematic to the transcriber.  'Aman' is used extensively in Asia Minor vocal pieces, frequently at the beginning of a song, sometimes within the body of the text, and rarely to finish.  Evoking lamentation - 'woe is me' or 'alas' - the singer uses the word as a vehicle for improvising melody lines, in a manner analogous to the way in which less obviously defined sounds are utilised in other traditions (think of what Nusret Fateh Ali Khan used to do with 'aaaaa').  It offers both a focus for the vocalist to integrate and immerse their spirit into the song, while simultaneously showcasing both skill and versatility.

One observation on the relative financial worth of commercially-issued music cries out to be made.  Forty years ago a Kaliphon shellac 78 would have cost you a dollar.  The equivalent of eleven such discs are offered here.  Eleven dollars is only slightly less than this CD would cost you if bought in the States.

I've heard an awful lot of damned fine music over the past twelve months, but this is at the top of the heap, sharing a harmonious marriage bed with Music of Epirus Volume 1 1925 - 40 (FM 845). I'm in musical heaven: don't wake me.