The dates for next year's weekend will be Friday 8th to Sunday 10th August. The purpose of me informing you of this is to ask if any singer or musician or group who would like to attend as guest should contact me, preferably by email.  We have space for one or two new faces next year.

A new book of 377 dance and traditional tunes has just been published by the Halsway Manor Society.  The music comes from an 1848-1850 manuscript of over 450 tunes kept by Somerset shoemaker and fiddle player William Winter, who lived in the villages of Lydeard St Lawrence and West Bagborough between 1774 and 1861.  The dances include jigs, hornpipes, polkas and waltzes.

Editor, Geoff Woolfe, has researched the life and music of William Winter.  There are dozens of rare tunes in this book which will appeal not only to folk musicians but also to historians of 18th and 19th century popular music.  This book is part of the growing interest in dance music from English village musicians of the past.  William Winter's Quantocks Tune Book and CD is Somerset's contribution to this interest.

Beltona: A label listing and history

By Bill Dean-Myatt, MPhil.  Between 1923 and 1975 the Beltona record label issued nearly 3,000 78-rpm records as well as LPs and EPs.  Starting off as a general purpose label it changed to become the most important disseminator of Scottish popular culture on disc.

This work is the result of many years of research and is the first time that this once well known but now little known brand has been fully documented.  It reveals for the first time the rich variety of Scottish material that was recorded and strips away many of the misconceptions about the label’s history.

EGEA Distribution, the company which has been distributing Smithsonian Folkways in Europe for the past few years, has decided to buck the trend of the 21st century and open a real (as opposed to virtual) record shop in London.  Their slogan 'you can download a tune, but you can't download culture' is so much in accord with my own thinking that I felt it important to give then this little bit of exposure.

The shop opened last week at 267 Archway Road, Highgate, London N6 5BS - and they stock, apart from anything else, the entire Smithsonian Folkways back catalogue!  You can contact them at: 0208 347 5555 or via their website at: www.egeadistribution.co.uk/alternativemusicshop

With local (and national) music shops closing down at an alarming rate these days, it sounds as if they deserve our support.

For further information or to leave name & address for membership, ring 0208 340 0530 or contact petawebken@aol.com

The final line up of guests for the weekend is:

Weekend tickets: £20 per person, including camping.

Just to let people know that the latest (July 2007) edition of my Worlds of Trad Internet radio programme is now uploaded, will be on-line until Wednesday August 15th, and features the very best in traditional folk, ethnic, world, roots, blues, old time country and early jazz; traditional music from absolutely everywhere in fact.

This month there's a celebration of the legendary Bristol Tennessee recording sessions, where Ralph Peer discovered the Carter family and Jimmie Rodgers, 80 years ago this month.  There’s also various old time Irish musicians, some examples of interracial harmony in the recording studio, a clarinet or two, a few flood disaster songs, some blues classics, a tribute to George Melly, who died this month, a Jewish cantor, and even an Austrian barrel organ.

The full playlist is below and can be seen with some more details at http://profile.myspace.com/index.cfm?fuseaction=user.viewprofile&friendID=160651486

To listen to the programme, go to http://www.live365.com/stations/oneworldmusic and click on the yellow speaker button.  If you need to, follow the onscreen instructions to download the station player.  Then wait a moment or two and the station will be on the air.

By an extraordinary coincidence, three of the traditional music world’s most prominent activists will be awarded honorary doctorates over the next few weeks.  Tom Munnelly, founding Chairman of the Irish Traditional Music Archive; Nicholas Carolan, its current Director; and Cathal Goan, its current Chairman, will be honoured by the National University of Ireland at Galway and the University of Ulster at Coleraine.  These awards reflect the much-increased profile and standing of the traditional arts in national life recently and reinforces the centrality of the Irish Traditional Music Archive in the contemporary traditional arts.

On 19 June 2007, the National University of Ireland at Galway will award the honorary degree of Doctor of Literature (DLitt) to Tom Munnelly for services to Irish traditional music.  Tom Munnelly, a native of Dublin, is Collector-Archivist with the Delargy Centre for Irish Folklore and the National Folklore Centre in University College Dublin, for which he has amassed since 1971 the largest and most comprehensive field-collection of Irish traditional song ever made by any one person.  Since 1978 he has been based as a collector in Miltown Malbay, Co Clare.  He was a founder-member of the Folk Music Society of Ireland in 1971 and has been since a founder and organiser of many other traditional music organisations and festivals.  He is a frequent public lecturer and has written extensively on English-language traditional song and field collection.  His audio publications include Irish Traveller singers (The Bonny Green Tree etc) and Clare singers (The Mount Callan Garland etc).  He has recently been the recipient of the festschrift Dear Far-Voiced Veteran: Essays in Honour of Tom Munnelly.

On 29 June, the National University of Ireland at Galway will award the honorary degree of Doctor of Literature to Nicholas Carolan for services to Irish traditional music.  Nicholas Carolan, from Drogheda, has been Director of the Irish Traditional Music since its foundation in 1987, and has established the Archive as the largest public repository of the materials of and information on Irish traditional music in existence.  Secretary of the Folk Music Society of Ireland from 1977 to 1992, he lectured on traditional music in Trinity College Dublin from 1985 to 1998.  A writer, frequent public lecturer, and producer of archival recordings, he is best known for researching and presenting the long-running archival television series Come West along the Road (RTÉ 1) and Siar an Bóthar (TG4).

On 3 July, the University of Ulster at Coleraine will award the honorary degree of Doctor of Letters (DLitt) to Cathal Goan for services to Irish-language broadcasting and the media industry in Ireland.  Cathal Goan, Director-General of RTÉ, is a native of Belfast, and writes and lectures on Irish traditional song.  He joined the station in 1979, and having worked as an archivist, producer and senior producer with RTÉ Radio, he moved to RTÉ Television where he was successively editor of Cúrsaí, the Irish-language current affairs and arts programme, and Editor of Irish-Language Programming.  In 1994 he was appointed Ceannasaí of Teilifís na Gaeilge (TnaG, now TG4), and established the channel, Ireland's third national television service, which began broadcasting in 1996 . He became Managing Director of RTÉ Television in 2000, and Director-General of RTÉ in 2003. 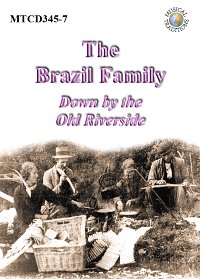 Musical Traditions Records is proud to announce its fourth publication of 2007: The Brazil Family - Down by the Old Riverside (MTCD345-7).  This is our first 3-CD set, packed in a DVD case with an integral 48 page booklet.  The 3 CDs contain 89 tracks, with a total duration of 195 minutes.  The price is £20.00.

In his review, Keith Chandler writes: This really is the most important commercial release showcasing the English tradition to have appeared in many a long day.  I cannot stress it enough : absolutely essential.

Pre-production costs have been generously funded by the Greenwich Traditional Musicians Cooperative.  As usual, credit/debit card purchasing, full booklet notes, tracklists and review are available on the Records page.

The Frank Harte Festival will take place over the weekend of the 21/22/23 September 2007.  The format wiil be very similar to last year with the official opening and a singing session on Friday, two singing workshops, one for younger people and one for older people on Saturday morning, two presentations/illustrated talks on Saturday afternoon followed by some singing sessions, the Frank Harte Memorial Concert on Saturday night and finishing with singing sessions on Sunday afternoon/evening.  The venues will be the same as last year, Maye's Bar on Friday, Club Na Muinteoiri Nasuinta (The Teachers Club) on Saturday (we have reserved the entire building!)and back to Maye's on Sunday.

Essays in Honour of Tom Munnelly Tom Munnelly is widely recognized as one of the world’s foremost collectors of traditional Irish songs in the English language.  In this volume, 28 of his colleagues and friends, all of them outstanding in their own fields, have come together to produce a volume of essays in Tom’s honour.  This volume both does homage to Tom’s personal achievement and shows the vibrabcy and importance of ongoing work in the fields of traditional singing; folksong; folklore; ethnomusicology; song and folklore collecting; and traditional Irish music and dance. 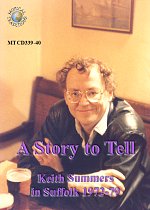 As already mentioned below, A Story to Tell - Keith Summers in Suffolk 1972-79 (MTCD339-0) has just been released at the Keith Summers Memorial Festival at the King & Queen on May 11th - 13th.

This is issued as a complement to the Veteran Keith Summers VT154CD ... 2 CDs, 75 tracks, 160 mins + 52 page integral booklet telling the story of Keith's Suffolk Collecting in his own inimitable words.  Paul Marsh interviewed Keith a few months before his death, and taped his descriptions of his first going to Suffolk and encountering all those wonderful performers for the first time.  The verbatim transcription of these tapes comprises the major part of the 52-page booklet (our biggest yet), and it's just like having Keith sitting next to you in the pub, sharing his excitement, enthusiasm for, and eventually love of, these remarkable characters.  The booklet really is as good as the records!

Error in Meeting's a Pleasure booklets

Due to a failure of both memory and record keeping, Lila Vanover's first name was mistakenly printed as 'Elsie' in the notes.  The producer apologizes to Mrs Vanover for the mistake.

Regarding the source for Fred Whiting's tune (see below), here is a sequence of early recordings by melodeon players, arranged chronologically, which would have been available by the date Whiting was aged twelve (or thirteen actually, allowing for personal memory distortion).  The Empress and Clarion cylinders are least likely; the Jack Williams recording, it seems to me (from the wording on the label), to be odds-on favourite.  To add to the confusion, Peter Wyper, James Brown and 'Pamby' Dick were all Scottish Melodeon Champion at various dates.

However, Phil Heath-Coleman - one of the people without whom the project could not have been properly completed (it has our biggest-ever booklet - 52 pages!) - has noticed an anomaly in the notes.

Although fiddler Fred 'Pip' Whiting told Keith that he learnt his "pet hornpipe" Flowers of Edinburgh when he was about 12 (i.e. in about 1917) from "an old gramophone record by John McClusky, Scotland's champion melodon player", it has not been possible to identify said "John McClusky", let alone any recordings by him.  Can anyone out there throw any light on Fred's story?

This is the fifth year of the event.  The venue at the Fife Animal Park has been improved with new insulated and woodlined roof and renovated kitchen facilities and the Animal Park itself has been restocked with new animals.  Events follow much the same pattern as previous years but with longer sessions on the Friday and Saturday evenings.  There's a great selection of guest singers and some very interesting workshops/talks that should make for a unique and very enjoyable weekend.