Still Growing is a collection of fifty songs from Sharp's manuscripts, specially selected for musicians and singers, edited by Steve Roud, Eddie Upton and Malcolm Taylor.  It also provides biographical information about the sources from whom the songs came, an authoritative introduction defining Sharp's role in the folk music revival, and a select bibliography of work by and about him.  Published by the EFDSS, ISBN: 0 85418 187 3, 128pp, softback, £12.99, available August 2003.

We're sorry to report the sudden death of Donald MacLellan; one of Cape Breton's finest fiddlers.  His Rounder CD The Dusky Meadow, released earlier this year, is reviewed in these pages, and an article about him may also be found here.

I'd just talked to Donald a few days before and he was hale and cheery (we were trying to plan a summer recording session).  He was truly one of the greats and a very nice man.  Another good Cape Breton fiddler, Gordon Cote, also died recently.

Some dates of interest to MT readers: 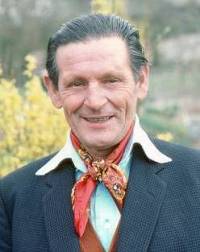 A splendid singer and story-teller, and a well-loved and much respected leader of the Romani community, Jasper Smith died in hospital in the early hours of Wednesday 16th April, aged 82.  He had been unwell for some time.

An early actvist with the Sevenoaks Gypsy Liaison Committee, Jasper became a founder member of the Gypsy Council, when that body was inaugurated on 10 December 1966.  He attended the first World Romani Congress in 1971 and was proud to call himself a Gypsy Councillor right up until his 82nd year.

From the roadside, Jasper campaigned for the opening of the Edenbridge caravan site - one of the first provided by a local authority.  Later he moved with other members of his family to Cox's Lane, Epsom.  While this site was under threat of closure, Jasper built his famous 'rocket to the moon'.  This 25 foot high cardboard contraption was to carry them to a home in the sky, "As the council won't leave us anywhere to live down here."  He subsequently became the site warden there, advised Epsom Council in setting up its second Traveller site and assisted Surrey's Gypsy Projects manager, who commented "Frankly, he is irreplaceable.".

I'm indebted to Chris Roche of Croydon for sending me a photocopy of The Post, dated 7th May, 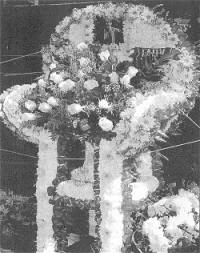 which contained an obit and account of the 100 vehicle funeral procession, including this picture of the Chair of Flowers, a Romani tradition, in which the traveller may 'sit down for a while and rest in Heaven'.

Chris remembers Jasper and his brother Levi first coming to Croydon's Swan and Sugarloaf folk club on 25th May, 1973, and on several subsequent occasions.  Despite the pub's ban on serving Gypsies, Jasper and Levi sang - and the club members bought them drinks.  They would also shake hands with everyone in the room before leaving.  Jasper also sang at the club the night that Ewan MacColl was booked; Ewan said that he knew of clubs which would move their premises 20 miles to have singers such as Jasper among their regulars.

At present I am researching in order to write about the family who built Blackpool Tower, namely Sir Robert Bickerstaffe and his clan.

I came across a reference to Mr Bickerstaffe (as he was then), enthralling the assembled crowd in the Tower Ballroom, with his display of the "Toronto".  I presume this was a dance of the late nineties or early 1900s; perhaps one of your many readers could supply the answer?  I would be grateful if that were the case.

The Universities of Sheffield and Aberdeen today jointly unveil a unique but neglected collection of traditional British song and drama.  The James Madison Carpenter Collection is one of the largest and most important collections of folksong and folk drama ever made in Britain.  Carpenter travelled 40,000 miles around the UK in an Austin Seven between 1929 and 1935.  He searched for singers of sea shanties, traditional ballads and folk songs and performers of mummers plays and recorded their performances, as well as noting down their words.

This rich and varied record was never published and has been in the Archive of Folk Culture at the Library of Congress in Washington DC since 1972.  However, until now the collection has never been properly catalogued and was neglected by scholars and performers alike.

A team of experts from the Universities of Aberdeen and Sheffield have catalogued the collection and produced it as a free, publicly available, online resource.  The website allows searches for particular songs and plays, or users can browse the collection and find out more about Carpenter and his work.  The site will also be of interest to local historians and genealogists, as there will be links to more information about the people that Carpenter recorded and the locations where he carried out his work.

The Carpenter Collection Online Catalogue is published by Hrionline, the online resource of the Humanities Research Institute, University of Sheffield.  The site is located at www.hrionline.ac.uk/carpenter 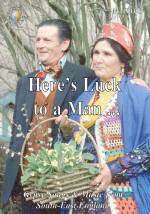 You may have been wondering what was intended to fill the vacant slot in MT Records' listings between MTCD319 and MTCD321.  All is now revealed in the delightful shape of Here's Luck to a Man (MTCD320), which is an anthology of Mike Yates' 1970s recordings of Gypsy songs, stories and music from south-east England.  Like all our new releases, it comes in a DVD case with an integral 36 page booklet, and is priced at only £12.00.

Fuller details can be found in the current Editorial, and you can order your copy from the Records page.

A new Fellside double CD focusing on the songs which travelled from England to Australia and changed in their new environment is to be launched on Sunday, 30th march, at Cecil Sharp House in London.  A concert by some of the performers, including the Copper Family, will be presented by Martyn Wyndham-Read and narrated by Shirley Collins.

Traditions at the Tiger dates:

PayPal - and so the new MT Records website - now accepts both Switch and Solo debit cards, making it so much easier for those of you in Britain to buy MT records over the Net.

Roberto Leydi, scholar and professor of folk culture at DAMS (Dept. of Music and Drama at the University of Bologna, which he helped found, with Umberto Eco), passed away on Saturday February 15. He is (along with Diego Carpitella) considered the founder of Ethnomusicology in Italy. Among his specific interests were social and political song, narrative song, liturgical music, and musical instruments. He was instrumental in the folk revival movement in Italy. I had the pleasure of meeting Leydi in the 1980s (when I contributed sound recordings of Lombard ballads to a series on Italian field recordings he directed, under the Albatros label). I remember enjoying an afternoon in his impressive sound archive, regaled with snatches of rare and wonderful field recordings, and with his infectious enthusiasm for his work. We mourn the loss of this great man and great scholar and hope that more of this precious archive might reach our ears in the future.

Luisa Del Giudice - 26.2.03
Director of the Italian Oral History Institute at the University of California

100 years ago, Cecil Sharp visited Hambridge and noted down John England's singing of The Seeds of Love - the first of thousands of songs in his manuscript books.  To commemorate this historic occasion, EFDSS, in association with Folk South West, are publishing a book of 50 songs culled from Sharp's collection.  The songs will be edited, set and annotated by Eddie Upton and Steve Roud.  Illustrations, including images from Sharp's photographs and papers, will be co-ordinated by Malcolm Taylor.  There will also be an authoritative essay on Sharp by Vic Gammon, together with biographies of the singers compiled by Bob and Jacqueline Patten.  The book, entitled Still Growing: English Traditional Songs and Singers From the Cecil Sharp Collection, will be launched at the Cecil Sharp Centenary Conference in Ilminster, Somerset, 20-22 August 2003. 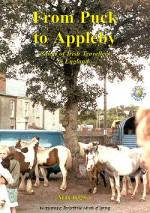 Jim Carroll and Pat Mackenzie have been working with me for the last few months in producing a double CD set (in a DVD case with internal 40-page booklet) comprising 45 tracks of their recordings of songs and a few stories from Irish Travellers in London - 15 of which were originally on the cassette Early in the Month of Spring published by the VWML in 1986.  I'm extremely pleased to announce that the result of our labours, From Puck to Appleby (MTCD325-6) is now available - and it really is superb!

Fuller details can be found in the current Editorial.

Bookends in Oxford, and no doubt other branches also, have remaindered copies of Helen Creighton's seminal Songs and Ballads from Nova Scotia in the Dover edition at only £1.50.  To my knowledge this is the first Dover volume to be remaindered.  Can we hope for Child, volumes 1 through 5 next?  Here's hoping.

Because of family connections - our son is in her band and the Carthys are among our oldest friends - I've not felt it appropriate before to make any comment about Eliza Carthy's recent CD release Anglicana (Topic TSCD539).  However, listeners to tonight's Folk on 2 radio programme will hear that Eliza has been voted 'best vocalist' and that Anglicana is 'best album' and contains the 'best traditional track' of 2002.

None of which might normally be of too much interest to most MT readers ...  However, in this instance I think it should be: Anglicana is a very good CD, containing nothing but English songs and music - all but one of which are traditional.  More to the point - and as listeners to her contributions to recent Waterson:Carthy CDs should have noticed - Eliza is a superb singer who has clearly listened to traditional sources ... and learned considerably more than the words and the tune from them!  Whilst having made a CD which should appeal to a pretty wide audience, she clearly exhibits a love of, and an understanding of, the sorts of things which make English traditional singing so enjoyable and important to me - and, I hope, to you.

Far be it from me to suggest you rush out and buy the CD ... but I do sincerely urge you to give it a listen.  I think you might be pleasantly surprised.

Having known Eliza all her life, the quality of Anglicana doesn't surprise me in the least.  The fact that she felt able to make such an uncompromisingly English, and traditionally influenced, record is, I think, surprising - given the market she must be aiming for.  Most surprising of all is that it should have been so well received by whoever it is that votes for the Radio 2 Folk Awards.  Is this just a one-off phenomenon, or are things beginging to change at last?