Comhaltas TV Programme on the Net

In just a few weeks you’ll be able to tune in to the new weekly Comhaltas programme on the Internet.  The first programme goes out on Thursday, 27 February.  For full information on accessing it, e-mail Willie Fogarty at: iiwc@eircom.net.

Programmes will be approximately 20 minutes in length and each one will remain on the Internet for a full week.  Users can stream the programmes (ie watch them on line) or alternatively download them for future viewing and the creation of their own personal archive.  Despite the very high development and running costs, programmes will be available at a fee of €30.00 (plus €6.30 VAT in EU countries only) for a series of 20 consecutive weeks.  It should be noted that once the service starts it will be available all year round so that users can sign up for the 20 week series of programmes at any time.

Each programme will offer a wide variety of traditional entertainment items drawn from:

The emphasis will be on quality traditional entertainment and the programmes will include special features on regional styles, personalities and new developments in Comhaltas.  The overseas dimension of Comhaltas will also be reflected in the programmes.

I've just heard that Tam Reid, 'the Bothy Ballad King', died on 31 January 2003, aged 73.  He went out to see to his sheep in a blizzard; his wife, Anne, found him dying in the snow a few hours later - the weather stopped the emergency services getting through fast enough to help.

A fine singer in the older style, Tam had been performing since the '50s, and many will have met him recently at the singing weekends, held on his Cullerlie Farm Park, in Echt, Aberdeenshire.  He is survived by his wife Anne, and their three daughters.

The following workshops will take place on Saturday only: For more information please visit the website: http://black-creek.org

There is an Alan Lomax conference in New York City, April 11/12.  For details see: http://depthome.brooklyn.cuny.edu/isam

Part of the conference will be the launch of a new book, edited by Ronald Cohen, titled Alan Lomax, Selected Writings, 1934-1997, shortly to be published by Routledge.

The Friends of American Old Time Music and Dance would like to draw your attention to their 9th annual festival featuring both US and UK musicians and cloggers in a weekend of workshops and concerts.

At last - I've got Credit/Debit Card purchasing facilities available on the Records pages.  These are now accessible from a new domain name - mtrecords.co.uk - so you can get directly to them by entering www.mtrecords.co.uk in your browser.  Alternately, the Records link anywhere in the magazine will take you there, as usual.

Further details can be found in the current Editorial, or on the Records site itself. 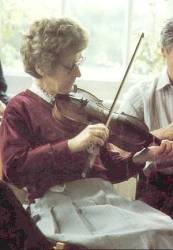 There is no ceremony planned to take place in England.  She is to be buried in Ireland and the Mass is arranged for 12 noon on Saturday, 18th January, at the cathedral in Loughrea, Co Galway.

A very good fiddler and an absolutely delightful woman, she will be greatly missed by all who knew her.  There's an article in the magazine about her by Roly Brown which will bring many happy memories. 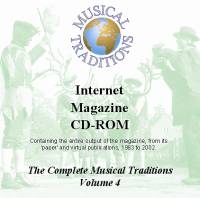 Bang on schedule this year, the CD-ROM containing the entire output of the magazine, from the articles in its first paper publications in 1983 right up to the last day of December 2002 for the Internet version, is now available - priced, as usual, just £10.

For anyone who's not tried it before, the CD-ROM is a really good way of having all the 137Mb of the magazine instantly to hand, with no ISP charges and no waiting for downloads - a very pleasant user experience.  Everything is presented as Web pages, exactly the same as on the Net - so you already have all the software required, and you know how to navigate to what you want.

Just pop a tenner in the post to me, and yours will be on its way to you the same day.  You know it makes sense! 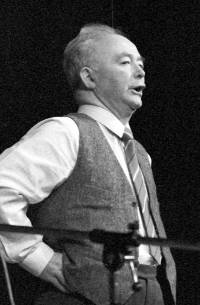 After an illness of only a couple of weeks, Paddy Tunney, Fermanagh/Donegal traditional singer, died on Friday night.  The funeral will take place, we understand, in Letterkenny, Co Donegal, on Monday.

Paddy was born in 1921 and throughout his life was a source of songs and a model for singers across the world.  This may have been particularly true in England where, for many people, he was the first serious and substantial singer to be encountered on those glorious first few LPs, after the novelty of the Clancies and Dubliners had begun to pall.

He was still attending events until quite recently, and will be much missed by all who knew and heard him.

Readers may like to know that Clive Bennett's book Sussex Folk, covering the development of folk song clubs in Sussex - with over 200 illustrations and a foreword by Shirley Collins - was released on 2 December.

Shirley says "This book is a real labour of love ... and what memories it evokes! ... We are fortunate that in our county we had - and thankfully still have - some of the finest traditional singers in England, and the pages devoted to them at the end of the book are a pleasure to read."

Clive has some copies at the reduced rate of £12.50 plus £1.50 post and packing.  Contact him at: clivebennett.folk@virgin.net

Once more the cream of Irish traditional music will be travelling to Glasgow from all over the UK and Ireland to pay tribute the late fiddler/composer Jimmy McHugh. Others not on the bill but coming for a great weekend of music and fun, are Eileen O'Brien, Catherine McEvoy, Brendan McGlinchey, Danny Meehan.

Since writing the above I have discovered two sheets from a printed tune book that had also been found in John Hall's ruined shiel.  These were found by Bob Maddox, who recently left Spittal to live in Berwick-upon-Tweed, and comprise pages 7-10 from an unknown book.  Each page measures 10" x 6" and the pages are damaged in one corner, which means that some of the tunes are incomplete.  The tunes are as follows:

I would appreciate any assistance in identifying this book.

I'm sorry to have to tell you that Bob Hobkirk has died.  Three times Scottish Fiddle Champion, he had been a shepherd in Teviotdale for most of his life, learning from his father.  In 1985 he was invited to play with Yehudi Menuhin at the Queen's Hall, Edinburgh.  In 1992 he was involved in a near-fatal car crash, when returning from playing at a charity event in an old-folk's home, and suffered a stroke which more or less put paid to his playing.

Sam Charters recorded him for Folkways Records in 1959 (I think) and he is on The Borders Folkways album.  Many of his School of Scottish Studies recordings are now available on the CD Border Fiddles, which is now being sold by Living Tradition magazine. (I wrote a review of it).

Since I moved to the Borders I spoke to him on a number of occasions, and found him to be an invaluable source regarding all aspects of local music and song.  He was a lovely man who will be greatly missed.

A conference to celebrate the centenary of Cecil Sharp's first folksong collecting.  20-22 August 2003

On August 22, 1903, Cecil Sharp noted his first folk song, The Seeds of Love, from John England in Hambridge in Somerset.  Over the following couple of weeks, Sharp and his friend Charles Marson, the local vicar, collected several dozen songs in the village and surrounding area.  Sharp and Marson's success led to further collecting in Somerset, publication of the songs, the regeneration of the Folk Song Society and the revival of the songs in new contexts especially in schools.  Indirectly, it led to the revival of English folk dance and the folk music and dance revival which continues today.

To celebrate the centenary of this significant event, Folk South West will be hosting a major international conference to be held near Ilminster, just a few miles from Hambridge, in the heart of Sharp's major collecting region of Somerset.  The Conference Directors are Eddie Upton, Director of Folk South West, and Derek Schofield.

The conference programme will include a variety of papers and presentations on the theme of English folksong.  It will also give the opportunity to visit several of the villages where Sharp collected the songs, including the vicarage in Hambridge, in the garden of which Sharp collected The Seeds of Love.

Papers and presentations are invited on the following themes:

Proposals should be submitted by 1 February 2003 to Folk South West (see contact details below).

The conference will be held in Dillington House, Ilminster, Somerset a residential centre for education and the arts with full conference facilities.  Further information on the venue is available on www.dillington.co.uk   Dillington House is close to the M5 motorway (junction 25) and the nearest mainline railway station is Taunton (conference delegates can be collected from the station).

The conference programme will be as follows:

An Evening with Shirley Collins

A Most Sunshiny Day and America Over the Water

In A Most Sunshiny Day Sussex folk singer Shirley Collins talks about the role played by traditional singers from Sussex in the two English folk song revivals, accompanying her talk with archive recordings.

In America Over the Water she talks about her field recording trip with Alan Lomax through the southern states in 1959 with unique recordings of blues singers, prison work songs, white mountain music, sacred music, and more.

£4.00 entrance to help cover the cost of the hall and Shirley's expenses.  There is no bar, so bring your own.  The Crown and Plough is just across the road and usually allows you to take glasses over to the hall.

Resonance Radio (central London) 104.4 FM and on Internet as mp3 and real audio streams from www.resonancefm.com

Thursdays, 2.00-3.00 pm starting today!  The Traditional Music Hour (British and Irish only for the time being)

Reg Hall's doing it this week (and the first Thurdsday each month), Peta Webb next, then Andrew King, and then Keith Summers.

News has just reached us of a digital edition in CD-ROM format of F J Child's The English and Scottish Popular Ballads from the US publisher, Heritage Muse.

There's too much information to include it all here, but this link will take you to another Page containing all you need to know.