Mike Yates' own Kyloe Records label begins production with two newly recorded CDs of songs, stories and ballads from Scottish Travellers - principally Duncan Williamson and Stanley Robertson.  The records have just been enthusiastically reviewed by Vic Smith, and are available from our Records page at £12.00 each.

The Records page has been growing in size, to the point where - because of all its cover pictures - it was taking a long time to download.  Ever attentive to readers' needs, I have now reorganised the entire Records part of the site into a framed presentation which should be much quicker and easier to use.  Try it out with the link above!

On April 11/12,2003, there will be a conference on Alan Lomax in New York City.  The first day will be at the City University of New York (CUNY) Graduate Center on 34th and 5th Ave and the second day at the Cooper Union in Greenwich Village.  There will also be a memorial for Alan about the same time, arranged by Anna Lomax Chairetakis and Harold Leventhal.  On the night of the 12th there will be a concert with Arlo Guthrie and the New Lost City Ramblers, as a start.

News just available on the RTE website - Derek Bell, of the Chieftains, has died. 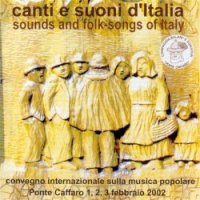 Lovers of Italian music who read my August review of this excellent CD, and subsequently tried to buy it, will have been disappointed to find that the task was well nigh impossible.  As ever, MT has sprung to your aid, and it's now available from our records page.

The Canti e Suoni d'Italia CD contains selected performances from the 2002 Ponte Caffaro convegno internazionale sulla musica popolare, and is published by the same Compagnia Balarì e Sonadùr di Ponte Caffaro who delighted all who saw them at Sidmouth this year.  It has 19 tracks, plays for 71 minutes, and costs just £12.00.

And for those who didn't manage to buy one at Sidmouth, we also have the wonderful Pas en Amúr CD of the Ponte Caffaro carnevale ritual dances from martedi grasso (Mardi Gras) 1993 on sale at the same price.

This exhibition is part of a larger project celebrating both the traditional and contemporary culture of Romany Gypsy Travellers.  Enjoy Real Romany food cooked on an open fire, two beautifuk Gipsy Vardos, Gipsy Traveller Storyteller William Lee with great fiddle and accordion music on Thursday 19th September at 7.30 p.m. at Cranbrook Library.  More details and tickets will be available nearer the time.  A series of associated activities including bender building will be available during the project.  Tel: (01580) 712463.

The second Sunday in September has usually been the date of the Horse fair at Horsmonden in the Weald of Kent.  To the local people, this is 'Hop Picking Sunday' and commemorates the time when much of the bringing in of the local hop and fruit harvests was done by hand rather than machines.  Today, there is less call for any peripatetic work force to conduct such work.  Allegations of trouble by the parish council and other local people from the visiting Travelling population have led to the event being suspended from the village over the last two years.  In fact, in 2000, the fair was held on an industrial estate in Dartford with a token visit in Horsmonden, with an massive police presence in the Weald to quell this longstanding tradition.  (Ironically, the main reason for the Parish Council forcing its suspension was the cost of policing the event, and the police were there anyway to prevent movement into and through the village).

This year, the horse fair was once more held on the village green in Horsmonden.  No vehicles were allowed on the green, and the only market stall was there selling soft drinks.  Previously, there had been sales of very elaborate crockery, bargeware, that sort of thing.  No horse boxes were allowed beyond a field set aside about a quarter of a mile north of the green, so horses and traps were raced towards the village crossroads.  Police were everywhere - vans were stationed on all roads leading into the village.  To complicate matters further, there was a cycle race through the village by a club from Catford which must have caused problems when up against the horses and riders near the very public fair site!  The two village pubs were shut (as was one three miles north in Collier Street).  Despite this, there was no sign of animosity or disturbance of the peace.

It is a great pity that a perceived nuisance by incomers into the Weald has led to the future of this traditional event being placed in jeopardy.  The horse fair was once a venue for Romany music and dance.  This year, it was reminiscent of horses being paraded, patrolled by yellow tabarded community police to ensure it passed off peacably.

Het Brabants Volksorkest, the band who began the revival of traditional Flemish dance music, will be making a rare appearance in England as part of Rotherham Show at Clifton Park in Rotherham on Sunday, 8th September.  Their polkas, waltzes, quadrilles and schottishces from Flanders can be heard on the Main Stage at 2pm and in an acoustic set on the Bandstand at 4pm.

Because of fire regulations numbers are STRICTLY LIMITED TO 100 in the Concert venue, so you are advised to book early.

Tea, coffee and Lunch will be available at the W.C.M.L. on Saturday and Sunday.  Singers attending and the programme could be subject to change

Two Strands of the Folk Tradition come together

Two strands of the folk tradition intertwine at Cecil Sharp House on Tuesday 12th November when the Copper Family and Peggy Seeger will be seen on the same platform for the first time in many years.  Tickets are £10 and available in advance from Cecil Sharp House, 9am-5pm (020-7485 2206).  The concert will start at 7.30pm.  Bar and refreshments will be available throughout. 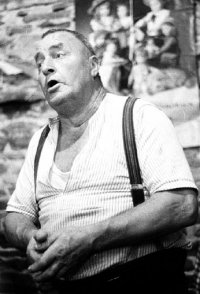 The funeral arrangements are as follows:

Wednesday, Aug 7th, 12.00pm in the village church in MUNSLOW, which is on the B4368, between Craven Arms (on A49) and Bridgnorth.  There will be ample car parking - a field will be made available for parking and an attendant will look after the vehicles.

Following the funeral there will be a reception in the Village Hall in Culmington, nearby, which is on the B4365.  Janice Davis, Fred's niece, would like to make everyone welcome.

The new venue for the Cellar Upstairs club is the Cock Tavern, 23 Phoenix Road, NW1 1HB (on the corner of Chalton Street, near King's Cross and Euston stations).

In lieu of flowers the family has asked that donations be made to The Blues Music Foundation for the Willie Moore Fund, c/o Experience Music Project, 2901 3rd Ave, Seattle, WA 98121.  A New York Memorial Service will be announced.

You may remember that the first of our CD releases - a double of Bob Hart - was published in June 1998.  So it’s now almost exactly four years since MT started issuing CDs.  In that time a startling 31 discs (8 doubles, 6 singles, plus 4 CD-ROMS and a few peripherals) have emerged from my little wind-powered forge here in Stroud. 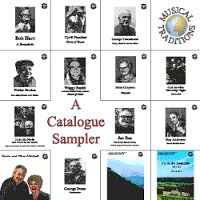 The recent change to the new packaging format prompted me to think that this 4th birthday might be a good time to publish a ‘sampler’ CD ... particularly as one track from each of the 22 records might just about fit on to an 80 minute disc!

The selection has to be seen as nothing more than my current favourite tracks; at least one from each release and more from some - but I’ve made no attempt to be representative of any particular singer’s repertoire or style.  Even then it has been a very difficult selection and a number of lovely things from the several ‘various performers’ CDs have had to be omitted for lack of space.  A full track listing can be found in the Discography pages.

My hope is that this full and inexpensive sampler may find a wider audience than any of the individual publications have, and may open a few eyes to the riches to be found within MT’s ‘small but very valuable catalogue’.

Paul Furey, the accordion player and youngest member of the folk group The Fureys, died on Monday 17th June, aged 54, at Beaumont Hospital in Dublin, after a short illness.  From Ballyfermot in Dublin, the eldest members of the Furey clan, Eddie and Finbar, were among those responsible for bringing the uillean pipes to international attention during the folk music revival of the 1960s.  Joined by Paul and George, The Fureys and Davey Arthur enjoyed an unexpected British Top 20 hit in 1981 with the song, When You Were Sweet Sixteen. Paul is survived by his wife Catherine, their three sons and his brothers - Eddie, Finbar and George. 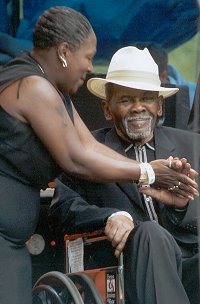 Our roving reporter just sent in this latest development from the USA:

Sunday June 2nd saw the latest little development in the truly remarkable James Carter story, reported recently on this site, when the final day of the 2002 Chicago Blues Festival was opened by a five piece vocal group of family and neighborhood friends.  Led by James' daughter Elizabeth, and backed by a tight little band, they performed a 30 minute set of soul and blues standards that included Night Time is the Right Time, Aretha Franklin's Natural Woman that showed Elizabeth to be no mean singer and Sweet Home Chicago (naturally).

James Carter, now in his 80's and wheelchair bound, was assisted on stage by his wife and, although appearing a little bemused, certainly seemed to enjoy the occassion and the applause he received from the crowd of about 250 people.  While a certain lack of practise and experience was understandably evident, the group's obvious enthusiasm and enjoyment soon won over their audience.  If this warmed the heart, it was their opening number, an a capella version of Po' Lazarus, that chilled the spine and will remain an enduring memory among many within two remarkable weeks in the Windy City.