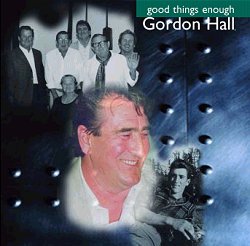 The new Gordon Hall CD is now available from MT via our Records page.

There is a copiously illustrated booklet with essays by Mike Yates, Malcolm Taylor, Shirley Collins and Bob Copper and sleeve notes by Roy Palmer.  Retail price is £12.00 and there will be no reduced prices for Friends as this production is essentially a fund-raising one for Cancer Charities.

It is with great sorrow that I pass along word that William Main Doerflinger, folk song collector and author-compiler of Shantymen and Shantyboys (later reissued as Songs of the Sailor and Lumberman) died on the morning of December 23rd at his home in New Jersey.  Bill died from a stroke following an operation.

He started collecting folk songs as a student at Princeton University.  His first field trip was to Nova Scotia and his first informant was the bus driver who drove him to his first night's accommodation.  His specialty was the songs he found in coastal New England and the Canadian Maritimes, and in New York at Sailors' Snug Harbor and other places.  They were the repertoire of deepwater mariners and offshore fishermen, and lumbermen who felled trees in northern forests.

Bill Doerflinger was the dean of sea music scholars and one of America's great folk song collectors, an irreplaceable person who sought out and found the true songs of maritime workers and, fortunately for us, recorded them for our enjoyment.  We will be forever in his debt.

A memorial service will be held in January.

Lucy Broadwood in her own words

To celebrate the deposit of Lucy Broadwood's diaries in January 2000, archivists at the Surrey History Centre have prepared an exhibition of her songs, diaries and papers which aims to reveal some of the many facets of Lucy's life and personality in her own words and those of her friends.

Lucy Broadwood (1858-1929) is now best known as a pioneer of the folk song revival of the late 19th and early 20th centuries. It was largely through her efforts that the Folk Song Society was able to preserve so many of the traditional songs she loved.

The exhibition concentrates chiefly on the period up to 1914, during which time Lucy was at her most active and English musical life was undergoing great change and innovation. While emphasising the important role she played in the creation of the English Folk Song Society, the exhibition also reveals her part in the rapidly changing musical landscape at the turn of the century; her development as a performer; and her energetic social life in the world of music and concerts, private dinner parties and weekend visits in London, Surrey and throughout the country.

The exhibits are drawn from the large collection of Lucy's personal papers now held at Surrey History Centre, Woking; or have been loaned by the English Folk Dance and Song Society, and Horsham Museum. Items on display include

Following the overwhelming success of the inaugural Jimmy McHugh Memorial which was a sell out we are delighted to announce to 2nd concert which will again present the cream of Irish traditional music and feature many musicians and singers who were musical comrades of the late fiddle master, Jimmy McHugh.

Robert Shelton was a renowned writer.  His definitive work on Bob Dylan (No Direction Home) is now considered by many to be a seminal text on perhaps the most significant US singer/songwriter of the 20th century.  Shelton also wrote copiously on US and UK folk, rock and country music.  Following his death, the Institute of Popular Music at the University of Liverpool received some of Bob's most significant archives.  Now, in a celebration of Shelton's life and work, we are holding what will be the third of an annual Robert Shelton Memorial Event.

Following the success of the workshops and concert at the Neptune theatre in May, 2000, The Robert Shelton Archive intends to hold a one day Robert Shelton Memorial Conference and Concert at the historic Bluecoat Arts Centre, School Lane, Liverpool on May 19th, 2001.

The Archive continues to seek papers reflecting Bob Shelton's interests, and for 2001 we would like them to concentrate on the art of rock/pop/folk criticism.  These papers need not be 'academic', as such, but should be related to the following issues:

Selected papers may be published.  Presentations will be limited to 20 minutes.

Once again, we are pleased to be able to offer MT readers a new Topic release ahead of its official launch date.  The Bonny Labouring Boy is another lavish VotP-style production - two 78+ minute CDs, 54 tracks and a 60-page booklet housed in a super-sized case.  The booklet is really superb: introduction by Reg Hall, song notes by Steve Roud, biography and appeciation by Paul Marsh.  Puts our booklets to shame!

It is now available from the MT address and full details and printable order form appear on the Records page. The Bonny Labouring Boy costs £16 (the same as it will from Topic), but our price includes UK p&p.

The Cullerlie traditional singing weekend is to be held on 6-8 July next year.  And ...

Crossing Boundaries is devoted to traditional fiddlers and fiddle music from countries around the northern seas, combining an international conference with performance events and workshops, as well as opportunities for informal sessions.  The North East of Scotland, famous for its fiddle tradition, is the setting for this event, organised by the Elphinstone Institute in conjunction with other local, national, and international arts and cultural organisations.

The convention will focus on the way the fiddle, fiddle music, and styles of playing cross boundaries of all kinds - geographical, political and personal - creating new styles and fresh musical insights.  The conference will explore the past and future of traditional fiddling in social, ethnological, and musical contexts, with keynote contributions.  Themes include: transmission, performance, social context, symbolic or religious function, stylistics, material culture, dance, supernatural beliefs, folklore, and iconography.

If you are interested in attending, contributing, performing, or offering a twenty-minute academic paper (abstract of 300 words, N.B. deadline 1 February 2001), please e-mail or write to the Elphinstone Institute.  (The Institute may present abstracts of papers for peer review and anticipates the publication of the proceedings.)

Local Supporters: SCaT (Scottish Culture and Traditions), Dyce Academy, and the Lemon Tree in Aberdeen; the City of Aberdeen; Aberdeenshire Arts; the Royal Scottish Academy of Music and Drama in Glasgow; the School of Scottish Studies, University of Edinburgh; the Shetland Arts Trust; and the RNIB.  International Partners: the Irish Centre for World Music, University of Limerick; the Grundtvig Institute, University of Gothenburg, Sweden; the Grieg Academy, University of Bergen, Norway; the Ole Bull Academy, Norway.

Friends of Dan McGonigle will be saddened to hear that he is in hospital in intensive care, following a recent road crash.  Dan, an unsmissable part of the Inishowen Traditional Singers Circle, over many years, is widely known to fans of traditional singing all over Ireland and England.

Cards and other greetings can be sent to Dan via his friend Jim McBride at: Dun Emir, Shore Rd, Buncrana, Co Donegal, Ireland.

I am extremely sorry to have to pass on the following piece of sad news, just sent me by Derek Schofield:

I understand that the traditional Northumbrian fiddler, Willy Taylor, died earlier this week.  Born in 1916, he started on the melodeon, but was taught to play fiddle as a boy, and then turned back to it later on.  In the pre-war period he played for village dances in the rural area around Wooler, Northumberland.

He came to the attention of the wider folk revival in the '70s, and especially in the '80s, when he appeared at festivals and clubs alongside Joe Hutton and Will Atkinson - The Shepherds.  Willy is featured on The Voice of the People CD series, especially volume 19, Ranting and Reeling, and his photo graces the cover.

Always friendly, always encouraging, always enthusiastic - he will be much missed, but his music will always be remembered.

And also from the same source:

I regret to announce that Bob Grant of Headington Quarry Morris Dancers died on Friday 27 October 2000.  Bob was the club's archivist and as such was a mine of information about the Headington dancers in the twentieth century as well as life in the village.  His uncle, Charlie Jones, danced with the side and was a Squire.  Bob himself was a member of the club for over thirty years, and he also played Turkey Snite in the Mummers' Play.  He had not been well for some time, and was noticeably frail at the Boxing Day 1999 celebration.

Bob's help to me with the William Kimber CD was invaluable.  He will be sorely missed.

I've just acquired a copy of the Folkways vinyl album Songs of French Canada (FE 4482, issued 1959).  As with a lot of secondhand copies of that label and vintage the sleevenotes have disappeared.  The outer sleeve lists the song titles, but no names of performers.  Can anyone please send me such a list, or possibly a photocopy of the original booklet?

I can be reached via email at: heather.horner@physiol.ox.ac.uk

Thanks in advance to my saviour.

I have just heard from Ian Anderson that Eric Winter died during the night of the 23rd October.  He was 79.  Apparently Eric died peacefully in his sleep in hospital with his headphones on and music playing.  It was his long-ago expressed wish that his body will go to a hospital and that he didn't want a funeral, and his request is being followed.

Ian had spoken to him a few times just in the last couple of weeks and he'd sounded more bright and cheerful than in quite a while, enthusing about the big Broadside set just issued by Folkways, and reminiscing about the '50s political song movement connected with the Aldermarston marches etc that he was working on a feature about, the campaign to get Pete Seeger to the UK in the early '60s and so on.

I'm pleased to be able to confirm rumours of an impending CD release of some songs from the great Sussex singer, Gordon Hall, who died earlier this year.  Jon Dudley has just sent me the following:

You may have heard that Jim Ward, myself and others are in the process of producing a CD of Gordon Hall which will be sold on behalf of several Cancer charities ...  This is a really exciting project, and the recordings that Jim has obtained are previously unknown and were privately made by Gordon at a professional studio within the past 5 years.  They are full of spirit and gusto, as I believe the engineers set the machinery running and left him to himself!!  Presumably someone came in to change the DAT every so often.  These coupled to three of Jim's own live recordings will, I hope make for a great album ...  Add to that essays by Mike Yates, Malcolm Taylor, Shirley Collins and Bob Copper and sleeve notes by Roy Palmer and we should have something to do the old kiddie proud!

The event will take the form of a memorial concert with (unfortunately) very limited admission, only 150 I believe.  This tributees (if that's a real word) will include Bob Davenport and The Rakes, The Copper Family, and musical contributions from many of Gordon’s friends in the folk world.

We would stress that tickets are only available by contacting 01293 413928 - first come first served - and because the event is essentially a fund-raising one for Cancer Charities, there are no complimentaries!

There will be a copiously illustrated booklet with essays by Mike Yates, Malcolm Taylor, Shirley Collins and Bob Copper and sleeve notes by Roy Palmer.  Retail price will be £12.00 and it will be available from Musical Traditions as soon as it's ready.