After a very long gestation period - when a CD was ready but the booklet notes were almost nonexistent - I'm extremely pleased to tell you that our record of this fine Buchan (northeast Aberdeenshire) singer - Daisy Chapman: Ythanside (MTCD308) - is now available.  The official launch will be at the Cullerlie Singing Weekend on 22nd July, but copies are now available for sale here - see Records Page for further details and ordering.

The wait was well worth it, as a number of additional recordings have come to light and I have been enormously helped by Springthyme Records' Pete Shepheard in getting the booklet together.  As usual, the Notes from this now appear as an Article in these pages

A number of readers, particularly those from outside the UK, have asked if we can accept VISA payments for MT records.  Unfortunately, the costs involved in this would mean that our sales figures would have to increase ten-fold before it became a feasible option!  However, we have now concluded an agreement with Topic Records to sell our records through their Mail Order operation.

Anyone wishing to buy MT records by Credit or Debit card should telephone Topic Mail Order, or fill in and post/FAX one of our printed Order Forms - full details appear on the new Records page.  Topic also keep a stock of our CDs, so dispatch should be immediate.  This arrangement is mainly to enable overseas customers to buy our records more easily - we hope that UK customers will continue to deal with us directly, as our profits from the Topic deal will be severely limited since they have to include VAT and other costs in their price.

So now readers will have access to the majority of the UK production of traditional music CDs from a single source, with just the one letter / e-mail / phone call - and just one payment ... by cheque from us, or plastic from Topic.

A celebration of contemporary seasonal events and traditions of the British Isles and Ireland by Doc Rowe, who has been documenting cultural tradition in both audio and visual means for over thirty years.  The richness, colour and variety of the vernacular folk arts of our islands is often overlooked, ignored or quite simply unknown.  This lively presentation will be using photographic and video examples from the Doc's own archive collection and should be both stimulating and surprising.

The 'Booze' has been generously provided by Smiles Brewery, Bristol.  'Blood' and 'Bedlam' may follow in consequence!

Readers might wish to have a look at another Reg Hall / VotP interview, this time carried on the Offbeat Roots site.  Reg is interviewed by Ed Baxter, who also then reviews the Series, from a somewhat different prespective to that normally found in these pages.  Worth a look, at:
http://www.l-m-c.org.uk/texts/hall.html

Our latest CD release is now on sale.  This double CD, certainly our most lavish production to date with a 32 page A5 booklet, contains pretty well all the songs (49 tracks) Walter recorded for Mike Yates in 1978-80 which are not currently available on CD elsewhere.  See our Records page for more details.

We were saddened by the news of the sudden death of Clare fiddler, Bobby Casey, on Saturday (13th May) evening at 8.30 in Northampton General Hospital.  He was admitted on Thursday and was found to have cancer.

Bobby was widely regarded as one of the most outstanding fiddlers of his generation.  He emigrated to London in 1952 with his musical partner, Willie Clancy who later returned to Ireland.  Casey remained to become one of the catalysts which created the great renaissance of Irish traditional music in London in the '60s and '70s.

In 1992 he and his late wife, Ann moved out London and settled in the small village of Weedon in Northamptonshire.

He is survived by his son, Seán and two daughters, Susan and Angela.

(It is hoped that a proper Obituary will appear here later - Ed.)

The launch party for this totally commendable example of authentic tradition, George Townshend - Come, Hand to Me the Glass (MTCD304) will take place in the Royal Oak on June 8th.  This was one of the pubs that George used to sing in.

Rod Stradling got to hear that Brian Matthews of Punnetts Town had some tapes of this Lewes traditional singer.  The permission to clean them up and release them results in this wonderful example of 25 songs from our local tradition.  George, who died in 1967, had a delightful tenor voice and a wonderfully clear and light, but firm way of delivering his songs.  His voice is sure and very pleasing.  Some of the songs are slightly different versions of songs that exist in the Copper Family's repertoire.  Amongst some real delights - songs that have initially caught these ears - are Pretty Nancy From Yarmouth, Young Collins and 'Twas Early One Morning.  As delightful and interesting as the recordings is the well-researched accompanying booklet.

It's intended, I believe, to make the event free entry with a collection for expenses, so as to allow you all pleny of money left to spend on buying the CDs!

In a similar vein to the above piece, this one is to give notice of our intention of holding the Official Launch of the long-awaited Daisy Chapman CD (MTCD308) at the Traditional Singing Weekend at Cullerlie Farm Park, Echt, Skene, Aberdeenshire on Saturday the 22nd of July, at lunchtime.  Details of the Weekend can be found below.

Since this event is nearly three months away, it is possible that the CD may not actually be available at that time, but we are pretty confident that it will be, and will keep readers informed if the schedule looks as if it won't be adhered to. 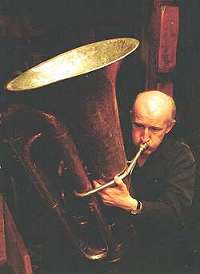 Shock news from the North: new Society CEO Phil Wilson was seen by one of our roving reporters at both the Midgley and Bacup events - actually watching the traditional rituals with apparent interest, rather than the more normal networking with area bigwigs.

As if this scandalous behaviour were not enough to destroy his credibility entirely, he was later seen in a session in a local public house, playing a melodeon and, later (well after lawful closing time, in fact) also playing a euphonium!  This final enormity was captured by society paparazzo Doc 'Scoop' Rowe and passed to us as a public sevice.

Clearly, things will soon be at a pretty pass in Regent's Park Road, and we await further developments (not to say resignations) with considerable interest.

The Traditional Song Forum's April newsletter includes details of the TSF meeting on 20th May which will be a special event called 'Discoverers of Tradition'.  This is an informal one-day event, in which veteran researchers Reg Hall, John Howson, Peter Kennedy, and Doc Rowe will talk about their experiences collecting, documenting, recording and researching traditional song, music and custom in Britain since the 1950s.  The event is arranged jointly by TSF and the English Folk Dance and Song Society and will be held at Cecil Sharp House in London.

The TSF Website is at: www.tradsong.freeserve.co.uk and also has a new search facilty for the site and a message board.

As part of the world Gypsy Music festival at the Barbican in London in May, an informal presentation will take place in the Garden Room, Saturday, 13 May, 2.00-5.00.   It will probably be free, but tickets must be reserved by telephone, and there will probably be a booking fee of 50p.

Reg Hall will be introducing Norma Waterson, Sheila Stewart, Vic Legg, Jim and Lynette Eldon, Tom and Jean Orchard and Wiggy Smith.  (Harry Lee's grandson, Ambrose Cooper, will be invited if he can be contacted).  There will be a bar and food on sale in the room.

Sheila Stewart will be doing an hour on her own later in the evening.

It's early days yet, but the following have been booked so far: Tickets and enquiries:

A festival to celebrate the singing traditions of North-East Scotland, Orkney, England, and Ireland in the unique setting of Tom and Anne Reid's farm in rural Aberdeenshire - Cullerlie Farm Park.

The weekend is a unique celebration, bringing together outstanding traditional singers from the North East of Scotland, Orkney, England, and Ireland.  The event is especially for those who like to hear, enjoy and join in the traditional singing.  Essentially informal, friendly, and non-competitive, it will be just he place to encourage the young and less experienced as well as the old hands.

Róisín White, the well known Ulster singer, is taking a year's leave of absence from her job as a Gaelic language teacher in Armagh City.  She is looking for work as a tutor/workshop leader etc in the general fields of song, Gaelic language, folklore, etc, and will be available from the end of the present school year.

She can be e-mailed at roisinwhite@hotmail.com

Roughly hewn and Volvo large,
Oil-grained hands from breakers yard,
Greased-back hair, and nicotined lung,
A monument of ballads sung.
Raw of voice and unrefined,
The undulations of melodic line.
Quaint songs and words in metered rhyme,
A relic from an earlier time
Conjured images from the air,
Garbaged streets, gin alley, bosoms bare.
Wellington, and brave Bonaparte,
Unrequited love, and broken hearts.
Murder, rape, and battles won
Iron-bound wheels of waggons rung.
The flower, and the Match-girls' cry
In Mayhew's London, young folk die.
The ballad-monger's voice booms out,
To rise above the hawker's shout.
The sounds, and cries of London's past
In metered line, the die is cast.
Times gone, relived, vivid, bold,
Spills from genetic memory-mould.
A ballad singer, reincarnated,
Although by many, underrated.

Do any of your learned correspondents, or anybody else for that matter, know anything about chamame - rural music from Argentina?  I'd be grateful for any insight ...............