action for preservation and accessibility

The British Library National Sound Archive (NSA) has a well-regarded International Music Collection which is responsible for traditional music from all over the world.  We acquire published material from record companies and unpublished recordings through our own recording work and by donation from collectors and researchers.

We feel, however, that we have made insufficient progress in the collection and preservation of traditional music from England, and in the networking of resources on music from Scotland, Wales and Ireland.  Over the past two years we have been exploring ways to redress this situation, in discussion with other insitutions and individuals central in this field, such as the Vaughan Williams Memorial Library, NATCECT at the University of Sheffield, members of the recently formed Traditional Song Forum, Folkworks, Doc Rowe, Peter Kennedy, John Howson, Ian Russell and others.

We are now in the process of preparing a Heritage Lottery Fund application which will make it possible for us to tackle three activities:

The main facilities we can offer are: If you have a largely unpublished traditional music collection recorded in England, we would like to invite you to participate in the project. At this stage we are trying to scale the project in terms of duration and cost. To this end we have designed a questionnaire to be sent out to collectors, with which we hope to obtain information on the size and nature of their material. If you would like a questionnaire, or if you would like to find out more about the project, please ring the International Music Collection at the National Sound Archive on 0171 412 7427, or e-mail us on either of the addressses below. We look forward to being in contact with you and to learning more about your collection.

A much fuller version of this news item, plus a list of what the NSA already holds, is to be found in our Traditional Song Forum pages.

In a recent review, Keith Chandler commented "Full marks here to Heritage, who (not unexpectedly) draw upon compiler Richard Spottswood's mammoth ethnic discography Ethnic Music on Records (a prime candidate for this site's 'Enthusiasms' section if there over was one)."

For personal reasons, Keith does not wish to write the piece himself - but we would be very pleased to receive something along these lines from any other reader or contributor.

Len Graham is one of Ireland's most respected and best known singers of traditional songs, and John campbell is one of her finest seanachies - storytellers.  Together, they should make an unmissable combination.  Tour dates are as follows: 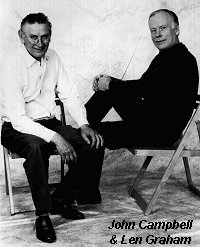 Our sister club in central London regularly features both traditional and traditional/revival guests.  They meet at The King and Queen, 1 Folet Street, W1, just under the Post Office tower, and meet on the 3rd Friday of the month (usually).

Some coming visitors to the club which may be of interest to readers include:-

Readers might like to note that superfiddler Martin Hayes, accompanied as usual by guitarist Dennis Cahill, is on a rare tour in the UK throughout the month of April:

The folk club scene in Sussex has always been "traditional performer friendly" - witness recent guest list at the Royal Oak in Lewes which includes regular visits by The Coppers as well as Hannah Hutton, Bob Davenport & the Rakes, Kevin Mitchell, Sheila Stewart, Will Noble, Norma Waterson, plus their Sussex Singers Nights when they put on traditional performers from the area.

Some coming visitors to the Royal Oak which may be of interest to readers include:-

Other Sussex folk clubs that are putting on things of interest include:-

The Folk Song Society was founded in 1898 as an endeavour to preserve for posterity the traditional songs of England and further afield.  Its supporters included many of the influential figures in the art music world of the time.  The first singers collected on behalf of the Society were the Copper family from Sussex.

Under the inspiration of Cecil Sharp and largely within the framework of his theories, the Society established itself as a centre for research and scholarship.  The 1950s-1960s saw a huge rekindling of interest in folksong collection and performance.  Many today owe their introduction to the subject to such notables of this second revival as Alan Lomax, Ewan MacColl, A L Lloyd, Seamus Ennis, Hamish Henderson and Peter Kennedy.

The influence of the Folk Song Society (and its continuation as the English Folk Dance and Song Society) has been far reaching.  This conference will highlight the shifting perspectives of modern scholarship in this field; it will provide viewpoints of the past that are both celebratory and critical, while offering a vision for the future study and research of folksong in the twenty-first century.

The conference will be held at Halifax Hall in the University of Sheffield, England.  The conference fee is £26.00 (£16.00 concession) plus £85.00 for full board and accommodation.