Many people will know that Doc Rowe has been filming the repertoire of the late Freddy McKay over a number of years, and has made a number of lengthy interviews.  It is intended to combine this with material shot by David Chapman for the British University Film and Video Council history project in 1994 - to make a celebratory video of Freddy's life.

Inevitably, the only stumbling block is one of funding - the hire of professional editing suite to make the final edit is expensive ....  BUT maybe there is someone out there that knows of facilities available freely or at a low rates.  Can you help?

Also, although much has already been done, there are other tasks that people may like to help with - transcribing interviews, for instance.  These are essential since shot listings are made from these and a rough assembly produced.  Basically it is a question of listening to the interviews (on audio tape) and making a verbatim transcript ...  a touch typist would be ideal and a computer essential.

Similarly, Doc has no end of material that also needs transcribing (even summarising would make it more accessible).  It does however need to be typed onto computer disc so that time codes and shot listings can be added later.  A fantastic opportunity to listen to the likes of Willie Scott talking about his life and songs - fifteen hours of recording!!! Sounds too enjoyable to be a task, you may say - certainly you'll hear material you won't find elsewhere.  Another film that Doc is producing is one on Jane Turriff and, if you saw the provisional edit at the National Festival last year or have seen Jane, you'll not be surprised to hear there is over nine hours of that material as well! 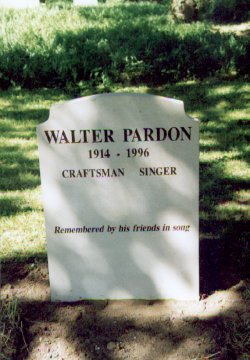 Our regular readers will remember that a Memorial concert was held in London, earlier this year, to raise funds to contribute towards to cost of a grave stone for Walter.

Doc passed on this photo to MT just the other day and I felt sure many of you would be happy to see that Walter now has a fitting and permanent memorial in his local churchyard.

A couple of tours should prove of interest to readers in southern(ish) England:

Hannah Hutton will appear with Sandra Kerr at:

Two of Northumberland's finest.  Hannah is a lovely subtle singer with a fine repertoire of local songs, ranging from Classic Border Ballads to more recent compositions by local bards.  She won the open section of the Rothbury Traditional Music Festival singing competition in 1994.  Sandra's instrumental skills and mixture of modern and traditional songs make her an ideal partner for Hannah.

Readers will have had notice of a tour by Mick Quinn and Patricia Flynn in November.   Unfortunately, this has had to be cancelled, but, in their place, Kevin and Ellen Mitchell will appear at:

Two beautiful singers, in quite different styles - not to be missed.

ATHENS - Sotiria Bellou, a leading singer of traditional rebetika songs (often described as the Greek blues), died on Wednesday, two days before her 76th birthday.  She died of throat cancer. 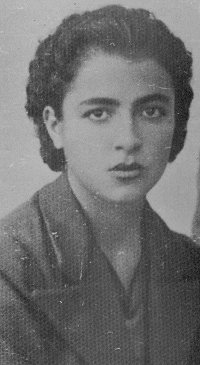 Ms. Bellou's turbulent life included a jail sentence for trying to blind her abusive husband by throwing acid in his face.  She had married him against her father's wishes when she was a teen-ager and he was a bus conductor in the provincial town of Chalkida.  She was sentenced to three years in prison but was released after serving only a few months.  She never remarried.

When war was declared in 1940, and Italian and German troops invaded Greece, she moved to Athens and became involved in the Communist-led resistance.  She was briefly jailed by both the Nazis and the nationalist Government forces in December 1944.

She taught herself to play the guitar and eventually began singing in public.  As a child she had sung in a church choir under the guidance of her grandfather Sotiris, a parish priest whose name she adopted as her own.

Vasilis Tsitsanis, a popular composer and singer of rebetika music, saw her in a club and introduced her to the world of studio recordings.  The success of her early records encouraged her to try the rebetika style, which until then had been the province of male singers.

Over four decades, she produced scores of hits and many best-selling albums.  She also toured widely, cutting a distinctive figure with her short-cropped hair and thick-rimmed eyeglasses.  Her songs reflected her roots in poverty, and she soon became celebrated as a bard of the underprivileged.  No immediate family members survive her.

Dignitaries as well as thousands of ordinary citizens came to her funeral on Friday.  Her last wish was to be buried in Athens in First Cemetery beside Tsitsanis, the man who led her to stardom.

A fuller Obituary and further details of other Rembetica performers and their music can be found at: http://www.geocities.com/Athens/3124

Freddy McKay died on 21st March 1997.  Belfast-born, he lived for much of his life in London, where he was a much-loved performer on the folk scene.

I am privileged to have known Freddy McKay for some 30 years since the days of the legendary folk club at The Fox, Islington Green.  It came to be said that the mark of a good club was "one Freddy McKay goes to" and even in fading health after an operation last year he continued his visits, including our Musical Traditions Club and Sharp's at Cecil Sharp House, where he was still encouraging younger singers with a feeling for the tradition, just as he had helped and encouraged me over many years.

From Belfast - "a very good place to come FROM" - Freddy had a wonderful range of songs from the North and from Dublin where he had worked, although many will remember him best for his brilliant comic monologues.   Adapted from music-hall star Billy Bennett and writers such as Crawford Howard, Brian Jaques and others, Fred adapted these to suit his own inimitable style, his performances always guaranteed to lift the spirit!   Meeting for the first time a couple of years ago at the National Folk Music Festival, Hamish Henderson and Freddy developed an immediate rapport, Hamish relishing Freddy's witty delivery and comic timing.   I was treated to a feast of impromptu entertainment as I gave them a lift together on the way home .

Freddy was determinedly non-sectarian and used the humour of monologues such as St.Patrick's Return and Big Willie McPhee (written by friend Packie Byrne) - where Catholics and Protestants alike get their heads bashed together for unChristian actions - to make a serious point.   Similarly, he would put together The Old Orange Flute and The Fenian Record Player, mocking extremism, while his own poignant Belfast in My Tears expressed his feeling of loss for the home town he had left as a young man to seek employment.

Freddy was a man of great integrity who lived his life by clear principles.   A lifelong member of The National Secular Society and a free thinker, Freddy was proud of the fact that he was thrown out of the Communist Party for his unwillingness to toe the orthodox party line and devoted his energy to defending workers rights as a shop steward.   He put his views across clearly according to the rule "Stand up, Speak out, Shut up, Sit down" and extended the hand of friendship to many through his involvement in the Trades Union Movement and leftwing organizations such as Unity Theatre.   He and his wife Teresa fought Camden Council so that they - and the others in their street in Gospel Oak - gained "a house for a house"- no fobbing off with a flat - when their street was demolished.   (I was in the backing band for Fred's song about this for the radio).   Fred's stories about this, and other struggles, were hilarious. but shining through was always the man's determination to live life by right principles and see that justice was done.  "The truth is always good enough for me." he would say.

Freddy would often end a performance with a poem by James Young:

" ...There's the warm and friendly neighbour With the quick and helping hand And the ties of blood and kinship And the friend that understands... Let us hope for wit and friendliness Before it is too late For we're here for such a little while And there's just no time to hate."

In his 82 years Fred brought wit and friendliness, pleasure and inspiration into the lives of the many people he met through work and through music and he will be much missed and much remembered.  Sincere sympathies to his wife Teresa and his family. 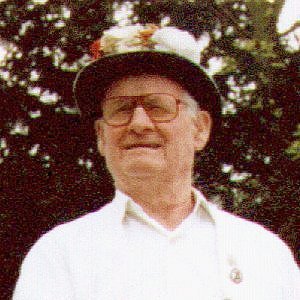 Francis Shergold, long time squire and inspiration of Bampton Morris has at last been recognised by EFDSS with the award of a Gold Medal.  Francis, 77 and with fast-failing sight, retired from his post earlier this year, and this recognition of a lifelong career comes at an appropriate time for the side and its erstwhile leader.  When a man has dedicated 60 years of his life to ensuring that the skill and spirit of the world's most famous morris side is concomitant with its history and reputation, he's paid his dues.

The medal was awarded at the EFDSS National Gathering at Cecil Sharp House where the Bampton Dancers were invited to dance immediately after the presentation speeches.  I was shocked at the Society's odd and singularly patronising expectation that the Dancers would attend the National Gathering and perform, but were not to be paid even their expenses from Oxfordshire, because, as the Society's Chairman informed them, 'it is something of an accolade to be asked'.  The Dancers are of course gentlemen, and not one of them would have wanted to inject a sour note on Francis' grand occasion, but the Society's attitude is rather striking in that it seems to believe that the (traditional) 'Activity' supports the (contemporary) 'Interest Group', rather than the other way round.  When the tradition is reputedly more than 300 years old, isn't this extraordinarily arrogant?

Surely it's time for the Society to rethink this preposterous conviction of self importance?  If the Society is not there to serve the Tradition, and apparently it is not, what is its purpose, and why is so much anguish expended every time it has a financial crisis, which might mean its demise?  We may note that the EFDSS HQ is called Cecil Sharp House, not John England Hall or William Kimber Chambers (respectively the first singer and musician collected by Sharp), which tells us something about the influence and aspirations of middle class collectors of yesteryear - and also appears to reflect the attitudes of their followers today.