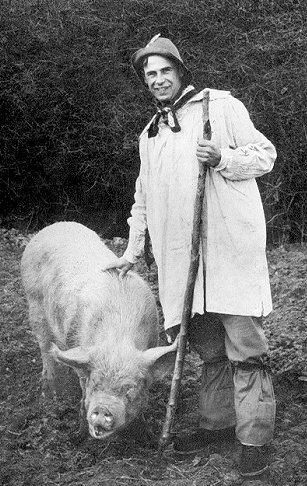 Known to his friends as 'Laddie', he was born in Burwash, East Sussex on August 29th 1905.

He became the Sexton of Burwash Church, hence his stage name of 'The Singing Sexton'.  He also worked as mechanic, a milkman and machinist.

He made four recordings in 1929, The Old Sow, Buttercup Joe, Sarey and To Be a Farmer's Boy

During his short career he was taken by Jack Hilton to appear with Laurel and Hardy in Berlin and with Flanagan and Allen at the London Palladium.

His also appeared on the BBC Picture Page programme with Leslie Mitchell and Joan Gilbert.

After joining the war effort with the RAF he was sent to Canada, and continued to entertain the troops.  He was forced to leave the RAF after being injured swinging a propeller, and suffered chest and breathing problems thereafter.

He continued to perform locally, accompanied by my mother and sister, Kathleen and Janet Oakley, and sang all his songs at my wedding reception in 1968.

He was also a loyal Brighton & Hove Albion supporter and used to accompany me to matches.

In 1976 he come into my garage in Burwash to pay for repairs to his car, joking that he didn't want to "pop off" that night with people saying he owed money.

At home that night he passed away watching television.