I've been to a marvellous party!  Unless you live in London perhaps, the Barbican wouldn't seem the most obvious venue to meet practically everyone you know, but that's what happened.  Last Saturday, I was fortunate enough to be in at the end of a whole fortnight of Gypsy culture presented at the Barbican under the umbrella title The 1000 Year Journey.  The rebarbative Barbican, so hard to find one's way about, and impossible for the disabled, was humming with Gypsy culture from all over the world; in every square foot of its mass there were films, exhibitions, talks, foyer recitals, concerts, and a massive buzz of enthusiasm - so much for William Hague echoing the voice of the people!

I arrived early for the afternoon concert in the Garden Room, The Music of British Gypsies and Travellers, and took coffee on the terrace in the sunshine.  Lovely - I got caught up in a discussion of the London mayoral election with two total strangers, who also no longer live in London - how we cling to our roots!  - and watched the people gather for the afternoon's entertainment.  The British concert was the tiniest part of what was on offer - there was also the wonderful Goran Bregovic Weddings and Funerals Band (of Underground fame) from Serbia, and Kek Lang from Hungary, both free in the foyer, films and workshops, and The Seagull in the Theatre - though I did see quite a few familiar faces.

Once in the Garden Room, a fair-sized conference-type venue, it was like a very select folk festival, though some of the audience wouldn't normally be seen dead at such an event: Tony Engle, the sainted John Brune (there should be a footnote about this ...  well, the story goes that when Ewan MacColl made The Travelling People ...).  Apart from those people on the Barbican mailing list, who buy tickets for anything and everything as soon as they are available (and you can only wonder what some of them made of the proceedings), the place was definitely ours.

Reg Hall, nowadays so much a champion of British Gypsy culture, hosted a very special line-up indeed.  Sheila Stewart and Norma Waterson were what might be called headliners in amongst a select group of less well-known performers.  Vic Legg started off, all self-effacing charm and gorgeous, infectious singing.  He really is a national treasure who should be 'treasured' a lot more; it's so easy to 'not remember' the few stalwarts like Vic, very much part of the tradition but with an understanding of the strange ways of the folk scene.  Is it perhaps this understanding that seems in some way to diminish his importance in the eyes of those who could ensure that many more people were made privy to the talents of this very special performer?

Lynette Eldon danced in North of England clog style, to the fiddle playing and singing of Jim, her expertise and his faultless rhythm impressing the audience as ever.  But it was Vic's cousin, Tom Orchard, who took the prize for stepdancing that afternoon.  He played melodeon, and danced, and also played sometimes for the stunning reedy singing of his wife, Jean (Norma's distant relative).  I can't recommend the Dartmoor Festival - just after Sidmouth - highly enough, for the chance of seeing these two in action.

Norma was just lovely, warm, glorious Norma, immeasurably the best English singer of her generation.  It is impossible for this woman not to move any company to laughter and tears with her singing, and she certainly did both that afternoon.  Sometimes I feel that Norma is another singer who does not get all the credit she deserves as a superb exponent of English unaccompanied singing, since she dared to make a 'pop' record of the songs that she grew up with!  For goodness' sake, isn't that what we all sing - even traditional singers?  Anyway, her first ever solo record of traditional songs is well on its way, so maybe that will satisfy some of the carpers.

Sheila Stewart, with the stunning new (Doc Rowe recorded) CD under her belt, was relaxed, singing songs from all of her family these days, since Belle is gone, and Cathie no longer sings.  Although she was thrilling when she sang some of the ballads for which she is so well known, a high point for me was to hear her sing Busk Bonny Lassie, with her son Ian on pipes; this is a song which her sister Cathie used to sing to her father's goose accompaniment, and, although Sheila sings so much like her mother, the echoes of Cathie and Alex were poignant and delightful.  I last saw Ian in Blairgowrie in 1970 when he shyly sang Rocking the Cradle and he still favours these folksongs, sung with guitar, rather than unaccompanied family songs.

Speaking of which ...  the main surprise and overwhelming delight of the afternoon was Ambrose Cooper, grandson of Harry Lee whose fiddle playing was recorded in Essex in 1962, by Steve Pennells & Ken Stubbs, and published on Topic's Boscastle Breakdown in 1974.  Ambrose Cooper certainly knows how to keep the music alive, while in the Gypsy style we know of from Jasper Smith (he of Will There Be Any Travellers in Heaven?) he sings modern and old songs with guitar accompaniment.  He sang The Farmer from Chester with exactly the same text that Rod and I heard from Jack Smith of Godalming in the late 60's, but with guitar, a slightly altered tune (to accommodate the guitar?), and two extra final verses.  I imagine he sings locally in pubs and clubs, he's far too skilled to be a total amateur, but I'm pretty sure that this was the first time he had encountered an audience like us - I'm not getting into who 'us' is, but we aren't the working class manual workers, who I would think were his usual audience, and the Gorgios in the audience far, far outweighed the Gypsies.

Though ...  one more surprise awaited us.  When Reg pointed out that there were no Irish travellers present, a young woman stood up and said she was Irish, a Gypsy, and would like to sing.  This was Judith Byford, from northern Ireland and married to a Gypsy from Essex, I think.  She had never been on a stage before, but nothing daunted she got and gave it all she'd got - singing self-penned songs about Gypsy life, and some traditional songs, as well.  Damn well done, her!

Rather than a 'star turn' to finish, Reg suggested that everyone who had performed might like to play together - boy, that was a lengthy and fairly riotous finale, with Tom Orchard dancing himself to a standstill.  What a concert!  Several people said loudly how good it was, asked why it didn't happen at other times, and suggested the National as an obvious place for a repeat performance.  Does John Haydon read MT, I wonder? 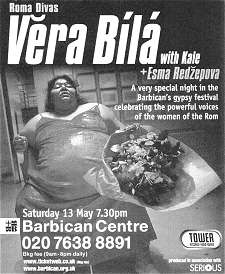 And then ...  and then, I went to another concert, still in the Barbican.  No doubt many of you will have been as impressed (is that the word?) by the publicity picture of 'the amazing Vera Bílá', absolutely huge and imposing in a scarlet satin frock.  This, I (with many others) thought, I must see.  It's probably not a very PC way to intrigue a potential audience, but the Saturday evening concert entitled Roma Divas was sold to me by that astonishing picture; in my defence, I do know a little about eastern European Gipsy music, I have 'been there and done (some of) that', and I thought I knew what I was letting myself in for.

There were two 'divas' billed for the concert, Esma Redzepova from Macedonia, and Vera Bílá from Czechoslovakia.  I went to the concert with Ron Kavana, and we were sitting in our very good, very central seats when Redzepova opened the first half.  I'm afraid I can tell you little about this diva, as her performance was completely overwhelmed by her band - clarinet, two trumpets, accordion, keyboards and percussion.  This group played in the recognisable format of the aforementioned Weddings and Funerals Band, loud, brash, exciting - and promising, until they descended into relentless, unmitigated farce; they appeared to be playing on, as well as at, speed.  At the point where they gathered round the mic, Andrews Sisters' style, to sing in coy harmony Ron turned to me and said 'Marx Brothers' just as I said 'Spike Jones'.  By then we were so near hysteria we had to excuse ourselves, lest we upset the hundreds of thrilled punters around us.

Once in the bar, we could hear Redzepova over the sound system - and jolly good she was, now that we could hear her and not the band.  I felt then that is was a great pity that the performers/organisers had not had the confidence to allow the excitement of the singer and the songs to be experienced, rather than 'pep' the music up with a wild circus.  I look forward to hearing Redzepova on record, and letting that experience expunge the memory of this one.

We returned to our seats just before Vera Bílá and Kale came on stage.  I really cannot say too little about this performance.  Kale is a group of two guitars, bass, and a percussing vocalist.  They played what I can only describe as the very worst type of Sangria music, such as is heard all over Europe on package holidays.  There was nothing to recommend it at all.  The playing was less than competent, less than tuneful, Radio 2 schlock.  And Vera Bílá?  For the most part she and the percussionist sang vocals.  For the time that we could bear to be in the hall, six or seven numbers, she sang two songs, not particularly impressively or well.  If this is what passes for Roma music in Czechoslovakia, there must be some very easily pleased, undiscriminating tourists.  I do know, I have heard, the true Roma music of eastern Europe, and this ain't it!  Nonetheless, as we left, yet again mightily pissing off those who had to let us through, the audience was stamping and roaring its approval.

This whole experience left me pondering on the power of publicity and hype over the power of the people's music.  The small afternoon concert had been packed, and 90% of the audience had been long time enthusiasts, converts and aficionados.  If the huge audience for the evening concert had been made up of the same types of people, could they possibly have felt anything less than very aggrieved indeed?  Possibly the answer is, give the people what they want, but not before telling them what it is that they want - don't for goodness' sake let them discover it for themselves.  And this is how Gypsy Music becomes the new flavour of the month, the new 'world music', the dilute, accessible, non-challenging pop music for the 'thinking' classes.

There we have it, then.  I saw two concerts, one almost unpublicised, yet exhilerating and unforgettable, and the other, publicised for weeks in advance on billboards and in the national media, insulting in its musical poverty, which I can't forget soon enough.

So: unhyped, unknown British Gypsy music continues to be unkown, integrity intact, and in this way it will survive; while the vastly hyped, vastly sponsored, vastly profitable world-wide Gypsy music product becomes ever more pappy, indistinguishable and musically impoverished until it finally limps off to join other long-forgotten fads and fashions.