It was entirely by chance that my wife and I found ourselves going to Portugal's capital city last week.  After a pretty hectic, unpleasant and extremely noisy October and November we had decided that a few days away, and if possible warm, would be just the thing to prepare us for the rigours of Christmas and the Millennium stuff.  The local travel agent had been unable to match a price, destination, hotel and plane with our tiny window of possibility, until we said "What about city breaks?"  After much keyboarding, she said "I can do you four nights in Lisbon - and it's not currently effected by the bad weather further north."  It was only on the way home that we remembered that Lisbon is one of the two homes of the Fado!

It turned out to be one of the best holidays we'd ever had - in fact, the only 'proper' one ... staying in a hotel, sight-seeing, eating in restaurants, like real tourists.  And the weather was gorgeous - sunny and quite warm for all three full days.  Lisbon is a delightful city, and it's old part is right in the centre, on the river - and where everything seems to happen.  We had a very pleasant 3-star hotel on the main square for less than £30 per night, with train, metro, bus, tram and funicular services within a minute's walk.  The funicular cars are needed because the old city is built on seven hills, and while the little tram cars seem capable of climbing the most extreme gradients, there are some places even they can't get to.  Public transport is excellent and ridiculously cheap - a day ticket giving access to every type, any journey, as often as you like, costs just £1.50.

So we trammed extensively through most areas of the old city - Bairro Alto, Chiado, Baixa, Mouraria, Alfama - and saw lots of beautiful sights.  Much of the centre was flattened by an earthquake in 1755 and was rebuilt in grand style during the next half century.  There seems also to have been another building (or rebuilding) boom in the early 1900s, judging from the number of Art Nouveau and Art Deco facades you see amongst the 18th century buildings.

All this would have made for a very enjoyable little holiday and well-needed rest - but there was a bonus - the Fado.  Paul Vernon's book on the subject (reviewed in these pages) lists some dozen 'currently active fado houses' in the city - many of which are in the Bairro Alto district (literally) just above our hotel.  We were recommended Cafe Luso as the best of the nearer ones, so the first night found us eating pretty good food, drinking extremely good wine and listening to the music there.

The 'show' consisted of a grupo folclorico and five fado singers plus two accompanists.  Inevitably, I suppose, the group were first - two accordions, girl singer and eight dancers going through the motions, uninspiringly, in traditional dress ... I was about to ask for my money back! ...

but then the two accompanists came on and played a short introductory piece of instrumental fado.  The instruments are the guitar and the viola - this translates as 'Portuguese guitar' and 'Spanish guitar', so be prepared to be confused for the rest of my description.  They were very good indeed - but we didn't know how good until they began accompanying the singers.

The first of these was a woman in her late 40s who sounded pretty much like many of the recordings on the CD accompanying Paul Vernon's book - this is sophisticated cafe music - rhythmic, passionate but controlled, with plenty of 'presentation' and awareness of the audience.  She gave us three songs.  I was now content - if not exactly happy.

The next singer was a young man in his early 20s, who was the opposite of the previous singer in almost every respect.  He sang in almost 'free rhythm', yet the guitar and viola followed him perfectly. 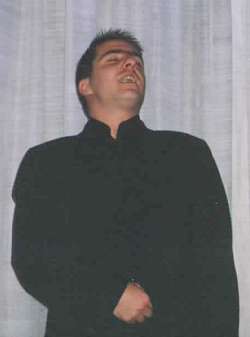 By watching, of course - their eyes never left his face throughout the songs.  His singing was certainly passionate (sound clip), but without any of that 'throwing yourself about' passion that Latins so often employ.  He sang more like a sean-nós singer, with his head slightly back, eyes closed, one hand in his pocket, the other gripping his belt - and hardly moved.  Nor did his audience - we were all spellbound!  That one song would have made the entire show worthwhile, but we got six others later.  The other singers performed in much the same manner as the first, and the best of them (or the one who appealed to us most) was another young man of no more than 18 years of age.

This format was followed throughout the evening - grupo folclorico, instrumental, two singers, short break with the lights up for serving and clearing away food - and repeated, three times, I think.

The last singer was our charismatic waiter, who was very good in the conventional style, and was joined by the 20-year-old for a duet as the final song ... it was truly wonderful (sound clip).

Some things we noticed: despite being a large room seating over a hundred at a guess, no PA was used - guests were expected to shut-up and listen; the waiters did not attend tables during the solo singing; no performers were introduced - no names were given.  When the show finished, a little before midnight, a substantial number of new guests arrived and took tables in the back part of the room, away from the stage.  We assumed that this was a private party of some sort.  Somewhat drunk and extremely happy, we paid our bill and tottered off down the thousand and one steps to the hotel.

The following day (our first full day) we did far too much sightseeing and walking the beautiful mosaic pavements up very steep hills, and were too knackered to do more than have a meal and an early night.  The next day we went to a different fado house for the evening.  The food and the grupo folclorico were better, the singers weren't - in fact, the whole atmosphere was different.  The music was just an adjunct to an evening of food and drink - rather than the reason for it.  We decided that, rather than risk disappointment on our last night, we'd return to Cafe Luso - and, as it was only in the next street, we popped in on the way home to book a table.  The influx of late visitors we had noticed on our earlier visit was now explained ... they had come for the 'after hours' informal session - of which we caught the last song.

The next evening we ate elsewhere to minimise costs and arrived at Cafe Luso at 9:30 when the show starts, to drink, listen, record and take photos.  The show was much the same, though one of the two female singers had been replaced by a quite elderly man with considerable gravitas, and the 18-year-old was missing.  The bloody grupo folclorico did precisely the same set, and I think some of the singers repeated songs we'd heard previously - it's difficult to be sure when you don't know the language.  The lovely duet finished the evening again at about 11:30.  We fell into conversation with some English people at the next table and almost didn't notice that the informal session had started at the back of the room.

This was just wonderful - everyone left in the place moved to tables at the back and the waiters pulled huge curtains across the room to shut-off the main dining area with its stage.  Perhaps 25 of us sat around a few small tables within feet of the singers.  First up was a girl of scarcely more than 16, who sang beautifully, with great assurance and maturity. She was followed by the older man, the woman, and the waiter - each had three or four songs and the whole thing lasted for about an hour and a half.  This was the important part of the evening for the singers - you could tell - and they all clearly enjoyed being able to sing the songs they wanted, to an almost entirely Portuguese audience, who treated the performances with enthusiastic respect (and we felt that getting the recorder or camera out was inappropriate to the circumstances).  Nor was it the audience one might have expected - we we probably the oldest people there, many were in their 30s, and one table of six gay friends were all in their early 20s.

The same two accompanists had played for almost four hours - for maybe 30 songs - and it was obvious that this (presumably nightly) session was in no way profitable for the club's owners ... few drinks and no food was served, yet few of the staff went home.  Everything we had seen led us to believe that Cafe Luso exists to serve the music (and has done since 1930) - and to provide a stage for young singers - but that they have found a way of doing it which is sufficiently profitable to be a clearly successful business, yet remaining an obviously respected music venue (as it has since 1930).  We were greatly struck by the quality and seriousness of the three young singers we'd heard - and most particularly by the young man whose singing had so moved us on the first night, since his style was quite different from all the others.

As most Lisboetas speak some English, we spent a while talking with some of those involved, before going back to our hotel.  The young singer is Pedro Moutinho; his father and brothers also sing, and his style (which sounds far more 'traditional' than is usual) is entirely his own.  "It is not the Coimbra or the Lisboa fado style ... I do not copy other singers ... I try to be different, to be only like myself" he told us.  Our lovely waiter is Filipe Acácio, who had a CD out a few years ago, but now has none left to sell and would like to make another.  The guitar player is Professor Edgar Noguera, who does have a CD - titled 'The best soloist in Lisbon' - and the superb viola player is António Neto - who now plays for Mariza.

We have no idea if Cafe Luso is the best fado house in Lisbon, nor if any of those in the more isolated districts are any less 'commercial' or tourist oriented.  We would only suggest that, based on our very limited experience of the city and its music, you could do far worse as a venue for a short (or longer) holiday.  And the three young singers we heard certainly give us hope for a revival of a traditional music in a modern industrialised western European country.