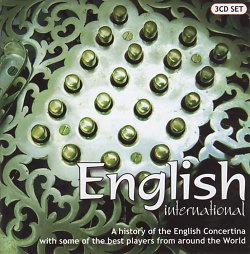 Something of an unusual offering here - a triple CD of English concertina music from across the world.  Some of the players can justifiably called traditional, as can a good majority of the tunes played.  According to the very well-produced 48-page booklet, none of these tracks have been commercially published before, several of them can be termed 'archive material', and most have been specially recorded for this publication.  Some readers will realise that this is the companion volume to the Anglo International 3-CD set I reviewed here back in 2006 - and almost all of the comments about it remain the same.

It's a very professional-looking package, presented in a fat VotP style case, with a substantial booklet which provides a mini-biography of each player and sometimes a bit of background to the tunes.  Not as detailed as MT readers might wish, but it's a pretty good job - and not really aimed at the likes of us.  Further, most of the tunes are very well recorded, and those which aren't - the archive material - have been cleaned up pretty well.

I'm not going to do a long and detailed review, since much of the 4 hours of music is rather outside the scope of this magazine, but a few general comments can reasonably be made.  I described this earlier as English concertina music from across the world, so it's worth clarifying that the performers come from thge UK, USA, Ireland, Germany, France, Denmark, Holland, and Russia.  That said, I think it's a bit of a shame that such a substantial proportion of the music is either Irish, or 'Celtic' influenced.  Further, that those players who have developed the most advanced techniques seem, for the most part, to have sacrificed much of the quality of their music to mere technical virtuosity.  Unlike the Anglo, the English concertina lends itself far more readily to the classical repertoire and style of playing, so there's very little here which could be described as traditional in style.

Anyone who likes the concertina will enjoy this fine set of CDs, anyone on the lookout for some good and less well-known tunes will find plenty here, and I honestly think that almost anyone will enjoy much of the 4 hours of music on offer here.  You can buy it at: www.rootsrecordsonline.co.uk for Ł25 inc UK p&p.