Walter Newstead of Cockthorpe was one of the most active and renowned musicians along the stretch of North Norfolk coast for much of the Twentieth Century, playing the melodeon, and later piano accordion, in various bands across the area and considerably further afield, since he first started playing in pubs at the age of 17 in 1929.

Walter Henry Newstead was born at Stibbard on 5th May, 1912, the eighth of ten children of William and Eliza Newstead.  His father was steward on a farm at Stibbard owned by the Case family and when Walter was two the family moved to another Case family farm, Manor Farm at Cockthorpe. 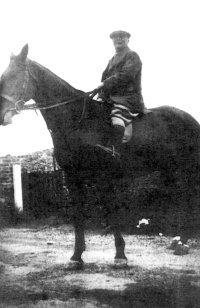 Apart from a few years at Stiffkey when he was first married to Rachel in 1939, Walter spent the rest of his working life in Cockthorpe, following in his father's footsteps, working first for Major Case and then his son John, first as farm labourer, then gamekeeper and finally, when his father retired, as farm steward.  A total of fifty one years service was rewarded with a long service medal, given by the Duke of Kent at the Royal Norfolk Show.  In common with so many other land workers, Walter saw service in the Home Guard in the Second World War.

The family as a whole was musical, William playing the concertina and melodeon and Eliza step dancing, as Walter commented: "See, we always had an accordion;

As far as the children were concerned, as well as Walter, brothers Nicky and Ernie and sister Madge all played accordion and George played the fiddle.  Around the years of the Second World War and after, the Newstead family played as the Cockthorpe Band; "had two fiddles and two accordions", as Walter remembered.  The other fiddler was Billy Dodds and the band was in much demand for social dances, playing the old country dances such as various polkas, the Viennese Waltz, the Barn Dance and the Long Dance. 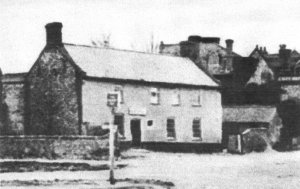 During the war, when the local population was swelled by the ranks of soldiers stationed at Stiffkey and elsewhere, the Friday night dances in places such as Wells Assembly Rooms were packed.  In addition, Walter played in a great many pubs in the area, such as Binham Chequers, Warham Horseshoes and Langham Bell, providing music for the sing-songs, often together with banjo player George Thompson, as well as with the piano-playing landlady of Morston Anchor, Ann Mary Bullimore.

2  At that pub there was a room on the side of the building, known as the "Barn," which was used for country dancing.  On occasion Walter accompanied local step dancers, such as Dick Hewitt from Briston and Jacky Jordan from Wells.

Regarding his family's music making, Walter recalled: "Yes, it would be in the pub mainly.  Where we lived there was no shop, no post office anywhere.  We used to get about five gallons of beer and get indoors.  A couple of families would get in and we'd have a real good tune-up.  That's what it used to be like."  He remembered that his mother would step dance in Blakeney Tophouse and Stiffkey Victoria: "They'd say, "Come on Lizey, give us a step dance."  And then, even quite old, she'd have a go." 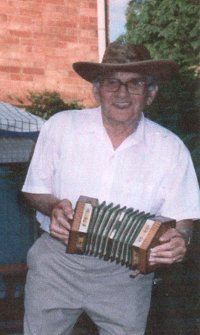 Walter's wife Rachel came from Shropshire and, on occasions visiting her family in that county, Walter would get drawn into playing with local musicians, as he recalled: "I'd be there about a fortnight, then I'd stay at my mother-in-law's.  They used to say, "I hear you've got an accordionist here.  Can they play; we've got some fiddlers coming in?"

Walter was highly regarded as a musician in his community, but was missed by the collectors and enthusiasts looking for such music, and his playing wasn't recorded until Des Miller and myself did so in December, 2004.

3  His playing was still strong, even with his advanced years, and his repertoire contains much of what might be expected in an East Anglian country musician's repertoire: Sheringham Breakdown

4 for step dancing, tunes used for polkas, such as Golden Slippers, Oh Joe, The Boat Is Going Over

5 and Bluebell Polka, many waltzes, such as Peggy O'Neill, and a large amount of popular songs, including Play To Me Gypsy and It's A long Way To Tipperary.

One amusing anecdote concerns Walter drawn into a seasonal attempt to earn a few pence, as related by him: "Christmas Eve … a little fella, he hadn't ever got much money; well, he used to sit in the pub all night and if anyone would give him a pint … so when I'd finished there, "Will you come along of me, Walter?" he said. 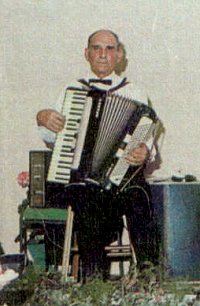 "We'll have some money somehow."  Took me to one of the biggest houses, and he say, "What're we gonna sing?"  "I tell you what I'll do; I'll follow you."  Well, he started singing, out come the window and the man shouted, "Thass enough, in fact too be much!" and he threw the coins on the ground, and we never did find the coins!  We nipped outta that quick!"

Walter's speciality 'party piece' was apparently to step dance whilst playing both the melodeon and mouth organ at the same time, although both he and Rachel maintained that it was not something he generally did in public; more for the amusement of family and friends!

He continued playing in public until very late in life, switching to the piano accordion for public performances.  Well after the Second World War he had a band called The Accordionaires with Ivan Ebbage

6 (piano accordion) and Kenny Tuck (drums), often with a pianist and double bass player too.  The band was in great demand, playing for dances in village halls all over North Norfolk.  His daughter Sheila Jenkinson commented that, "He played all over Norfolk at dances, dinners, shows, etc, sometimes not getting home until 1 am … and being up to get the men to work by 7 am," and Walter's wife Rachel added: "We danced the polka all night!"  The titles of songs and tunes played by the band, and by Walter as part of a duo, were written down in two books, as Rachel Newstead explained: "The red book is the ones he played in the pubs.  The other one is what they played for the dances."  Taken together, the two books contain an impressive list of dance tunes and popular songs, all of which Walter knew from memory.

Walter was often called upon to play for Wells carnival, as Rachel remembered: "They used to go to the carnival at Wells; they used to go in the fancy dress and they went as the black and white minstrels, they went as an all-girls band, they went as Mexicans …"  Later still he played regularly in care homes across the area.  He continued playing at home for his own pleasure – both a melodeon and piano accordion – right up until his death, at the age of 93, in February of this year.

1. Melodeons, both of the one- and two-row varieties, were almost never referred to as such by older generation East Anglian musicians.  They generally called them accordions, or sometimes just musics.  Some North Norfolk musicians called their one-row melodeons 'out and home again', referring to the different notes produced by the in and out action of the bellows.  Walter had both one- and two-row melodeons as well as a piano accordion, and was experienced in playing them all.

2. Ann Mary Bullimore, landlady of Morston Anchor can be heard on Folktracks CDR Ftx 328 Norfolk Village Songs And Dances, where she describes the local variant of the Long Dance to Peter Kennedy in 1952, as well as playing the tune Rig-a-Jig-Jig, used for that dance, on the pub piano.

3. The recordings were made by Des Miller and myself on 10/12/2004 at Walter and Rachel's home in Binham, Norfolk, and were mastered and digitalised by Paul Marsh in early 2005.  They form part of the Rig-a-Jig-Jig archive of information relating to Norfolk's traditional music.

4. Basically a variant of the Four Hand Reel, Sheringham Breakdown was a very popular tune for accompanying step dancing in the area.  Walter referred to it as the Norfolk Stepdance.  For a comparison with another – well-known – North Norfolk melodeon player, hear Percy Brown's playing of the tune: Topic LP 12 TS229 English Country Music From East Anglia; with Bob Thompson (melodeon) playing for 'Shrimp' Davies' step dancing on Folktracks Ftx328 CDR as above; and as part of a medley of hornpipes on Veteran cassettes VTVS05/06 The Pigeon On The Gate.

5. The song Oh Joe, The Boat Is Going Over has long been popular as a polka tune amongst East Anglian country musicians.  Once again, Percy Brown's version can be heard on Topic LP 12TS229 as above and on VTVS05/06 as above.  Mike Yates has a fascinating article on the song and tune: Oh Joe, the Boat Is Going Over – But Which Boat? at www.kyloerecords.co.uk/Articles/OhJoe.htm

6. Ivan Ebbage was a local postman who, as well as playing the piano accordion, also played the dulcimer, having been lent one by a teacher from Wells school.

A selection of Walter's tunes, as recorded by Chris Holderness and Des Miller, 10.12.04: