The State of Arkansas has contributed a number of fine singing groups to country music including Dr Smith's Champion Hoss Hair Pullers and Hillbilly Quartet, Pope's Arkansas Mountaineers, and the Wilburn Brothers to cite just a few. 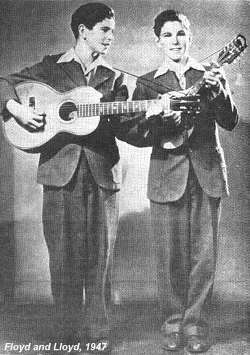 Among the best of these acts are the Armstrong Twins.  Born in Dewitt, Arkansas, January 24, 1930, Floyd and Lloyd Armstrong were not the first in their family to perform country music.  Their mother, Lois, played piano, ukulele, and autoharp and for a few years worked with Edna Durfee on KLRA, Little Rock, as 'The Sunshine Girls'.  Her sons began their professional careers in 1935 when they did a gospel number, Walking Arm in Arm with Jesus, on a kiddies' show over KARK, Little Rock, and they soon became regulars on the station's Boy's Club Saturday morning talent show.  Shortly afterwards they also worked on another local program, 'Gathright Pay-Off'.

During this early phase of their career, Lloyd played the guitar but that changed in 1938 when their father took him to a pawnshop in North Little Rock.

"He took me to the Square Deal Pawnshop .  I'll never forget It .  Daddy took me over there and had me to pick something out.  They had a whole row up on top.  I said I'll take that little thing right there.  I didn't even know what it was.  It's a wonder I didn't pick out a tuba.  It just happens that a mandolin goes with the guitar."

After that Lloyd played the mandolin and sang harmony while Floyd played the guitar and sang lead in the style of the great brother duos of the time The Blue Sky Boys, Bill and Charlie Monroe and the Louvin Brothers.

Throughout their school years the duo performed with several Little Rock groups like James Evans and the Dixie Mountaineers and the Flying X Roundup Gang and also won many prizes with their playing.  Because this was during the Depression the winnings rarely consisted of money.  Floyd recalls:

"We won hounds, sacks of groceries, whatever there was but we didn't win much cash in those dogs, because there wasn't much cash around."

In 1946 the Twins went into the music business full time.  Their family moved to California and the young performers appeared on a talent show in Spade Cooley's ballroom in Santa Monica; they easily won a spot on Cooley's radio show.  From there they worked with Stuart Hamblen, then moved to the T Texas Tyler radio show, then on to Cliffie Stone's 'Dinner Time Roundups' on KXLA in Pasadena.  On the latter show the Armstrongs worked with Merle Travis, Tennessee Ernie Ford, and other country music stars of the day.

On weekends, the Armstrongs usually played at dances.  For two years they performed every Saturday night at both the 97th Street Corral, a popular Los Angeles nightspot, and for a big dance in El Monte, California.  Many of the big name movie stars came to hear them and the brothers recall that two especially enthusiastic members of the audience on one occasion were Bing Crosby and Claudette Colbert.  During this time the Armstrongs also made their first recordings, on the Four-Star label.  Their initial sides consisted of Carolina Cotton's Three Miles South of Cash in Arkansas and their own Mandolin Boogie, a reworking of the Delmore Brothers' Hillbilly Boogie.  Eventually the twins made eighteen more sides on Four-Star and, although, these met with some success, they did not record again for over a decade.  That they did not do more sessions during the 1940s and 1950s is attributable to a number of factors.  First, the company they worked for was sold: second, they moved away from the recording centres, third, the Armstrongs did not actively pursue a recording career, preferring to concentrate on live performances, radio and television shows.

Along with many other country music acts of the era the Armstrong Twins appeared on border radio.  Don Pierce of Four-Star Records would put the shows together from material taped in Pasadena, California, and send it to some of the more powerful Mexican stations like XERB, Rosa Rito Beach, Baja, California, XELO, XERF, and XEG.  At the same time Pierce was putting together border station shows by the Maddox Brothers and Rose, T Texas Tyler, and Cousin Ford Lewis.  Thus, it happened that these performers took turns being guests on each other's show.  For example, at 11.00 the Armstrong Twins Show would be aired with special guest T Texas Tyler and at 11.30 the T Texas Tyler Show would come on with special guests the Armstrong Twins.  The next day the Twins would have the Maddox Brothers and Rose as guests and would be guests on their show.  In this way all of the performers got much more exposure than they could have received from merely hosting a fifteen minute show.

Lloyd and Floyd worked for about five years on the border stations and consider this a most valuable experience and, in some ways, an important one for their careers.  The Mexican stations were more powerful than their counterparts in the States.  Indeed, some Mexican stations could be heard anywhere on the North American continent.  Therefore, any artists appearing regularly on programs aired by these outlets could expect to become well-known over a large area of the United States.  This popularity in turn enabled the musicians to secure performance dates more easily than they might have done otherwise and there can be little doubt that the radio spots helped to sell records.  So, although the programs on the border stations directly benefited the Armstrongs little (they had to pay for the shows), indirectly they paid for themselves many times over.

Although, as a result of their record and radio work, the Twins could have obtained bookings in just about anywhere in the United States they stayed primarily in California.  Generally their personal appearances were in the area between San Diego and San Francisco.  Yet even in this relatively small region there were simply more opportunities for personal appearances than Lloyd and Floyd could possibly handle, so they had no trouble keeping busy.

During this period the eldest Armstrong girl, Patsy, began performing with her brothers.  She served both as a singer and instrumentalist, playing the steel guitar, on the radio shows and in personal appearances.  Beginning while she was still in high school, Patsy remained active as a musician until she married in the early 1950s, although neither of the other sisters, Carolyn or Donna, ever worked in music. 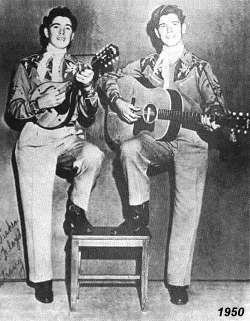 Always a close family, today the five children and their parents live in and around Little Rock, Arkansas.

In 1950 the Armstrongs left California and moved to Odessa; Texas where they worked for the next two years.  Then, after a short time away, they returned for another year to Odessa, their media efforts being sponsored this time by the Pioneer Furniture company.  During these three years Lloyd and Floyd had twenty-six fifteen minute shows overs stations KRIG, KECK, and KOSA-TV in Odessa and KJBC and KMID-TV, Midland, Texas.  First on the air was a 'live' 6:45 - 7:00 slot every morning on radio station KECK in Odessa.  With their numerous weekly appearances on local radio and television the Armstrongs were the biggest country music act in town and as a result just about every name entertainer that passed through Odessa appeared on their show.  They remember one guest performer who was particularly well-liked in Texas and soon became an international favourite: his name was Elvis Presley.

During the early 1950s the Armstrongs moved to Nashville for a short period but had difficulty making a living there with their type of music.  There were many brother acts in country music at the time and even the novelty of being the only twins in the business didn't help Lloyd and Floyd get many engagements.  For two weeks they lived off popcorn supplied by a friend who was an usher in a downtown theatre.  This experience convinced them they might be able to fare better financially elsewhere.  Certainly they could eat better someplace else.

The next few years brought steady employment in music and some near misses that might have brought them greater stardom.  They were strong contenders for roles in the movie, From Here To Eternity, but eventually the two parts were cut to one and that went to their friend Merle Travis.  A couple of years later Sam Phillips planned to record the Armstrongs with Jerry Lee Lewis but that deal also fell through.  Lloyd and Floyd remained active throughout the 1960s but, because their style of singing featuring acoustic instruments and no recording gimmickry appeared old-fashioned to most record company executives of that era, they received only a few opportunities to record.  One 45 was released on Wayne Raney's Rimrock label but, due to poor distribution, did not sell well.  Then, in 1969, the Armstrongs tired of show business and retired, Lloyd earning his living as a mechanic and Floyd as a carpenter.

For exactly a decade the Twins remained professionally inactive but did not give up music altogether.  They still performed informally at home and for such functions as local church programs and benefits. 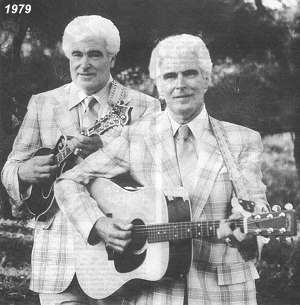 Then, in 1979, Chris Strachwitz issued an album of sixteen sides by the Armstrong Twins originally released on Four-Star in the 1940s.  A friend of theirs saw the album in a Pennsylvania record store and sent it to them.  They then contacted Strachwitz who arranged for them to do a new album which was recorded in October, 1979 at the Ozark Folk Centre, Mount View, Arkansas.  This LP, released in August, 1980 as Just Country Boys, showed that the Armstrongs had lost none of their musical abilities over the years.  Indeed, many thought that they now sounded better than ever.  Their performance at the Ozark Folk Centre in June, 1979 marked the Twins' first professional appearance since 1969 and was highly acclaimed.  During the past five years they have also played at the Frontier Folklife Festival in St Louis, the National Folk Festival at Wolftrap Farm Park, Virginia, and on a tour of Ozark traditional musicians sponsored by the National Council for the Traditional Arts.  At all of these engagements they have been enthusiastically received.  They are very interested in working regularly in music again and would like to get more bookings.

Stylistically the music of the Armstrongs consisting of traditional ballads, gospel songs, parlour tunes and novelty songs of their own composition, is in the tradition of the great brother duos of the 1930s and 1940s and the Delmore Brothers, the Blue Sky Boys, and Roy Acuff are among the musicians who influenced their music, but the Twins have developed their own distinctive approach.  Their tight harmony singing is some of the best to be heard in country music today and they are also outstanding instrumentalists.  More importantly, they are outstanding human beings and it is good to have them active in music again.  As is noted in the program book for the 1980 National Folk Festival their return:

'...means that a new generation of listeners will be able to appreciate their musical virtuosity, versatility, and artistic integrity.'

Eight Thirty Blues / Great Speckled Bird / I Want To Be Loved / Thank You For Setting Me Free / Stuck up Blues / There's Been A Change / Greenback Dollar / I Reap My Harvest In Heaven / Why Not Confess / Old Three Room Shack / Wall Around My Heart / Silver Haired Daddy /On the Banks of the Ohio / Beautiful Brown Eyes.