Self published.  No ISBN number 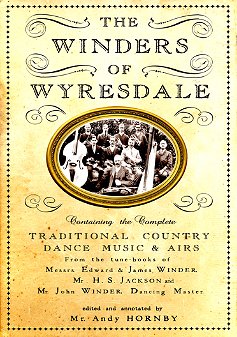 This is a splendid collection of tunes from four Lancashire MSS books, three from members of the Winder family of Wyresdale in Lancashire and one from John Winder the dancing master.  He was known to the Winder family, but does not seem to have been related.  The earliest date is 1789 (in John Winder's book), and James' last entry is dated 1842.  John was a professional dancing master who worked around north Lancashire, while the other three were farming people who played for dances and in church bands; many others of the family were musicians, and this continued in the for the next 100 years at least.  James' son Tom, for example, danced the Greensleeves dance (see below) for Cecil Sharp in 1911; along with the Bartle Dodding and Septimus Brindle (who sound a very Hardy-esque pair).  Titbits like this are the reason this is such a good book; Andy Hornby has done sterling work in researching the background to the notebooks and filling out the story behind the music.

We find here the classic tunes that have formed the back-bone of our traditional dance music since they were written down.  Surely the majority of our fiddle and melodeon players now, two hundred years later, will still be familiar with the following tunes (though they may seem hopelessly old hat to some of the indefatigable sessioneers of the English country music scene): The Irish Washerwoman, Soldiers Joy, Staten Island, My Love She's But a Lassie Yet, Off She Goes, St Patrick's Day in the Morning, Merrily danced the Quaker, Miss McLeod's Reel, Drops of Brandy, The Wind that Shakes the Barley, The Liverpool Hornpipe, Haste to the Wedding, The Girl I Left Behind Me, The Fairy Dance, Harvest Home, the Cuckoo's Nest and The Princess Royal.

We also find a good selection of more locally or regionally specific tunes, that have not travelled so far or become universal: Kendal Ghyll, Calgarth Hornmpipe, Hark to the Whitendale Hunt, High Road to Galloway, Cheshire Hornpipe, Lord Strangers Hornpipe, The Waddington Tune, Pilling Moss, The Chester Hornpipe and so on.  More treats lie in the more archaic tunes, a fine selection of the old 3/2 hornpipes that still seem to have been going strong in early 19th century north Lancashire, though rapidly receding into history further south.  Many of these tunes of the previous age were, of course, only waiting for the current folk revival to be reanimated in strange and wonderful new ways.  I am sure The Cobbler's Hornpipe went out of circulation pretty quickly after being written down in James Winder's notebook, but it rose again phoenix-like in the hands of Eliza Carthy and the Ratcatchers two centuries later.  I am likewise sure that this book will play an important part in the next phase of the current revival.

Use the book with an instrument in your hands and you are bound to find some treats, familiar and unfamiliar.  Give the Fiddler a Drink is a fine jig, and I applaud the sentiment.  Another good jig is Behind the Bush in the Garden ... so what was going on there then?  Mumbo Grumbo is a tune name that invites attention, as does Kick My A**e (sic) as an alternative name for Greensleeves.  The explanation for the latter is given in some detail in the book, with notation for the rumbustious dance perfomed to the tune; the dance indeed involves kicking other dancers' a**es.  Hornby quotes Tom Pearcy's comment on this dance, that it was "a bit on the rough side and was more often done at weddings and parties, than at dances".

One reason I would particularly recommend the collection to anyone interested in the fiddle music of the British Isles lies in the geographical location of the Winder family's locus operandi, north Lancashire from Lancaster south and west into the hills.  Various attempts have been made to locate the centre of the British Isles, or the UK, or of Great Britain, using all sorts of criteria: whether to count all the islands in and so on, and whether you include Northern Ireland, or the whole of Ireland, or none of it.  Anyway, one calculation puts the centre at Wyresdale Road which runs out of Lancaster towards Wyresdale.  Another places it at Whitendale Hanging Stones near Dunsop Bridge, seven or eight miles west of the Winders farm.  A glance at the map will also show that Wyresdale where the Winders lived is a stone's throw from the old A6 road, the west coast main line railway, and the Lancaster Canal that ran from Kendal to Preston.  It is near the ports of Lancaster and Glasson Dock, and well within reach of the other west coast ports of the day; Liverpool, Fleetwood (at the mouth of the Wyre), and the Cumbrian ports further north.  Wyresdale may look from London (or Sidmouth or Towersey) as a distant parochial outpost.  In terms of the British Isles it is smack in the middle, geographically and historically; and of course, as we can see in the context of this book, it is also central in terms of traditional musical culture.  At Lancaster there is a very narrow gap between the coast and the hills, so historically everyone, absolutely everyone, went through that gap, and their tunes travelled with them.  Luckily the Winders had their ears open.

The Winders knew the old tunes, stemming from England, Scotland, Wales and Ireland.  Equally, they were familiar with the tide of European mainland music then starting to flood in, with any amount of quadrilles, waltzes and so on.  Incidentally, these MS books missed the polkas, by a hairsbreadth, as the Winders' noting of the music came to a stop in 1842.  With remarkable precision, William Irwin, the Cumbrian fiddler who was a few years younger than this Winder generation, noted in his MS tunebook that the popularity of polkas started in 1843!

So I am sure the Winders will have played polkas as the fashion changed; they seem to have completed their notebooks at very young ages and then played on afterwards.  This is a fact which is worth some consideration, but not in this review.  There is a wealth of research to be done, and it is very interesting to speculate why people wrote down the tunes they did, and why they wrote them when they did.  So do buy this book, and give it some thought.

It is customary, when writing a review of a book of this nature, to point out any errors you may have spotted.  This is to show you did actually read the book before writing the review, and also to prove how erudite you are yourself.  Afraid I couldn't come up with much: I would say that La Bastringue is probably French-Canadian, rather than Cajun as Hornby suggests.  I am also by no means convinced that the tune title The Moon and Seven Stars refers to the Pleiades, but who knows?  Also, and this is something I am quite confident about, my name is Stephens, not Stevens.  Other than that, top marks: a great collection of tunes and an extraordinarily informative amount of well researched and well written background material.  It is always the explanatory notes on the music that make or break a collection of folk songs or tunes; this kind of music carries the story of the culture with it.  It was Baring-Gould's skill in this direction that first attracted me to the study and practice of English music, and Andy Hornby nobly follows in this fine tradition of interesting erudition.  I have a lot of English tunebooks on my shelves, and this is now the stand-out example.  Anybody interested in the music of the British Isles needs a copy.

You can get the book at: www.andyhornby.net/Winders.html  price Ł20 + Ł3 P&P.