Note: place cursor on graphics for citation and further information.
The new MP3 player for soundclips requires that the latest version of Adobe's Flash Player is installed. 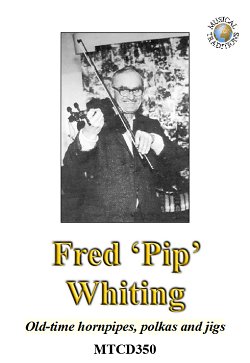 This latest recording from Musical Traditions showcases the fiddle tunes of Suffolk fiddler Fred Whiting.  A remarkable musician, singer and player of both the bones and dancing dolls, it is great to see a CD devoted entirely to his extensive repertoire of fiddle tunes.  Fred Whiting was the last of the older generation fiddle players in East Anglia, and this alone makes the collection of tunes greatly worthwhile.  He was unusual as a traditional musician in several respects: he was left-handed and played the fiddle as a conventional right-handed player would but left-handed, so the strings were the 'wrong way' round, describing himself as a 'fiddling freak' in this respect.  He also spent many years in Australia and picked up tunes there, thus having a broad repertoire beyond the East Anglian material he picked up in his early years.

He also took the trouble to learn to read music - and picked up more tunes from various printed sources, most notably early on from Honeyman's Strathspey, Reel and Hornpipe Tutor.  This in itself would raise the cry from some that he wasn't a traditional musician at all, and certainly Cecil Sharp wouldn't have considered him so, but whereas he is unusual in becoming musically literate, he is not unique in this respect.  Norfolk fiddler Walter Bulwer for example had a large collection of printed music, as Phil Heath-Coleman's notes state.  Walter and his piano-playing wife Daisy spent evenings playing through their collection of sheet music - undoubtedly much of this would not have been remotely 'traditional' at all.  Reg Hall referred to Walter Bulwer as a 'vernacular violinist' because of this, but he was describing a man who knew a quantity of country dance tunes but who also lead a dance band which played for a wide variety of dances, both old, traditional 'county' dances and the popular ones of the first half of the Twentieth Century.

Not so with Fred Whiting.  Here we have a man who is in every respect a 'fiddler,' playing tunes learned from older musicians, in particular Harkie Nesling, from whom he got several tunes, despite their playing styles being rather different.  This of course was the usual way for traditional musicians, and commonplace: to give other examples of East Anglian fiddlers, Herbert Smith of Blakeney acquired tunes from Emmerson Shorting and Harry Cox from his father Bob.  Fred Whiting added to this repertoire from other sources, and this CD reflects this, being 'devoted to Fred Whiting rather than to East Anglian traditional music,' as the notes state.

The recording has been compiled by Phil Heath-Coleman from the hundreds of recordings that Fred made for Keith Summers, Carole Pegg and others, and represents the various aspects of his repertoire.  The CD has been subdivided into sections to reflect this.  It starts with '50 years ago by ear', most appropriately with Pigeon on the Gate - a stripped-down version of the tune, very similar to the way Harry Cox played it, most definitely for step dancing, where the tune is reduced to the bare bones for that purpose.  This is followed by a selection of mainly hornpipes learned by ear in his early years, including two versions of Soldier's Joy, sounding very different from each other.  Fred's solid sense of rhythm is evident throughout, although he does seem to rush Fisher's Hornpipe somewhat, nearly tripping over himself at times, although not quite doing so!  There's also several classic jigs, including the Irish military marches Garyowen and St Patrick's Day, well known to many East Anglian musicians, probably through old 78 rpm records, and a wonderful untitled polka (track 15) .  This has long been a favourite of mine, and having played it to fellow musician Des Miller, he remarked that it sounded Australian.  Fred couldn't recall the source, but it may well have been one that he picked up during his time in Australia.

The next sub-section 'the advantage of playing by music' gives us another four hornpipes learned from Honeyman and other printed sources, again displaying Fred's solid, steady rhythm.  Then follows 'an old Gypsy hornpipe' which comprises tunes - mainly hornpipes again - most of which Fred associated with Gypsies.  There are some wonderful tunes here: only one of them - Whiskey You're the Devil - has been recorded from anyone else.  Of the others, there's Billy Harris' Hornpipe , a schottische tune which Harkie Nesling got from Gypsy fiddler Billy Harris, and four other tunes unique to Fred.

Next we have 'exactly as it's written', mostly hornpipes yet again, learned by Fred from printed sources as well as a wonderful version of the waltz Over the Waves , with its gloriously high B music - Fred plays this much as Gypsy fiddler Harry Lee did.  There's also a duet with Harkie Nesling with the song tune Killarney.

Finally the CD ends appropriately with 'a smashing hornpipe for step dancing', seven tracks of live recordings from Brundish Crown in the 1970s.  Here we have Fred's music in the context of its social setting and wonderful it is too.  Here he plays for Wattie Wright's step dancing and Cecil Fisk's dancing dolls , as well as a recording of him playing bones to accompany Font Whatling's melodeon playing.  The atmosphere in these live tracks is electrifying - great examples of East Anglian pub music.

On that basis alone, together with some of the early tracks on the CD, this is a recording of East Anglian traditional music, by a very fine exponent of the art.  But it's much more besides - the tunes learned by Fred from Irish musicians in Australia and others he picked up from tune books give a rounded picture of the man and his music.  East Anglia once had many traditional fiddlers and Fred Whiting was the last of them.  Fred's singing and fiddle tunes are available on several CDs of East Anglian music but it is great to have a showcase of his fiddle repertoire.  His solid, rhythmic playing and the large amount of tunes not recorded from anyone else make this essential listening for anyone interested in southern English traditional fiddle playing.

The CD is also only the second full-length recording devoted to an English fiddle player, the other being the Musical Traditions recordings of Stephen Baldwin, another project put together by Phil Heath-Coleman.  As is usual with Musical Traditions releases, it comes with a detailed booklet, giving lots of Fred's reminiscences about his music playing over the years, together with some wonderful photographs.

This is great stuff.  On occasion, Fred's playing reflects his age when recorded, but this is a collection of great recordings of a talented musician.  The stories in the booklet complete the picture of Fred's life and music - and there's some cracking tunes to learn as well!  The CD is titled 'Old-time hornpipes, polkas and jigs' and if you were to add 'plus a couple of schottisches and a waltz,' there you would have it, exactly as it says on the tin. A wonderful recording of a great English traditional musician.