’Tis What It Is 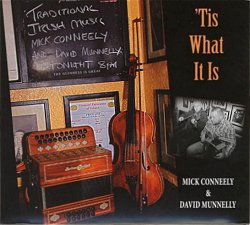 This is a CD from Galway city based musicians.  Munnelly comes originally from Belmullet in Mayo and Conneely was born in Bedford, England of Irish parents.  They are accompanied by Ryan Molloy on piano, Jonas Fromseier on banjo and everybody's bodhran player of choice Johnny McDonagh.  David Munnelly has played on over a dozen CDs, solo, and in various duets, bands and ensembles covering a wide range of genres and this CD presents what he describes as his own unique Irish musical sound.

There's an interesting quote on the back of the CD cover saying this is 'a raucous encounter between chaos and melody'.  The listener must decide which comes out on top.  The first track sets a wild mood, two barn dances kick off with what sounds like an American hillbilly rhythm and when they switch into the second tune, you are left wondering what you are listening to.  Napoleon crossing the Alps is a stately old march associated with County Clare and often played by Mary MacNamara or Charlie Piggott, but in this version it is barely recognisable under a torrent of superfluous notes.

Things get a little easier on the ear when Danish banjo player, Jonas, joins in as his contributions are pretty much true to the tune.  Overall the style is very busy, with hints of the way music was played on 1920s 78s with a lot of staccato playing and triplets.  The set of jigs, starting with the Rakes of Kildare using the melodeon, probably signposts that link to the 20s most strongly.  While the tempo isn't overly fast, they play around the beat so much that you just can't tap your foot along to the music.  Spontaneity is too often lost to well-rehearsed, and admirably well synchronised tricks and twists, as in the set of reels starting with the Jolly Tinker.  While the execution is skilled, it ends up sounding processed and rather lifeless.  Melodic variations stray too far into changes to the tune for no good reason.

The way this CD has been recorded and engineered is not what you expect from an album of traditional music.  The two main instruments sound very closely mic-ed and the way the record is mixed or engineered creates a real 'in your face' sound that is very intense.  There's no space around the music and you need to take a break after four or five tracks.  It's possibly what the musicians themselves want to hear but it creates a very harsh tone across the whole record.  The accompanying instruments including Conneely's double tracking on bouzouki on over half the tracks, seem to add to the muddled sound that lies behind the lead instruments.

The detailed notes about all the tunes are from the Fiddlers Companion website.  On a couple of occasions the musicians credit their own source for the tune, and in both cases it's Ben Lennon who generously wrote an introductory dedication for the CD.

Though not perhaps to the taste of people who like truth to the tradition and the more natural lift, melodic variation and pulse in traditional playing; this will appeal if you like the energetic attack of Frankie Gavin's De Dannan and his disciples.

It is available from either of the musician's own websites, Custy's and other on-line shops.