Here we have a debut CD of English songs by a couple of people I don't think I've come across before.  Emily sings and plays low whistle and fiddle, 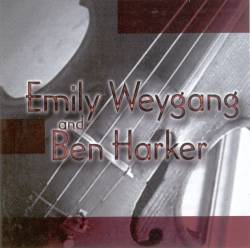 Ben plays guitar.  11 of the 13 songs are traditional; the other two, by Paul Weller and Billy Bragg, fit in without sounding out of place.

Emily has a nice, warm, tuneful voice and, best of all, employs almost none of the vocal affectations one so often finds in revival singers.  Ben's guitar parts are equally admirable; and for much the same reasons.  The song selection is good: Australia, Maid Freed from the Gallows, Maid on the Shore, Ratcliffe Highway, Lakes of Coolfinn, Butcher's Boy, Short Jacket and White Trousers, Cruel Mother, Black Dog and Sheep Crook, The Flash Lad, Adieu to Old England.  But what do they do with them?

Well, none of the unnecessary and unpleasant things which so many younger performers seem to believe is required - so plenty of Brownie points there.  Emily does not allow herself to be tied to the steady rhythm of the accompaniment (all but one of the songs are accompanied), and Ben's style of playing allows her space to vary the pace when required.  She's also able to make small melodic variations and a few, if sometimes rather obvious, rhythmic ones.  More positive points.

The booklet gives some sparse details of the songs, and always cites a source - albeit that many of these are books, rather than traditional singers.  There's only one major error that I noticed - they say that they thought they'd got Ratcliffe Highway from Roy Palmer's book, but find that his appears to be a rather different song.  It is!  Their song is actually The Deserter - probably the Purslow one which appeared on a number of revivalist LPs in the '60s and '70s.  It mentions Ratcliffe Highway in the first line, but there the resemblance ends.

Sadly, I can't find much else to praise.  Almost inevitably, young singers, new to the music, tend to concentrate on what the songs sound like - rather than what they have to say about the human condition.  The result, in this case, is that they all sound the same.  Worse, every verse sounds alike!  You get no impression that Emily has the faintest idea of what she's singing about.  Take Australia, a song I know well.  In the first line of the second verse, she sings 'I fell in with a fair maid, she was handsome and gay' in exactly the same way as she does the first line of the last verse - 'Australia, Australia, I would ne'er see thee more!' - although there ought to be a world of difference in the sentiments being felt ... and in the feelings being communicated.

Not only do the songs all sound the same, this 'same' is slow, dull, lifeless!  One longs for a flash of passion; a glimpse of the singer emerging from behind the song to say "This is important to me!"  I find it very difficult to listen to any of the songs - even the marginally more lively Flash Lad - right through to the end without beginning to feel sleepy.  There are some fine songs here - his is not how they deserve to be sung!