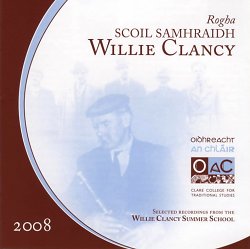 Oidhreacht an Chláir is an organisation which aims to provide education in the traditional culture of County Clare.  Part of that aim includes a permanent archive of material relevant to traditional arts.  A major contribution to that archive is the annual recitals and concerts at the Willie Clancy Summer School held in Miltown Malbay every July.  Last year OAC issued a double CD of highlights from the Saturday night gala concert in 2007.  This year they have issued a two CD set of excerpts from the various recitals held during the week in 2008.  Each concert is dedicated to a different instrument, fiddle, flute, concertina, accordion and of course uilleann pipes.  In addition there is an evening of sean-nós singing and one of old time dancing.

As with last year's CDs, the musicians are mostly solo with a few duets but given the nature of each concert there is no accompaniment on any of the selections.  With a couple of exceptions, the recording quality is generally good, although sometimes the miking is very close.

The fiddle selections offer the best music, Tony Linnane is one of the masters of the instrument and his duet with Mick Conneely is a real treat of fierce fiddle playing.  Maire O'Keefe and her sister Aoife make a great job of the hornpipe Johnny Cope very reminiscent of Julia Clifford's playing of the tune.  Vincent Griffin is now in his late 70s but his playing still sounds strong and by the time he hits the last of three reels, he's in full swing.

The box playing is dominated by sliabh luachra polkas and slides.  The highlight is without doubt the recent Gradam Cheoil winner Charlie Harris.  His short selection is full of creativity and power that shows how closely he's studied Joe Cooley's style.  The concertina selections are mostly from Clare musicians and the stand out player is Dympna O'Sullivan, although it's nice hear veteran Clare man Tom Carey on his duet with Jackie McCarthy.

There's a strong influence of the travelling piper in the uilleann pipes selections.  Mickey Dunne plays two selections; his chanter and regulator playing on the slow air The Cursed Kerryman show a confident musician with a very well tuned instrument.  Mickey plays from the heart.

The flute selections are a bit disappointing.  Conal O'Grada plays very exciting music but these two selection appeared on his recent CD so there's nothing new.  The reels and jigs from a group of four Sligo/Roscommon flute players are just too muddy to be enjoyed.  It would have been so much better to have a couple of duets instead.

Recording set or step dancing is always a difficult prospect.  Even when you've seen old style solo dancing, it's not the same experience on record as the live audience gets, and the whoops of encouragement only frustrate the listener.  These selections don't really work, partly because the tunes are old chestnuts that aren't strong enough to stand up on CD.  The singing selections are mostly sean-nós airs from Connemara and Cork.  Sean-nós can be something of an acquired taste but Eamon O'Dannchadha's Amhran Rinn Mhaoile is a great example of the art at its best.  The two tracks from the Saturday gala concert are both vocals, the rather maudlin Lament for Willie written by Junior Crehan and a rather too self-referential song from Cor Cuil Aodha.

As with last year's release, the sleeve notes are very basic.  Unlike last year though, a lot of these musicians haven't recorded elsewhere so the listener is pretty poorly informed about who some of them are, other than names and where they were born!

This CD set stands as a selection of the music played at the concerts that could be used as a reference for students of Irish music looking for examples of style or settings of tunes - not what you would play regularly for entertainment.  There are some great selections in the 34 tracks but you would need to strip the record down to about a dozen tracks to make it attractive commercially.  All proceeds go to support the work of OAC and the CDs are available from their website: www.oac.ie