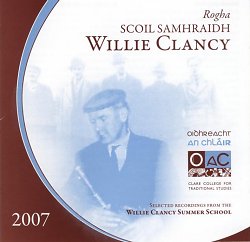 Each July the Willie Clancy Summer School, a week-long festival held in Miltown Malbay, Co Clare, honours Willie Clancy, piper, singer and one of the great characters of traditional Irish music.  The festival ends with a gala concert featuring dozens of the musicians who have been teaching or playing during the week.  This two CD set presents a selection from the concert of Saturday 14 July 2007.

You might think the recordings would be full of piping after the great man himself, but sadly, there is piping on just two of the 34 tracks.  What you do get is a feast of nearly 70 great, mainly well known, tunes played by musicians from the four provinces of Ireland in a concert setting.  They are mostly duets with a variety of instrumental combinations, with some ensembles, and four songs.  As might be expected, considering the Co Clare location, the tunes are mainly reels and jigs but there are a few slides, some mazurkas, barndances and two airs.  Generally there are two tracks form each line up, a set of reels and a set of jigs.

Star of the set has to be the two sublime Tommy Peoples solo tracks, so well recorded so you can hear every scuzz of the bow as if he was sitting in front of you.  You can't help getting caught up in the twists, turns and spins he weaves with the notes.  All but one of the tunes are Tommy's own compositions.  The reel Pat McHugh's and Julia Devine's jig were new to me and they fit so well with Tommy's style of playing with unusual changes to the parts.  The other outstanding fiddle track was Martin Hayes's ten-minute performance, without accompaniment, where he does the build up from slow air to climax often seen in his live performances.

Among the great duets/trios there's the lovely combination of concertina and fiddle from Edel Fox and Ronan O' Flaherty with Jack Talty's piano accompaniment, and again from Noel Hill with a more lilting fiddle from Liam O'Connor.  Their mesmeric Foxhunter's slip jig goes round and round mimicking the pipers 'voicing' of fox, hounds and horses before finally breaking skilfully into the Foxhunter's Reel.

The uilleann pipes and whistle combination of Séamus Ó Rócháin and Brid O'Donohue was clear, tight and very enjoyable.  This track provides the best link with Willie Clancy, Séamus plays on the Coyne set that Willie brought back from his time in London and Brid was a neighbour and learned some of her music from Willie.  This track, with the low-pitched whistle and pipes blending sweetly together, is one of the great surprises of the set.  Mary Bergin's delightful whistle duets with Mick Conneely on bouzouki were also first class.  The Congress reel is misnamed as The New Mown Meadow, one of a few misnamed tunes that the sleeve notes seem to acknowledge in saying that tunes are identified where possible.  Stephen Madden's banjo playing was strong and steady with plenty of lift.

Joe Burke, the only solo box player represented, was on good form applying his usual style of continuous flow to play a couple of his party pieces, a set of hornpipes including the Smell of the Bog and the great Coleman reels Bonnie Kate/Jenny's Chickens with some of Coleman's variations and twists.  John McEvoy and John Wynne accompanied by Jacinta McEvoy were a joy to listen to with unusual settings of The Wandering Minstrel and Happy to Meet learned from Roscommon flute players Packie Duignan and Patsy Hanly.

Brendan McGlinchy accompanied by Ian Roome gave us an interesting and unusual slow air version of his own composition Splendid Isolation before going into the more well know reel version which showcased Brendan's skill well, as did the Gooseberry Bush and Julia Delaney's reels.

The McPeakes School set was marred by a wandering mix but still created the excitement of the dancing.  Like the two other tracks with the sound of dancers' feet, I'm not sure how it would come across if you have never seen it done.  If you have, of course, the battering makes perfect sense of the music.

The ensembles generally worked less well, mainly due to the challenges of mixing in concert hall setting.  This led to the sound mix being rather muddy and wandering annoyingly.  Occasionally the volume faded badly or changed from track to track and the applause sometimes sounded like a very distant shower of rain.  One of Oidreacht an Chlair's objectives is the establishment of an archive of recordings including the concerts and recitals at the Summer School.  If they put another CD together perhaps they will be more selective in what they include; omitting tracks which aren't engineered to commercial standards.  They might also want to give more consideration to the track order to leave us on more of a high at the end of each CD.

I am not sure about the wisdom of including songs in a predominantly instrumental set of CDs, especially a seven minute one 'as Geilige'.  Cuaichin Gleann Neifin is a relatively well know Connemara air, but for those without Irish the story will remain a mystery as there is no translation in the scant sleeve notes.  However Nan Tom Teaimin's singing was remarkable - passionate and powerful.  Margaret Stewart sings a lament in Scottish Gaelic, which presents similar frustration for the listener.

It's a shame there was not more piping, box playing, or flute led duets but these CDs provide a great library of mainly well known tunes for people who like to hear the tune, clean and clear with some outstanding tracks to treasure.  The CD is available for the OAC website www.oac.ie