Farewell to the Green Fields

Own Label - no number

Caroline and her Young Sailor Bold, Molly Bawn Lowry, The Iron Door, The Prison Across the Way, The Trampwoman's Tragedy, The Hills of Inishowen, The Outlandish Knight, Ranter's Wharf, Timothy Briggs, The Nobleman's Wedding, Bruckless Bay, Leaving the Land.  Duration: 52:05

This is a good record of a good singer of English and Irish traditional songs, which also includes a number of modern ones in the mix. 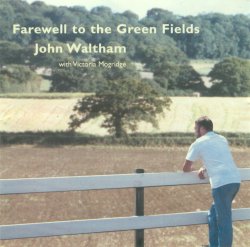 It also includes some instrumental accompaniment.

Since I have never heard John sing with instrumental accompaniment before, I rather wonder why he chose to include it here.  In my opinion it adds little, and detracts a good deal, from my enjoyment of the CD.  Many of John's songs are ballads and therefore require that the story be told - and it's usual for good ballad singers to achieve nuances of emotion and drama in their storytelling by, among other ploys, rhythmic variations.  Track 1, Caroline and her Young Sailor Bold, suffers from an insistent 'dum-de-dum-dum-de-dum-dum' fiddle backing which, coupled with a fairly brisk pace, ensure that he can rarely do so.  The compelling ballad I've heard him deliver on several occasions is turned into just another 'song'.  Track 2, Molly Bawn Lowry, clearly shows that he's fully capable of telling a powerful and resonant story when unencumbered by such rhythmic straight-jackets.  The same could be said of The Iron Door and The Outlandish Knight.

A whole CD full of long unaccompanied ballads would probably prove somewhat indigestible, so he has wisely included a few lighter pieces of the sort that all good traditional singers have - for judicious use when the occasion requires.  The Prison Across the Way is one such, learned by John from Les Bow of Sherborne, and is a delightful example of the genre.  Another is Timothy Briggs (aka The Wooden Legg'd Parson), learned, like so many of John's songs, from Norman House of Beaminster, Dorset.  Oddly, his usual Dorsetshire accent seems to desert him on this one, and it sounds uncannily like he'd learned it from Vic Legg!

The longest song on the CD is The Trampwoman's Tragedy, that Hardy poem which Tim Laycock put a tune to over 20 years ago.  It seemed to re-surface again some three or four years ago, but I've not heard it recently.  John gives a splendid and impassioned performance - probably the best on the whole record.

The CD finishes with John Grieves' Leaving the Land, a powerful and emotional account of a farmer's having to leave his farm for economic reasons after a lifetime of commitment to it (something both Johns have had to undergo).  This also has a fiddle accompaniment, happily in free time in this instance, but which strays into uncomfortably theatrical excesses right at the end.  The song and the singing is so good that one is able to largely ignore it, mercifully.  Ranter's Wharf is another modern song, this time by a third John - Connelly - which is also well sung.

It is strange, I think, that someone who's best known for singing traditional ballads should be at his most convincing with more modern material, but that certainly seems to be the case here.  This is not to say there's anything wrong with his treatment of the older material - but he certainly sounds more as if he means it on these three newer ones.