This is a real oddity in more senses than one and none the worse for being so.  Firstly, as the title plainly suggests, this is an album featuring two instruments rarely heard in combination while, secondly, their exponent on this album is playing them together courtesy of the wonders of double-tracking. 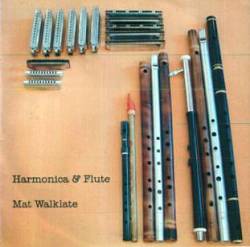 Next, the musician in question (who happens to have been born in Stoke-on-Trent to parents neither of whom is Irish) has devoted the entire CD to Irish traditional music and, lastly, has produced a very effective album.

Those who believe that a musician must have at least a few drams of the indigenous stock coursing through her or his veins to play traditional music successfully will already be dismissing the judgement of this album's worth.  However, while the inherent advantage of an Irish upbringing is undeniable, times have been a-changing for some while and didn't a US resident with no Irish familial connections win the All-Ireland Senior Fiddle title in 2002?

Now, obviously, there are non-Irish musicians who think they can play, when palpably they can't, but Mat Walklate is far from falling into that category.  Indeed, any musician aiming to learn ITM, while possibly opting for the flute, is hardly likely to settle upon the harmonica as an instrument of choice.  After all, it's not as though there's an abundance or role models or even albums to listen to while honing one's skills (the names of Eddie Clarke, the Murphys, Brendan Power and Mick Kinsella hardly roll off anyone's tongue when discussing the pantheon of the tradition's musicians!).

That is not to say that there are no problems with this album.  As Mat readily admits, it is a home-based recording - track 13 suddenly stops in mid-flow, usurped by its numerical successor - and, on rare occasions, his flute and harmonica are sometimes out-of-time and, even more rarely, not in tune with each other.  Lastly, though adequately voiced, Mat isn't the greatest of singers and his two vocal tracks, The False Young Man, and his own composition, Paper and Tin, are probably the two weakest cuts on the album.

Nevertheless, the remaining 15 tracks (or 16, if we count the truncated track 13) provide substantial evidence of his instrumental skills on the wooden flute (plus occasional whistle) and a wide variety of chromatic, diatonic and tremolo harmonicas.  His playing is predominantly easy on the ear and rarely succumbs to over-elaboration and his instruments in collaboration possibly best shine on a set of slides begun by Miko Russell's.  Accompaniment, in the shape of Séamus Curley's guitar, Seán Regan's mandola and Cormac Byrne's bodhrán, is kept simple and understated, enhancing the strengths of the melody.  Finally, the tune selection is pretty broad and indicates leanings towards Kerry, Clare and Donegal, while Mat has included three tracks consisting of his own compositions, including a markedly evocative air, Stan, in memory of his late grandfather.

Despite some of its failings, Harmonica and Flute is still streets ahead of many home-made recordings and certainly avoids most of the pitfalls exhibited by many "vanity" albums, making it and Mat's music well worth investigating.