The Voice of the People

A Selection from the Series of Anthologies
The Traditional Music of England, Ireland, Scotland and Wales

It must have been a daunting task for the editors of the Voice of the People series to create this single CD overview.  How does one even go about cutting down a luxurious 20 CD set onto one little disc?  Well, looking over the track list of this sampler, one aspect of their selection method becomes immediately obvious: there is one and only one track from each series volume. 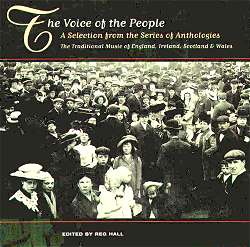 Another aspect takes only moments more to discern: each performer or group is likewise featured once and only once.  Obviously, the goal of this disc was not to present the 20 greatest performances from the series, or you'd expect at least some repetition.  Instead, it appears to be a preview, or even a 'buyers guide', presenting one track from each album as information and enticement to potential buyers of series volumes.

For those of us who have heard the whole series, this release is like a web menu of thumbnail images.  As such, it can be quite a tease, awakening yearnings for more of the same artist or more from the same disc.  For example, there's only one cut by Phil Tanner, a remarkable track of mouth music called The Four-Hand Reel (and recognizable as Pigeon on the Gate to Irish session players).  As unusual and downright brilliant as the track is, it makes me long for more of Tanner's clear, bright voice.  His version of The Banks of the Sweet Primroses is, for me, one of the series' biggest highlights, and I find myself wishing it were here as well.  Other listeners might well yearn for different highlights: Belle Stewart's composition The Berryfields of Blair, for example, which in Fred McCormick's words "summarises more than words can say what The Voice of the People is about", would be a most desirable addition.  But there's already a Belle Stewart track, her less expressive, less uplifting performance of The Two Brothers, so The Berryfields is left out.  What a pity.

Still, it's pointless to dwell on what could have been on this disc.  Readers will want to know what is on it.  So what follows is a quick review of the album's contents.

There are four Irish songs, filled with the trials of Irish daily life.  The CD opens with Paddy Tunney singing When a Man's in Love, a song that developed a certain cachet in the Irish revival due to the masterful job Tunney does on it.  Here is a supple-voiced, grace-noted rendition whose tune varies richly from verse to verse, certainly one of Tunney's best performances from the series.  An atypical emigration ballad, it involves young people who leave in search of love.  In a beautiful performance charged with pure emotion, Joe Heaney practically weeps out The Rocks of Bawn, one of his best-remembered songs.  This recording is a starker, less ornamented, and more memorable version than on his later commercial sides.  Margaret Barry's Farewell My Own Dear Native Land, with accompaniment from her banjo and Michael Gorman's fiddle, is another emigration song that promises at first to take us into more political territory.  But it avoids much talk about the politics behind emigration, and instead merely laments the parting with "all I love".  The only piece with a really rebellious edge is The Wind the Shakes the Barley, sung by Sarah Makem; it takes a nationalist and militarist position, with romantic lyrics and a melodramatic story that nonetheless contains real pathos.

There are also four Scottish songs, including Belle Stewart's aforementioned ballad.  Davie Stewart's I'm Often Drunk and Seldom Sober is a great choice for this disc, an unusually serious song by Stewart's standards, a song where drink is shown to be a false solution, sung with an intensity that makes you take notice.  By contrast, Stewart's friend Jimmy McBeath sings an upbeat comic ballad in which booze serves as a useful social lubricant; although the "auld Scottish lass" that McBeath's narrator plies with raspberry wine might wish her beau to remain nearby, neither party seems to regret their interaction.  McBeath was a master of the singalong chorus, and this song is a good example.  Finally, in a very different vein, Jeannie Robertson's version of Gypsy Laddies is a classic of the ballad-singer's art, and this is a superlative recording.

Is there any Welsh music here?  Not really.  Presumably, Wales is in the title because Phil Tanner lived in the Gower Peninsula of South Wales.  But he didn't consider himself to be a Welshman, and in any case what he sings is a dance tune common all over Britain and Ireland.  The disc contains three more dance tunes, making four in all - is this some sort of 'magic number' for Reg Hall as editor?  Will Atkinson from Northumberland provides a magnificent and lively pair of jigs on the mouthorgan, showing the Scottish influences on his region's music.  Scan Tester and Rabbity Baxter play an Untitled Polka in their well-known, crisply rhythmic style.  And a group of revelers from Minehead perform a somewhat cluttered Mayday music medley - possibly a nice document of the tradition, but not the best listening.

Which leaves us with eight songs (twice four!) from Good Old England.  Sam Larner's In Scarborough Town is interesting not only for Larner's brilliant performance but for a spoken epilogue in which he connects his song to a tombstone epitaph; this is local folklore at its most fascinating, and it's great that Hall left the epilogue on the disc.  Walter Pardon's The Poacher's Fate tells the sobering story of a few men driven by necessity to poaching, who only narrowly escape long sentences in prison; it's sung in an appropriately thoughtful and reserved style.  Three songs extol the wit and wisdom of the countryman in rather different ways; Charlie Wills's lustily-sung Up to the Rigs of London Town depicts a country boy winning a battle of wits against a city prostitute, Phoebe Smith's The Tan Yard Side idolizes the beauty of the laboring country girl, and Fred Jordan's We Shepherds are the Best of Men depicts a shepherd devoted entirely to his work and the welfare of his sheep.  Harry Cox's Just as the Tide was Flowing and Pop Maynard's The Seeds of Love both demonstrate that what might sound hackneyed in a revival context can be stunning in its traditional form.  Joseph Taylor's 1908 recording of Bold William Taylor is remarkable not only for Taylor's strong singing and the recording's excellent quality, but also for its place in the history of the revival - it is one of the songs collected and later adapted by collector/composer Percy Grainger.

How does it all hang together?  Well, in the end I think the editors did a reasonable job of compromising between the CD as music and the CD as marketing tool.  That might not sound like a ringing endorsement, and indeed I think the album could have been better listening if tracks were chosen for quality and/or interest alone.  But I also recognize the necessity of good marketing for a product as expensive and as far outside the mainstream as The Voice of the People.  If we want more releases of traditional music to sell, we need to find ways to get the word out.  This sampler is in a good position to achieve that crucial goal, presenting great performances that can serve as a prelude and guide to further exploration - see our reviews of the entire VotP Series.