Down in the Fields

Where the Wind Blows

Down in the Fields

Where The Wind Blows

Reviewing compilation albums is never an easy job as a track-by-track summary makes for tedious reading.  Yet, the reviewer wants to be fair and mention everything that is worthy. 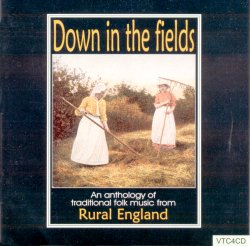 In this case a lot of these recordings are going to be quite well known, especially to those readers who are subscribers to the Veteran catalogue and buy virtually everything that John Howson brings out.  What follows must therefore be an impressionistic account of two complimentary albums.

The initial impact of these albums is one of the high quality of performance and recording.  Nearly all the recordings were made either by John or by Mike Yates.  John has selected from the forty-odd releases that Veteran has been responsible for over the last 14 years.  Given that this a relatively restricted base to select from and that geographically, the selection comes largely from south and east England, there is much here that is very pleasing indeed.

One question that immediately comes to mind is, what proportion of the pieces on these albums would not seem out of place on the Voice of the People series?  My answer would be that well over a half of the performances here would be worthy of inclusion in that series which presents the real cream of the British tradition.  Of course, there are singers and musicians that are included here as well in VotP.  My quick check reveals Johnny Doughty, Walter Pardon, Scan Tester, George Spicer and the Bampton Morris heard on both.

Much repeated listening to the great 20-album set shows just what an outstanding singer Walter Pardon was, even in the very best of company, and his gentle delivery of a fairly spiked message utterly delights here (sound clip).  Look again at the track listings at the top of this review and you will begin to appreciate how much careful thought John has given to the programming of these albums.  The first three tracks on both albums represent just about the best that the English tradition has to offer and I am particularly delighted to see Bob Lewis accorded a place in this revered company.

I am fortunate to live only a few miles from Bob and have heard him hundreds of times over the last thirty-odd years.  No 'familiarity breeds contempt' here; my admiration for Bob grows with the years and he seems to be at just about the height of his powers recently (sound clip).

Familiarity with many of the singers is indeed an asset to me in listening to these albums; a quick glance through the track listings will show a high proportion from the Sussex singers that have delighted me over the years.  Gordon Hall provides by far the lengthiest item (anybody surprised?) and the album provides the opportunity to see how different a singer he was from his mother, Mabs.  She is well represented here.

However, it is always good to encounter good singers that the listener has not met with before and there are some here that are very interesting indeed.

We get just one song from Norman Perks, but it is enough to show us that here is a singer with fine control and tone and if this is anything to go by, a man with good songs (sound clip).  Here's what Mike Yates says in his short notes on him: I went to Hawkesbury Upton, Gloucestershire looking for Ernie Payne who sang a version of The Seeds of Love.  Norman Perks was in the bar and, overhearing me ask for Ernie, said that he knew a good song.  I recorded Norman's one song just before Ernie arrived and, sadly, never had time to ask Norman anything about himself, his song, or even whether or not he knew any other songs.

Come on, Mssrs.  Stradling, Burgess and others from the Gloucestershire area, is Norman Perks still around and he does he have any other songs as good as this? 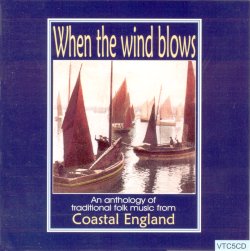 Another singer who voice was resonating in my head long after listening to the album was Ted Quantrill (sound clip).  With his compelling strangled delivery of the song and outrageous melodeon accompaniment, he sounds like a minor league Davy Stewart.

from fairly well-known traditional musicians.  The least known is likely to be Percy Brown who provided some fine functional playing for Dick Hewett's step-dancing (sound clip).

Now that he has moved from cassette to CD production, John Howson has taken on the message that the people who buy these sorts of albums are going to want information on the singers and musicians that they are listening to.  The 16 page booklet accorded to each album allows space for an introduction to each performer and each song as well as a good selection of photographs, mostly in colour, of nearly everyone involved, though a more comprehensive introductory essay would been welcome in each case.

The only negative criticism I could make would admittedly be of a minor, nit-picking nature; the subtitles the albums, "An Anthology of traditional folk music from…" and then "…Rural England" and "…Coastal England" respectively.  It bothers me that John might see a distinction where I feel there is none.  It's nothing really, but if he had used "of" rather than "from", I would have been happier.  After all, there are singers who have been included on both albums, so they are far from being mutually exclusive.  I remember disagreeing strongly with John when, on a BBC Radio 2 programme that he was introducing on Sussex traditional singing when he tried to distinguish a different singing styles from the Downland and Weald areas.  The closer you look at it, the more that you can see that it just ain't so.

Experience seems to suggest that compilations around a theme is the way forward in marketing albums of traditional singing, and these high-quality offerings show that Veteran are up there with the very best.