I've Come to Sing a Song

Another of John Howson's CD versions of earlier releases on cassette, Vic Legg's collection of 'Cornish Family Songs' is a perfect delight. 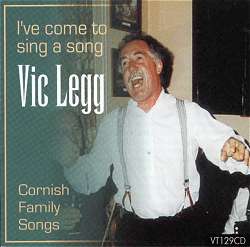 An evening spent with Vic is always a treat, and though this recording is not all live, it could well be - the effect is similarly warm and enjoyable.  This effect is not achieved by personality alone; be in no doubt, Vic Legg is a deceptive and very good singer indeed.  Last year it was my very great pleasure to attend a concert of British Gypsy Music at the Barbican, and Vic opened the proceedings.  I said then that "he really is a national treasure who should be 'treasured' a lot more" with his "self-effacing charm and gorgeous, infectious singing."

Here is a 16 track feast of this lovely man's lovely music, rock steady and honed to perfection over many years of delighting audiences who in so many other circumstances would find Gipsy music inaccessible.  Now that really is a skill; with no hint of dilution or condescension he can sing songs similar to those sung by Phoebe Smith or Caroline Hughes to an audience who are usually so much more comfortable with, say, Pleasant & Delightful.  Listen to Vic's Barbara Allen next to Phoebe Smith's on The Yellow Handkerchief (VT136CD) - not as a comparison of their singing, but maybe more a comparison of the singer's understanding of the audience.  Phoebe has been singing since childhood for her huge 'family', and more contemporary 'outsiders' must - and a lucky few certainly do - make what they can of it.  Vic, living in 'our' world, has been singing for family, workmates, folkclubbers, all his life, and can readily please each and all of them.

Much of Vic's music comes from his west country gipsy mum and aunties - see Vintage cassette Catch Me If You Can (VT119) - and his extended traveller family, though he also has songs from other, non-gipsy, family members, including his Gloucestershire dad, and lots more from his days as an apprentice at the Devonport dockyards.  On the live tracks, Vic says where he learned the songs - the She Crab comes from "my Uncle Bob, who went off to the first world war, ...  and he got the Military Medal in Gallipolli for taking a machine gun post with a pickaxe handle: he was a lunatic.  He got this song in the trenches."  The Molecatcher came from his mother - "very blatant story, I'm afraid ... but she thinks I'm old enough to know about things like this now ... she's 75 and I'm 51."

The songs are precisely the mix you would get from a Vic Legg club evening, in the same order, ending with The Hell-bound Train and doing Me and My Wife as an encore.  Altogether a smashing evening's listening - though I have been listening to it as I drive, and it's a great help with driver frustration - traffic jams, floods, idiots who don't drive fast/slow enough.

There is unfortunately always a caveat with Veteran recordings - the packaging.  The cover photo, taken by Norma Waterson, is of Vic standing on a table in the Bampton Jubilee singing Alouette, with a rather bleary (in all senses) Bernie Cherry in the background.  A delightful and typical picture, but, oh, the paucity of written information is such a disappointment.  With Topic's VotP, Rounder's Lomax (both commercial) and MT (not commercial) as examples, Veteran really has no excuse for producing such an uninformative booklet, so unworthy of the CD it accompanies.