John Cocking is one of those infuriating characters - and we all know one - who turn out to be absolutely brilliant at everything they turn their hand to.  John has made his living as a dry stone waller, but of course takes his skill to championships nationwide, picking up countless trophies and awards.  He shows an interest in golf and is now President of the Halifax and Huddersfield Union of Golf Clubs.  (Will Noble tells me John is not far short of professional standard.  John is far too modest to mention that.)

He grows up in a hunting environment and ends up as kennelman for the Colne Valley Beagles, and it is from a tradition of entertainment at Shepherds' meetings and hunt suppers that John tries his hand at some of the local traditional songs. 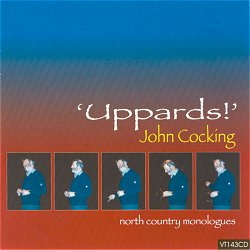 Not content with being an occasional participant though, he joins forces with Will Noble, Barry Bridgewater and Ernest Yates to form the Holme Valley Tradition singing group who knock audiences bandy in the eighties, often sharing the stage with the Copper Family and others.  During this period John throws in the occasional comic monologue, mostly learned from local men Arthur Howard and Ernest Dyson, and a chance remark at Whitby Festival suggest that he should make a CD of them.  What happens?  Well, this CD happens - and is it any good?  Well of course it is, it's bloody brilliant!

Now, I love monologues, and I was delighted that the first release on the Musical Traditions label feature some of Freddy McKay's Billy Bennett inspired work, but even I thought a whole CD might be a bit hard going.  It is not.  John's work is not in the relentlessly absurd style of Bennett, nor particularly from the repertoire of Ernest Dyson, whom John greatly admired.  John has, however, cast his net quite widely over a seventy year span to encompass the works of Marriott Edgar, best known through the recordings of Stanley Holloway, local raconteurs Elsie Houghton and William Beaumont, to the contemporary works of Kevin Collier, and even one time TV favourite, Jake Thackray.  (My one great surprise is that John has not written all the monologues himself!)

Two aspects of the CD greatly enhance proceedings.  Firstly, all the tracks are recorded in front of a live audience, which always aids comic material, and none of the pieces exceed six minutes in length, and both of these features I feel will make it more accessible to a wider audience than might otherwise have been.  I really hope so, because it deserves a very wide audience indeed.  Highlights of course are purely personal, and mine include Runcorn Ferry, one of seven Marriott Edgar/Stanley Holloway pieces, this one nicely demonstrating the Lancastrians' supposed carefulness with money, and from the same source the bleakly enigmatic Uppards, William Beaumont's Widow's Reekin with its superbly evocative description of a bachelor's life before the war and John's unexpected version of the late Jake Thackray's song The Bantam Cock.

But the absolutely stand out tracks are the two relatively recent compositions by Kevin Collier of Otley - Troopers about a third rate ventriloquist, and the hilarious Grandma which is very much in the Monty Python 'but we had it tough' tradition but much, much funnier.  So, an altogether highly successful venture for John.  Heaven knows what's next, and if you are looking for an early Christmas present, you could do a lot worse than Uppards.  It will certainly bring a smile to several faces and by heck, we all needs that these days.