Since this CD is by an Englishman singing English traditional songs and ballads; since it contains The Suffolk Miracle, Higher Germany, Boney's Lamentation, Lord Bateman, Down by the Seaside, Bold Doherty, Locks and Bolts … ; since it has drawings (albeit somewhat difficult to recognise) of Phoebe Smith, Joseph Taylor, Mary Ann Carolan and Pop Maynard on the cover; 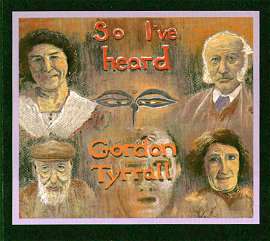 since its title implies an element of oral tradition in the song-learning process; since it's been sent to me for the purpose - then it clearly needs reviewing in these pages.  I wish I could say that the expectations provoked by any of the above had been fulfilled.

This is a traditional record - but the tradition concerned is that of the English folk clubs, rather than that of any traditional community.  That the former has its own validity I would not for a moment dispute - but it is so much divorced from those which normally interest MT readers … and so, regrettably, are most of its products.

Here we find only one of the above songs, Lord Bateman, is allowed to be heard without accompaniment.  This is not to criticise what Gordon does on guitar, flute, whistles - his accompaniments are usually quite sensitive, and in the case of The Suffolk Miracle (Track 1), really rather good.  More to the point, it's constructed in a way which allows him to sing across its superficial rhythmic stress to good effect - much as so many traditional American banjo players manage to do.  It's a pity, however, that this is the only such example on the record - for the rest he's pinned himself down to a steady beat, and the songs limp, or race, accordingly.

No, the problem is that all of these songs are either true ballads, or the very similar story-song types - they require your full and continued attention to work.  Any accompaniment tends to divert you from the story, and instrumental breaks just move you into another frame of reference entirely - it might as well be a different song when he starts singing again.  These criticisms may be slightly less valid in a live performance situation, where your attention is on the singer all the time - but only marginally so.  On record, the use of accompaniments largely invalidates the decision to include such songs in the first place, or it does to me.

I'm tempted to wonder why Gordon Tyrrall sings these songs - his insert notes indicate that they are in his curent repertoire, not just specially learned for the CD.  Since I understand that he is a fairly successful club singer, I must assume that he knows his audience and their requirements.  Presumably they don't mind not being able to follow the stories easily … maybe that's not what they're interested in.  He certainly had a good voice, plays his instruments very well - perhaps that's enough.

I do know that however many times he's 'heard' these singers and/or others like them, he has not learned very much from them about how to present songs like these to advantage - or even, it seems to me, much about what they may actually mean.  Then again - he's getting gigs, and I'm not, so that must tell you something about the club scene, and about both of us.