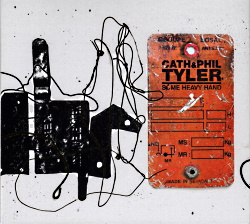 When making an LP, it was commonplace to record more than was required for the ususal 45 minutes duration of that format - and then a selection would be made of what was to included.  Material not included was refered to by the demeaning term of 'overmatter'. So this is a whole CD of 'overmatter' - taken from recordings not used on Cath and Phil's four previous excellent CDs, plus a few tracks of private or home recordings.  I presume this choice was made due to the problems of getting into a studio during the many periods of lockdown over the past eighteen months.

It certainly doesn't sound like 'overmatter' to me!  We start with Palms of Victory, recoded back in 2005 - their first recordimg session anywhere - and you can hear that they knew where they were going, musically, even back then.  Indeed, their music is so subtle and multi-layered that written descripions are quite beyond me - so you'll need to buy the CD (available on Bandcamp) - but a couple of sound clips will whet your appetite.  Here's a great song I've never encountered before, Give Me the Roses, mainly from Phil, but Cath's quietly there in the background.

And for anyone missing Phil's astonishingly vibrant guitar work, which never seems to get in the way of the song, here's a bit of The Water is Wide.  This is a lovely record, with no hint of it being entirely composed of 'overmatter'.