Travellers’ Songs from England and Scotland 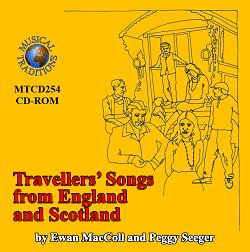 Ewan MacColl’s centenary year has tended to focus on his songwriting, with a CD of those songs recorded by performers from within and beyond the folk scene and a short tour of some of these singers bringing the year to an end.  There is a box set of Ewan’s own singing to come, to be released on Topic Records, and this will perhaps feature his interpretations of traditional songs, drawn from Topic’s back catalogue.

MacColl was, of course, a controversial figure, but one aspect of his work (with Peggy Seeger) that tends to be overlooked is the field recordings they did, particularly among Traveller and Gypsy communities.  These led to two books - Till Doomsday in the Afternoon (1986), which focussed on the Stewart family, and the earlier Travellers’ Songs from England and Scotland (1977).  The latter book has been out of print for many years, so this reprint, albeit on a CD ROM, will be most welcome for those younger singers and enthusiasts who were not around when it was first published.

‘Albeit’ in that last sentence is perhaps not the right word.  It suggests regret.  But the advantage of CD ROM publication is that the recordings that formed the basis of the original book can be embedded into the text, so that one can read the song text and the details about the singer and the song – and listen to the way the singer sang: the all-important style.

The introductory page to the publication illustrates the problem facing compilers of folk song collections who transcribe recordings: ‘MacColl and Seeger presented the songs in the best possible way – they used the most stable tune, in a good singable key, utilising verses from more than one recording when available, and presented in a sensible order.  So, in some cases, the sound file you hear will not exactly match what’s printed on the page.’  It’s a timely reminder to those commentators who criticise folk song book compilers for mediating the songs for publication.

This is a most welcome addition to the serious study of traditional song.