Tripping to the Well 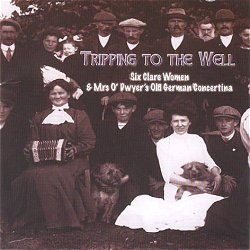 It's not often that one's work on an interesting project results, some years later, in an equally interesting project emerging as an outcome - but this is the case here.  Back in early 2011, Dan Worrall approached me about our collaborating on a 'digital book with embedded sound files' featuring the octave concertina music of the house dance era.  I agreed - based on my experience of working with Keith Chandler on a CD-ROM of his writings on morris dancing, Morris Dancing in the English South Midlands 1660-1900 (MTCD259).  As it turned out, Dan's book was of a very different sort to Keith's, and presented me with new technical challenges ... particularly regarding how to present more than 200 MP3 sound clips.  (A result of this work is reflected in how I now do sound clips in this magazine.)

In January 2012 the House Dance CD-ROM (MTCD251) appeared, and in turn, led to the publication of another 'digital book with embedded sound files' featuring the Somerset collections made by Bob and Jacqueline Patten - A Somerset Scrapbook (MTCD252) in 2013.  You would think that this was quite enough in the way of spin-offs ... but there's more!  County Clare is well-known for its concertina players, and Dan Worrall arranged for the Oidhreacht an Chláir (The Heritage of Clare) organisation to sell copies of the House Dance CD-ROM there, and also set in train a project of which this present CD is an outcome.

In this project, a German concertina that once belonged to Mrs Ella Mae O'Dwyer (1906-1992) of Ardgroom, Co Cork, has been circulated among six prominent women players in Co Clare, in order to recapture its sound in modern recordings.  Each woman had the concertina for one month and, before she passed it to the next musician, recorded a few old tunes on it that came from a source amongst her family or community, thereby linking to the old days of the house dance as well as to the easy-paced playing of older generations.  What a splendid idea!

And the CD is a real delight, not only for the excellent playing, but also for the couple of dozen rarely-heard old tunes, or local versions of tunes, that it contains.  It starts, as is only right, with a track from Ella Mae O'Dwyer herself, playing some polkas, The Ardgroom Set, as once heard in the Ardgroom dance hall, built by her father.  The band consisted of my father playing the accordion and my mother playing the fiddle and concertina.  There were no microphones in those days.  The music consisted mostly of old time waltzes, sets (traditional Irish dancing), barn dances, the Stack of Barley, and two-steps.  I was at the door, at the age of 6, collecting the 4 pences.  When I was 8 years old, I went up on the stage playing the concertina with my mother, and my father went on the door collecting the four pences.

It would not be appropriate for me to comment on each of the tracks, and nor do I have the required knowledge, so I'll just give you a snatch of one or two of my favourite tunes.  Here's Josephine Marsh with The Humours of Cappa, showing her interesting use of the left-hand mimicking the pipes' regulators in the B music.  And what about Jacqueline McCarthy with the interestingly titled Oh! The Britches We Do Wear.

This is a lovely record - - and I'm very pleased to have had some small part in the making of it, even if it's only to give it a good review.  The profits from the CD sales will go to Oidhreacht an Chláir, the Clare Institute for Cultural Studies, Miltown Malbay, for their use in holding future versions of the Concertina Cruinniú, a weekend for concertina enthusiasts that was first held in 2013.