Gimme My Money Back!

In many ways, it makes more sense to think of New Orleans as a northern Caribbean port than as a southern American one.  There has been a long musical interchange between the city and the islands, stretching back to slavery times, when slave owners fleeing the Haitian rebellion brought their human property to Louisiana.  In the thirties, Belasco's Orchestra from Trinidad recorded an irresistible Sally You Not Ashamed? which is the same tune as Ai Ai Ai (Creole Song), cut by the Wooden Joe Nicholas band for American Music in 1949.  More recently, New Orleans R&B was one of the building blocks of ska, delivered to Jamaica by radio, records and visiting artists.  Today the circuit continues to operate, as the Neville Brothers, for instance, incorporate Haitian and reggae elements into their music.  The music of Carlo Jones and his band, of which more later, is yet another example, and a very striking one, of way musical ideas have travelled between opposite ends of the Caribbean, with the intervening islands seemingly used as stepping stones. 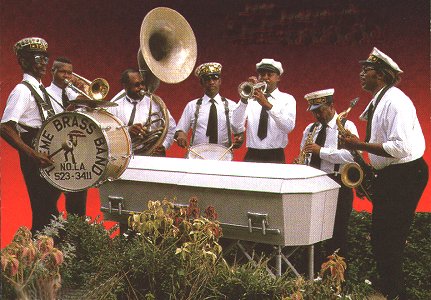 First, however, the Tremé Brass Band (or Tremè, as the artwork annoyingly, and illiterately, refers to them).  This outfit are a hot item in New Orleans - I'm writing this section of the review the day after they won the 1997 Big Easy Entertainment Award for best traditional brass band - and listening to the nine lengthy performances on this CD, it's easy to understand why.  The lineup includes the unbelievable sousaphone of Kirk Joseph, late of the Dirty Dozen, who plays lines which would tax a good string bassist, and young trumpeter Kermit Ruffins, leader of the Rebirth Jazz Band at age 12, and now heading up the Barbeque Swingsters, who were best traditional jazz band in the same award ceremony, incidentally.  (On four numbers, Joseph is replaced by Jeffrey Hills, who is very good, but not in the same virtuosic league.)  Percussion is provided by veterans Lionel Batiste on bass drum and bandleader Benny Jones on snare, between them whipping the music along to a nonstop second line strut.  The melody line also includes James Andrews (second trumpet), Corey Henry (trombone), Fredric Kemp (soprano and alto saxes), and Stackman Callier on tenor sax.  The sax players are both alumni of the Fats Domino band, and their alliance with the younger players, out of the contemporary funk bands, is part of what makes the Tremé such an exciting combination.

I don't intend to suggest that the sax men are stuck in their ways, or that the youngsters have no grounding in tradition.  On the contrary, the latter seem to have mastered everything in the jazz tradition, from the earliest freewheeling heterophony to the newest freewheeling heterophony.  They also have a good grip on everything in between - hear Ruffins and Andrews two-trumpet solo on Chinatown, My Chinatown, pick 'n' mixing stylistic notions from Louis Armstrong, Dizzy Gillespie and Roy Eldridge to add to their own ideas.  Both sax players, but especially Callier (and Roger Lewis, who replaces him on the numbers where Kirk Joseph also sits out) also have a complete grasp of the jazz lexicon, taking in everything from old time New Orleans woodwind sounds to Dexter Gordon, John Coltrane and beyond.  On Back O'Town Blues, Lewis's post-Coltrane solo seems to fly in on a wire like the Fairy Godmother in pantomime, work its magic, and scoot off again.  I'm not implying, by this that the solo is arbitrary or ill-conceived; the Tremé's freewheeling, wide-ranging ethos, which grabs any style or idiom it fancies, accommodates it quite happily.

Lewis's solo is, in fact, about the only reason to listen to Back O' Town, which at 11' 13" is far too long, and too obviously trying in its rowdiness to meet the expectations of the audience at the New Orleans Music Factory, where it was recorded.  (If the expression "Put your hands together!" were made illegal, I would not object.) It also points up the shortcomings of Lionel Batiste's vocal style: his dry delivery, half-way between singing and chanting, seems, here and elsewhere, to be distanced from the lyrics.  As so often with jazz bands, and for some reason especially Crescent City ones, blues is viewed as a structure, rather than as a vehicle for emotional expression, and the same comment applies when Batiste sings gospel.  It may be that he wants to make it clear that when he sings Jesus Is On The Mainline he's doing so as an entertainer, not a worshipper, but the effect is that the sung portions of this number fail as both religion and entertainment.

That said, I should point out that Batiste's singing is fine on the title track because, deriving from Mardi Gras Indian chants, it emphasises rhythm rather than melody.  Along with Food Stamp Blues (usually known as Ain't Got No Foodstamps), Gimme My Money Back comes from the repertoire of the younger bands, but the rest of the set is firmly in the older New Orleans parade band tradition, from the blowsy, swaying Hindustan to standards like Oh Lady Be Good, and the spirituals Just A Closer Walk With Thee and The Old Rugged Cross, which is played at a hard to handle, but very effective, foot-dragging, on-the-way-to-the cemetery tempo.  I'm told that Just A Closer Walk has been established by a Japanese researcher of statistical (and masochistic) bent as the most often recorded of all jazz tunes.  Much-recorded though it is, the Tremé's version breathes new life into the number, among other things by using When The Red Red Robin Comes Bob-bob-bobbing Along as a quote and counter-melody!

Speaking of Japan, on the four live tracks, the band is augmented by two anonymous tourists from the Land of the Rising Sun on banjo and piano.  Since they are unmiked, it's not possible to hear whether their playing matches their chutzpah, but the band seem to have been content to have them along for the ride, and they are not a drawback; as indicated above, I have reservations about the vocals, but that apart this is a very enjoyable CD.

At the other end of the Caribbean, on the northeast coast of South America, are the Guyanas, which, reading from left to right, were formerly British, Dutch and French colonies.  They've always been regarded locally as part of the West Indies, and certainly Guyana, where I lived as a child when it was still British Guiana, fits that cultural and economic bill, from cricket to crops.  Going out there in 1959, the Dutch ship we were on spent three days in Paramaribo, the capital of Surinam, and I still have hazy memories of bone-white Dutch architecture transplanted to the tropics, and much clearer memories of superb ice cream.  Of the music, naturally, I learned nothing, but seeing a CD by Carlo Jones & The Surinam Kaseko Troubadours in Sterns last year, I thought that a lineup of alto saxophone, sousaphone, banjo, trumpet, skraki (a bass drum with cymbals atop), snare drum and trombone was bound to be of interest.  Apart from anything else, the similarity to the New Orleans parade bands was most intriguing.  In the event, kaseko turned out to be my discovery of 1996. 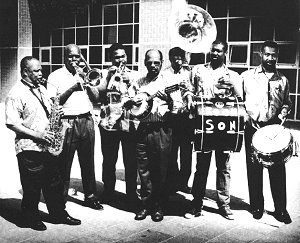 Surinam is a multi-racial society, like Guyana, as a result of the former colonial powers' habit of moving labour around their empires as necessary, and the Indian, Indonesian and Amerindian peoples of Surinam all have their own musical cultures; gamelan, khawali and ghazal are among the styles to be found, along with modern Indian and Javanese pop.  More relevant to this recording, however, is Melville Herskovits' famous observation, with reference to the Bush Negro descendants of runaway slaves, that African culture in the New World is best preserved in Surinam.  Kaseko is very evidently an African-American music, highly polyrhythmic in a manner that's strongly reminsicent of both the New Orleans parade bands and the Mardi Gras Indians, but more complex than either.  Indeed, according to the CD notes, kaseko was considerably influenced by New Orleans jazz in the thirties, so that the lineup similarities may be more than coincidence.  Furthermore, bandleader and saxophonist Carlo Jones refers to his band members as jazzmen, and older people apparently still refer to kaseko as jazz.

Since the thirties, the music has taken on board other influences, seemingly blending in all the new sounds without deleting any of the older ones; during the forties and fifties, Cuban mambo, son and montuño were all the rage, and in the sixties and seventies calypso and Haitian compas were stirred in to the pot.  The resulting music is given an unstoppable drive by the tuba, drums and banjo, over which are laid the polyphonic improvisations of jazz, the sinuously sexy lines of Cuban music, and the big, brassy, call-and-response riffs of soca and compas.  All these ingredients are evidently mixed in with distinctively Surinamese elements, from the drum music of the Bush Negroes to Christian hymnody: the three main genres played by the Troubadours are the medium tempo bigi poku (which refers to the centrality of the bass drum in this style), the slow, solemn groot bazuinkoor - hymns with added rhythm - and winti poku, named after the winti, which are the spirit deities of the Bush Negroes.

All the tunes on the disc are instrumentals, but in view of their titles, and the descriptions given, it seems that they may have - or once have had - lyrics.  Na So Mi Yere So, Sani De Na Uma Koto, for instance, is said to be a set of innuendoes about what lies under women's skirts, while Todo No Habi Wiwiri Ma' Tyari Loso, which means "the frog is hairless but full of lice" effortlessly wins my "surreal title of the year" award.  The official language of Surinam is Dutch, but these tune titles are in a creole of Dutch, English, French, Spanish and Hebrew (!) called taki-taki, which is the day-to-day means of communication among the different ethnic groups.  Sometimes, it's easy enough for an English speaker to understand: Wi De G'we, Wan Dey Unu Sa Miti Baka, the final track, is obviously "we're going away, one day we'll meet again;" it would be harder to deduce, however, that Bigi Emeri Fu Ban Ban Dyari Siton Graman "commemorates Big Emelius with his hydrocele who lived in Bang Bang's yard." 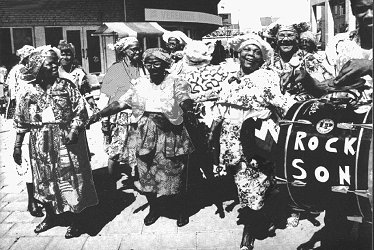 All this discussion - which is assisted by the New Grove, and by the CD's very useful notes - is perhaps peripheral to the main point.  Kaseko is an irresistibly joyful, jumping music; according to Grove, it's played for setdansi - which I'm sure needs no translation - and for "various festive occasions."  On this record, it's delivered by a team of immensely able musicians, both as ensemble players and soloists.  André Jones's sousaphone playing easily stands comparison with Kirk Joseph's, while Carlo Jones brings an unstoppable flow of invention to the alto saxophone; he is, incidentally, a virtuoso of the reed squeak, always doing it at the right time, and never overdoing it.  The brass players seem telepathic in the way they cede the front line to one another, switching instantly from melody to riffing support, and never clashing or competing for the limelight.  If I have discussed kaseko mainly in terms of the influences on it from outside, that's because I know more about them than I do about Surinamese music.  For me, and I suspect for most readers of this review, the joy of discovering kaseko will reside equally in the delightful exuberance of the music, and in that music's evident connectedness to sounds running the length of the Caribbean island chain, from Trinidad to the Crescent City where this review began.