Noi siamo i Tre Re (We are the Three Kings)

Nicely in time for Christmas comes this delightful CD of Christmas 'Star Songs' from Brescia in northern Italy, courtesy of the publishing arm of Milanese folk group Barabàn - and available through Felmay's usual distribution channels.  As its number indicates, this is AcB's eleventh production - five of which have been of traditional performers and rituals, including the wonderful CD of the Ponte Caffaro carnevale (Mardi Gras) dance tradition, reviewed and covered in two articles in these pages. 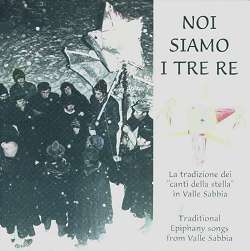 Any reader who has enjoyed Doc Rowe's or Ian Russell's recordings of the carolling traditions in the South West or North of England is sure to love this record - as is almost any other reader, I would hope.

The songs and performances, all recorded between 1995 and '98, come from the Sabbio Valley area of Lombardy/Trentino - basically the network of valleys which drain into the river Chiese, just west of Lago di Garda.  This is an area which, through missed opportunities, never developed a strong political identity and "as it happens sometimes, after the failure of politics, economy and social life - when only culture is left -

it is culture itself which reveals the identity of a land", to quote the typically excellent booklet notes.  Canti della stella (Star Songs) are those songs associated with a Christmastide begging ritual (sound clip - O dolce o felice notte - Cantori della stella di Collio) rather similar to British one of singing Carols round the houses.  This is a custom widespread throughout Italy (extending into the German areas in the northeast, and even as far as Sicily and Sardinia), and known as la Stella, Chiarastella, i Tre Re, Pasquella or Belfanate according to the region. 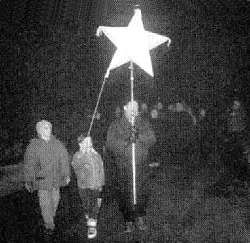 But those found in Valle Sabbia have a kinship with each other, and the carollers are always accompanied by an illuminated star symbol - carried on a pole or mounted on a wagon, lorry, van or car, according to location and era.  They sing at crossroads, squares, courtyards or other public places, as there is rarely time to sing at all the individual houses in a village.

Some of the songs are quite short (three 3-line verses being the briefest here), while others are very long (thirteen 6-line verses being the longest).  Typically the story comprises an introduction, the search for a bed, the stable, a description of the night, of the Three Kings' journey, the prediction of Jesus' crucifixion, and good wishes to the audience.  Almost all the songs have common elements and the longer ones include borrowings from other seasonal themes - and most texts can be traced back to two 'Spiritual Lauds' printed in 1563 and 1579.  But from around the end of the 19th century this has been an exclusively aural tradition and, needless to say, few of the singers are aware of the antiquity or historical origin of the song they perform each year - most presume that it is just "local to this valley".

Despite the fact that only four distinct songs are featured in the 12 tracks (there are 8 different versions of Noi siamo i Tre Re [here's a sound clip of one from Lavenone]), the texts, melodies and particularly performance styles

are so varied that the entire CD is a very engaging listen throughout.  The various village choirs vary from men-only unaccompanied ensembles, through several types of mixed - gender and age - voices (sound clip from Crone), to groups accompanied by fiddles, accordeons, guitars, brass, bagpipes, bassetti

and other instruments, with the singing ranging from unison to several differing harmonic approaches (sound clip from Treviso Bresciano).  Just what you'd expect from a living aural tradition, in fact.

I can't think of many (any?) other bands who use their own record label not just as an outlet for their own commercial product, but also to support and make known to a wider world the traditions from which so much of their music is drawn.  Long may they continue to do so with well-produced, superbly researched and enjoyable releases such as this.