Travellers and fellow Travellers
Keepers of the flame 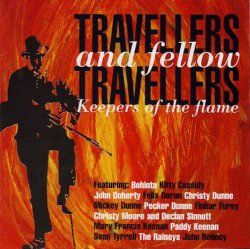 A good CD for a good cause.  This has been published by the Pavee Point Travellers Centre in Dublin, as part of their 20th anniversary celebrations.  Their Director, Ronnie Fay, writes that he hopes that 'Through collections such as this, we hope to challenge some of that [previously referred to] prejudice and bring to a wider audience a flavour of what represents a proud and ongoing tradition.'

Amen to all that - and in the light of which it's easy to forgive the presence of a few well-known non-Traveller names like Christy Moore and Sean Tyrrell who, along with Finbar Furey, Paddy Keenan and Bohinta, should make for some good sales figures for this record, and funds to continue their good work.

However, I would suspect that most MT readers will find some of the older and less well-known recordings to be of far more interest.  To begin near the beginning, track 2 is the great Felix Doran playing his famous party-piece, The Fox Chase, from off the old Topic LP.  Having shared the same watering holes with Mr Doran in the late '60s, this sounds a little less amazing than it did then - but younger listeners can prepare themselves for a treat.  But absolutely everyone is in for a treat with track 3 - Kitty Cassidy, recorded back in 1967.  Some of her songs can be heard on the previous Pavee Point CD Whisht.

This is true Irish Traveller singing, and as transfixing as anything in the genre.  Here she sings what is referred to on the CD's cover as Green Grow the Rushes, but in the notes as Green Grow the Laurels (sound clip) - although they go on to say that it's mainly a collection of floating verses that are common to many songs.  While this is certainly true, a song using most of these verses - and to the same glorious tune - was recorded from the superb Lal Smith in Belfast in 1952, under the title of Castle Dolliford.  Kitty Cassidy is as good a singer, and probably more accessible than Lal, and for anyone who's not heard that, I would recommend this CD on the strength of this track alone.

Happily, I don't need to, since there are plenty of other gems to be found here.  From the late-1950s come recordings of the Rainey Brothers from Connemara - two fiddles with a bit of bodhrán backing - nice, rough, old fashioned dance music, and previously unreleased.  Johnny Doherty plays An Chúilfhionn at a very brisk pace, together with The Flogging Reel, while his relative, John Rooney has what I feel is a bit of a thrash at Craig's Pipes - but it's fine if you're in the mood.

A real favourite of mine is the set Strike the Gay Harp/Jimmy Ward's/Doberman's Wallet,

said to be by piper Mickey Dunne, although he's actually joined here by his daughters Brid and Niamh.  This is wonderfully powerful playing, and the fiddles are to die for. (sound clip, left)  Equally good and equally new to me is Mary Frances Keenan, from Ennis, who - despite this being a modern recording - sings very much in the older Traveller style, and delivers a very effective version of The Home I left Behind. (sound clip, right)

Aside from the Green Grow the Rushes / Laurels mix-up, I was saddened to note that Darby Smith's Will There Be Any Travellers in Heaven? has become Are There Any Travellers ... and that no mention of his authorship is made in the booklet notes or in Sean Tyrrell's comments on the song.  He does admit to having learned it in England, and having 'then reworked [it] to suit Ireland'.  This reworking seems to amount to merely changing about three words - and utterly ruining Jimmie Rodgers' wonderful tune!  So it goes.

Sticking with the big names, I was glad to hear that Paddy Keenan did not commit, in his rendering of The Steampacket/Miss McLeod's, any of the enormities which Finbar Furey has seen fit to lavish upon Anach Cuain - one of my favourite slow airs.  But I will say no more ...

I truly hope that these big names will help to sell tons of these CDs, and swell the coffers of the Pavee Point Travellers Centre.  For those of you not much swayed by such things, there are not many of them, and the rest of what's on offer here will be well worth your investment of a paltry €20 from: www.paveepoint.ie

PS: before anyone complains - the comparative lack of sina fada accents follows the booklet/packaging, and is not my doing!