Reachin' for the High High Lands

Pete Heywood has done some sterling work in the last ten years with his Living Tradition magazine.  Now, there is something about these people who edit folk/traditional music magazines; they end up wanting to be record label bosses as well.  Pete has now gone down this road.  But, what's this?  The Tradition Bearers Series.  Can I hear alarm bells ringing?  Can I see eyebrows being raised?  We better hear Pete put the case for the defence by allowing him his introduction to the series in full.

During the period that is often referred to as 'the folk revival', there was a tendency to put singers into one of two categories - source singers or revival singers.  This was a useful distinction at the time but gave the impression that a revival singer was of less importance to the ongoing tradition.  Without new singers the tradition would clearly die and revival singers of any era become the source singers for the next generation.  The term 'tradition bearers' is perhaps a better description of a relatively small group of singers who are genuinely carrying on a tradition.  Singing in a traditional style does not mean a slavish copy or a lack of personal input or innovation but comes from those who have immersed themselves in a tradition and have the skills to carry it forward.

Who currently is, or is not, a genuine tradition bearer is a subjective judgment.  Recognition of a person as a tradition bearer is perhaps best done by their peers.  In this series, the intention is to include people who have earned the respect of their fellow singers.  We hope that these recordings may act as some kind of benchmark, or pool of repertoire and style, in the long thread of the tradition.

Well, I'm afraid that this, almost inevitably, raises more questions than it answers.  Anybody who has been following the widespread discussion on this site that followed the release of the Voice of the People albums particularly the insightful interview with Tony Engle and Reg Hall will have read that this would not be good enough for Reg Hall; Bob Blair and Jimmy Hutchison would not qualify as traditional singers - their voices are not "of the people".  Following the way that Reg would argue, it is not difficult to see the flaws in Pete's statements.  Long immersion in traditional singing does not make one a traditional singer.  It takes more than recognition by one's peers to become a traditional singer, but there is truth there as well for revival singers and particularly their recordings have inspired younger singers to learn songs.

What is and what is not the tradition will probably never be satisfactorily answered.  We could pursue the minutiae of the arguments, but that way lies obsession and eventually madness, and we still would not be any further forward.  My opinion, for what it is worth is that in this case Bob Blair and Jimmy Hutchison are not traditional singers, nor tradition bearers in the sense that I would use the words, but that their love and understanding of the tradition, 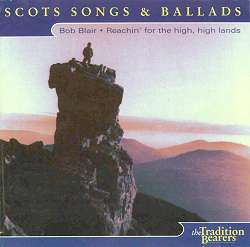 their commitment to it over most of their lives and their talent makes their albums well worthy of consideration in these pages.  In any case, MT sent me these two some while ago so I'd better stop navel-gazing and get on with it.

Bob has been singing traditional songs and involved in folk clubs for most of his adult life.  Quite a number of years were spent in England in Grimsby and London where a fundamental influence on his singing took place when he became a member of Ewan MacColl's Critics Group.  At this distance in time, it is difficult to credit just how controversial and divisive feelings were about the influence of the Critics Group were in those few years either side of 1970.  I can remember being envious of the incredible technical advances that singers made under the dominating influence of MacColl and at the same time horrified at just how overpowering this orthodoxy became.  Sandra Kerr would be an example of a singer who benefited from the experience and moved on to become her own person.  Bob would be an example of a singer for whom this has had a lingering impact; and we can still hear His Master's Voice in his singing.  A hard quality studio sound, the sort favoured by MacColl serves to emphasise this, but there's no doubt that he is technically, a very accomplished singer.

The main interest in this album centres on Bob's enthusiasm for Scots traditional songs and the way that this shines through every track and the fact that he has been able to record some very fine and much neglected material.  One of the outstanding tracks is a fine ballad, Bonny Peggy, for which he gives MacColl as a source, also saying that "Child gives Kinloch's only, for which Bronson found no tune."  This begs the question, '"Where does this magnificent tune come from?"

Another intriguing and convincing performance is of the three verses of O Gin My Love Were a Pickle o' Wheat.  from the David Herd manuscripts.  The slow relaxed pace of these two pieces and the likes of The Collier Laddie see him at his best.  He is less convincing when the pace is faster and more rhythmic, snatching at notes in Johnny Lad.  Accompaniments are used sparingly.  He only uses his English concertina playing the sort of standard chords-and-a-bit-of-the-tune accompaniment on one song.  This is another interesting and neglected ballad Cairn o' Mount which he sings to a modern tune by Tony Cuffe.  The only other accompaniment is on John Sinclair's version of The Grey Silkie of Sule Skerry, where Finlay Allison's fiddle is given bags of echo/reverb, which sounds a bit strange against the voice that seems to be recorded more or less straight.  The album ends with its one recent song, Jack Foley's The Bonnie Lassie o' the Mornin' which he rightly describes as "one of Scotland's finest modern love songs."

To these ears Jimmy Hutchison's voice is one that is full of interest.  He uses decorations in a very subtle and understated manner.  The tone quality is always rounded and very pleasing and seems to convey that relaxed, unhurried, laid-back quality that also exemplifies Jimmy's life style. 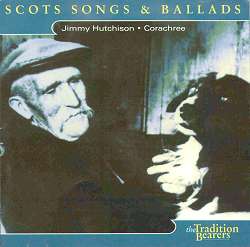 He is the sort of singer that has a mighty impact the first time you hear him.  In my case it was at a session at the Victoria at the start of the 1969 Blairgowrie Traditional Music Festival.  My enduring memory of his performance that evening of Tattie Jock and Mutton Peggy gave me the sort of feeling that can only be expressed by words like 'exceptional'.  I was not the only one who thought so for this weekend saw him winning the very first traditional singing competition organised by the Traditional Music Association of Scotland.  (I was only third that day but the ensuing thirty years have been long enough for me to get over the disappointment and give Jimmy a fair review!)

Another regular at The Singers' Club in the mid-sixties when he lived in London, there is no trace of that dominating MacColl influence in his singing though some songs here were learned at that time; False Lover Won Back from Ewan and Spanish Lady from Dominic Behan.  The main source of the songs that he sings here is Jeannie Robertson with four ultimately coming from her.  He claims in the notes that he learned The Overgate from Belle Stewart, but surely the version heard here also comes from Jeannie? This album shows that Jimmy's style and approach to singing has changed little in 35 years.  It was surprising to read in Owen Hand's booklet notes that "his voice is no longer as pure as it once was."  I listened carefully to see if I could hear what he was on about, but on items like Erin-go-Bragh it still sounds pretty good to me.  You can hear a couple of very slight fluffs on his very individual treatment of Jeannie's Matty Groves but everywhere else he seems to be hitting each note fairly and squarely.  In fact, I think that I can remember him straying very slightly off key occasionally in those earlier times, but there is nothing of that here.  His most requested item at those early TMSA Festivals must have been I'll Lay Ye Doon and this is included here.  It is a song that would highlight any weaknesses in a voice, but he comes through it with honours.

Like Bob, he uses accompaniments very sparingly.  Brian Miller's guitar is on False Lover Won Back, very effective mouth-organ is well to the background in D-Day Dodgers, but most pleasing of all is Tam Speirs' fiddle, full of double-stopping and droning notes on The Beggarman.  Jimmy was born in South Uist and is a native Gaelic speaker, but only includes one Gaelic song on the album and is amongst the best tracks on a very pleasing album.

Leaving the Traditional/Revival status aside for a moment, recordings of traditional song that show the level of commitment, sympathy and talent shown on these two albums are rare enough and only the really hard-core purist is going to find them unattractive.