Turn me bike round - (CD and A5 booklet) 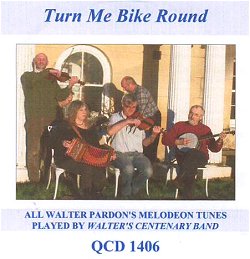 The name of Walter Pardon will be familiar to many readers as one of the important traditional singers whom Norfolk produced during the 20th century.  As Chris Holderness has shown in an article in MT he was also a lifelong musician, initially on the fiddle but soon and primarily on the melodeon.  Although he was very much a fireside - or in his case 'foot-of-the-stair' - musician, whose melodeon seldom if ever left the home - the recordings made by his nephew Roger Dixon (some of which can be heard at the MT article) show that his style was lodged fairly and squarely in the North Norfolk tradition, as was his repertoire, and indeed the compass of his repertoire.

To coincide with a celebration of the centenary of Walter Pardon's birth which was held in his native Knapton in March this year, Alan Helsdon - who was responsible for the fascinating Hawk and Harnser collection of traditional dance music from Norfolk also published by Quanting, 2nd ed., 2005, - produced a booklet containing not only notations of all the tunes which were recorded from Walter Pardon, but also a reprint of Chris Holderness's MT article which, identifies Walter's uncles Billy (fiddle) and Walter (melodeon) Gee and a large collection of 78s among his sources.

But, as the editor once had to remind me, not everyone can read music and Alan and Chris were also part of a self-confessed scratch band which was put together for the occasion, with an equally scratchy name - Walter's Centenary Band - to perform Walter Pardon's and a few other local tunes.  The booklet is accompanied by a CD of the band playing those tunes and the result is a sheer delight.  From the first track - here they are playing Walter Pardon's version of the ubiquitous Yarmouth Hornpipe, which he played swung as was generally the way with hornpipes in Norfolk (whatever the tempo) - the music is suffused with the exuberance which was once the hallmark of traditional dance music throughout the British Isles, despite the fact that - or perhaps because - it was often played by people who lived the hardest of lives.

Although the instruments - melodeon, 3 fiddles (a ratio I would recommend!), dulcimer, piano and banjo - are all associated to one degree or another with older musicians in East Anglia, the combination - as far as I know- exceeds any which was recorded playing together in Norfolk in the old days.  But the six musicians - despite the ad hoc genesis of the ensemble - play with such a unity of purpose that its size and make-up scarcely matter.

Some of the tracks feature different combinations of the individual members of the band, but it is the tracks which feature the full (sometimes almost) full band which are particularly effective, effortlessly capturing as they do the exuberance I have referred to.  But no mere re-enactors they - when they are in full frontal flow playing one of Walter's solo melodeon tunes they seem somehow to recapture something of the uplifting joyousness of the solo musicians and bands recording on 78 rpm which were among his sources. And as their predecessors sometimes did, Walter's Centenary Band even manages to turn a song-tune into a waltz of aching attractiveness, as in the case of The Yellow Handkerchief - coupled here with an intriguing Frost is all over played as a waltz, in the manner of Walter Pardon.  And who would have thought there was room in the world for another recording of Redwing, Old Joe, or Cock of the North (the latter in a lively set with the Oyster Girl and Haste to the Wedding)?

If it's the vapidity of note-perfect virtuosity or calibrated production values you want you must obviously look elsewhere, but as an unforced (I hesitate to say sensitive because that would suggest a counter-productive degree of deliberation) and honest celebration of the spirit of the music you won't regret giving Turn me bike round (you must see the CD notes for an explanation) a listen.

Turn me bike round - booklet and CD - can be obtained for the sum of £10.00 from Quanting Publications: alan@quanting.co.uk