Yellow Handkerchief; No My Love, Not I; Bonny Labouring Boy; The Spotted Cow; Once I Courted a Damsel; Princess Royal, Bampton; Rosemary Lane; Pleasant Month of May; Ophelia's Song; The Bold Grenadier; Church Street/St Mary's polkas; Once I Had a True Love; Banks of Sweet Primroses; The Sweet Nightingale. 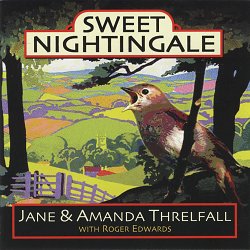 This is not the sort of CD I would usually review in these pages but, as it arrived together with a hand-written request for a review from Amanda, I am not one to reject a maiden's plea.

I would not have reviewed it because it seems to me so four-square a revivalist offering but, as parts of Roger Edwards' notes indicate, the performers see themselves as faithfully developing their work from traditional sources.  I think that understanding a performance depends to a great part in knowing how the performer feels about the song.  Often, this can be accomplished through the simple expedient of actually listening carefully to the singer, but with revivalists - particularly those who hope to appeal to a paying audience - this is far more difficult, since they need to create an aural artefact which will be acceptable to their audience ... rather than just letting the song tell its story, and reveal the singer's emotions.  Here, the stories and the emotions are somewhat hidden behind this 'sound curtain' - so we need to look at the notes for clarification.

When considering the present day interpretation of English traditional songs, there should be a natural instinct to preserve as much of their original context as possible, including their fundamental, vernacular character.  At the same time, a realistic acceptance of their ongoing metamorphosis, albeit a very slow process, as both legitimate and inevitable, offers arguably the healthiest environment in which these songs might continue to develop, retain relevance and ultimately survive.

Many had started life in other forms, in ballad operas, as medieval songs, as published broadsides, and their collected variants reflect their then point of progress down through history.  But one captured moment on a continuum can't then be viewed as a finite point beyond which all natural development ceases.

It's important to us that the integrity of these songs remains intact through our interpretations and they continue to reflect the cultural values of that essential England.

That, after all, is why we find them so attractive and why they re such a strong and stimulating influence.

Now few people, myself included, would find much to disagree with there.  Moreover, I would argue that many traditional singers learning one of these songs would have 'developed' it within these criteria without even thinking about it - and a few would have done so with a good deal of thought!  But almost all of them would have learned the song from another traditional singer - which the Threlfalls have not.  The notes indicate just three traditional sources - and these records they listened to were but 'one captured moment on a continuum' to which the Threlfalls have no access.  The remainder are taken from books or other revivalists.  It's good that they believe it important that 'the integrity of these songs remains intact through our interpretations and they continue to reflect the cultural values of that essential England.'  It would be even better if the results matched their aspirations.

Because what we have here is a collection of extremely well-known songs out of the revival, and they are very well sung and played.  But each is exactly the 'aural artefact' I mentioned earlier ... a piece of sound to be enjoyed as exactly that.  That is the 'interpretation' and 'development' the notes speak of - and I fear that it has little or nothing to do with the 'integrity of these songs' in terms of the oral traditions of English song; rather a translation into an entirely other tradition - that of the revival.

There's scarcely a song here which doesn't suffer by being constrained by a rhythmic instrumental backing - not an 'ongoing metamorphosis, albeit a very slow process, as both legitimate and inevitable', but an abrupt, foreign and damaging realignment.  Even in the Coppers' Pleasant Month of May, the rhythmic changes in the middle of the verses have none of the fluidity the old countrymen managed with such grace and ease.  To have the aspirations outlined in the notes is admirable; to fail to see that their methods negate all such possibilities seems incredibly naďve.

In a way, the CD - without the aspirations stated in the notes - would have been a more acceptable package ... with them, one is drawn towards any anomaly.  On track 6, Roger Edwards plays Princess Royal perfectly well.  But in noting that it's a Bampton double jig tune, that it comes 'with permission', and stating that he once played for Francis and Roy Shergold's dancing, he forces me to comment that neither the Shergolds, nor any other pair of Bampton dancers (nor any other morris jig dancers I can imagine) would be able to dance to Princess Royal played in this way.  It has become just a tune, completely bereft of any of the timing nuances needed to allow the Princess Royal double jig to be danced to it.  Roger also ascribes the song, The Yellow Handkerchief, to a Phoebe Smith recording by Mike Yates, as found on the 1998 Veteran CD of the same name.  Given the nature of the 'interpretation' and 'development' of this song to be heard on track 1, one might doubt that they had ever heard Phoebe singing it at all.  Further, although Mike Yates recorded 24 songs from her, he never recorded The Yellow Handkerchief - that was Paul Carter.

To make the claims and aims indicated in the notes to this CD, one needs to be sure that the recorded results match up ... here, they don't.  And, oddly, the rather nice graphics provided on the cover, CD and notes booklet aren't credited to any artist, and the group's website - www.triothrelfall.net - doesn't exist either.

A month later - it does now exist.