Now that Direct Distribution have us on their New Releases mailing list, I shall have to be a bit more circumspect about what I ask for ... something from Rounder purporting to be Old-Time turned out to be far from it - 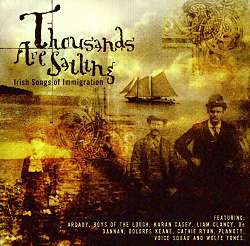 and now I've got this Shanachie one to deal with.

It claims to be "A collection of classic Irish immigration songs by many of the finest traditional artists of the past 25 years".  I was imagining some Pennsylvanian coal miners singing about 'Paddies coming over here and stealing all our jobs' ... but it seems that the people at Shanachie are not aware that the word to describe the subject of these songs is emigration.

But, hey! let's not be picky about these things an have a look at what's on offer here.  Ah ... another word they seem to have some difficulty with is - you've guessed it - 'traditional'.  Now I'm not one of those who insists that their trad performers should have been in their graves since WW2, and I'm quite prepared to make allowances for the changes in modern societies and the ways in which these will effect singers and musicians.  But The Wolfe Tones?  Karan Casey?  I think not.  However, there are enough here who inhabit the debatable lands for me to at least give it a listen ... and so I do.

I'm beginning to wonder if all that listening to the 500 tacks of Voice of the People hasn't changed me for ever.  It's certainly changed my subsequent listening habits - and I think it's changed the things I find essential in a song or piece of music, too.  At the end of the first time through this CD, I was pretty sure that almost none of them were present - except for track 6, where Dolly Keane fairly jumps out of the speakers with a bit of energy, verve ...life!  Booklet inspection reveals that this De Dannan Rambling Irishman is from around 1974 - and it would appear that Irish revivalists in those days remembered something of where these songs came from and the style in which they used to be sung.  I'd not noticed the way revivalist performers have changed in recent years - how far they've moved away from their roots.

This is not a CD I want to review, but I'm going to because it exemplifies so much that is wrong with the way traditional music is being sung - and approached - these days.  Shanachie thinks these performers are traditional because their songs are - I know they're not because their style isn't.  I though that I'd not heard much trad/revival music over the past few years because my interests had moved more into dance music ... I now think the truth of the matter is that I've never heard any of it which demanded my attention!  That one song of Dolly's aside, there's nothing here which says "Listen to me, I've got something to tell you!"

And that's what it's about, for me.  I love to hear the 'real' trad singers like those on VotP and I love to hear revivalists like Kevin Mitchell or Ray Fisher or Anne Briggs or the Waterson family, or dozens of others who have listened and learned from the old people - and realised that there's no need to change everything to communicate to today's audiences.  The style contains all the mechanisms needed to express anything and everything a person of the 1990s is capable of feeling, and to make the communication of those feelings effective - and the song relevant.

Tony Engle and I were talking recently about the relatively different levels of acceptance for trad music in England and America, when he let slip the following gem of wisdom: "The big difference there is that most American traditional music had a rhythm section".  And, do you know, I'd never noticed that!  It's perfectly true - but I was listening to the song ... and the Americans had been doing accompaniment for long enough to have found a way of not getting in the way of the song - some of them, anyway.  But the Irish revivalists on this CD haven't yet got that knack ... they've learned that to achieve a wide popularity they need accompaniment - but not how to avoid obscuring the song.

Which is all a terrible pity, because there are some absolutely splendid songs on this CD, some beautiful singers and wonderfully skilled musicians - but most of it just goes past me like elevator music.  I can even type this whilst it's playing - and I ought not to be able to!  This is my version of Mairi MacArthur's 'Sundays Test' (see Enthusiasm No 8).

Track 1 is a perfect example - Karan Casey sings the Shamrock Shore.  This is such a beautiful, long, sinuous tune, the words are terribly moving, and Karan has a lovely soaring voice with which she can sing well.  But the whole thing is nailed firmly to its coffin by a leaden synth and strings accompaniment which is exasperating in its rigidity - and tastefulness.  There is not the smallest element of rhythmic, dynamic, melodic, decorative or emotional freedom in the whole performance - each verse, each line, is no different from the next.  Having heard it, I have not the slightest idea of what it's about or how she feels about it - I only know that it is beautiful ... and intensely irritating.  Even a very average singer, asked to sing this song without accompaniment, could not have failed to do a better job - and Karan is a very good singer.  This is a terrible thing to do to such a superb song.

My Ship is Ready fares rather better in the hands of the Boys of the Lough - as indeed it should - and I was gripped by Cathal McConnell's singing of the first verse.  This is sung quite freely with only a sparse chordal piano in the background, leaving room for the singer to move and breathe.  It gets more insistent in the second verse and a harmony fiddle enters, joined by a cello (?) in the third - the ensemble playing now making it more difficult to concentrate on Cathal's lovely singing.  The backing gets louder and the tempo has now solidified, perhaps preparing us for a dynamic break in the final verse - a drop to the solo, unaccompanied voice in free rhythm would have been very effective.  But no!  The band hits the first note with a minor chord and the entire last verse moves into the minor key, for Christ's sake!  An absolute bloody travesty!

There are so many superb songs here, and so many ignoble things done to them - Shamrock Shore, Thousands are Sailing, Paddy's Green Shamrock Shore, My Ship is Ready, Welcoming Paddy Home, Green Fields of Canada, My Own Dear Galway Bay .....  I wonder if Shanachie is not unconsciously aware of this, since they seem to have rewritten history in their booklet notes - perhaps to protect the innocent.  The Leaving of Liverpool has become Fare Thee Well, My Ship is Ready is now Farewell and Remember Me, while the Green Fields have moved from Canada to America.  Even the performers are not safe: the lead singer with the Voice Squad has become Phil Gallery and those of Planxty's two songs, named in the notes as Christy Moore and Johnny Moynihan, are both actually Andy Irvine.

Shanachie obviously don't care too much about what they put out labeled "classic songs" or "the finest traditional artists" - so it's probably ridiculous of me to say that I do.  But I do!