Music of the Tatra Mountains

Music of the Tatra Mountains

The Tatra mountains were, until the beginning of last century, both the most isolated part of Poland and one of the most utterly Polish - that is, unlike large parts of the country, having no German or other 'foreign' influence.  (Compare, for instance, Silesia, where music and culture were highly Germanised)  The Gorale people who inhabited the Tatras remained distinct from the Polish lowland population, and appear to have evaded most attempts to impose order externally.  They also seem to have kept their music, which to my ears is much more reminiscent of Slovak or Hungarian music than of other Polish traditional music I've heard.

Things have changed since the 'discovery' of the Tatras by the artists of the Young Poland movement in the early twentieth century. 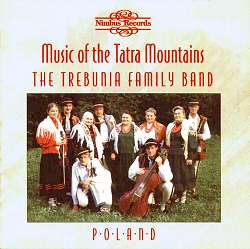 Zakopane is now the main Polish holiday resort (as well as the site of an incredible flea market for Ukrainian and Russian traders - at least it was, in 1996).  Even so, the music seems to survive in a state of rough vigour to judge by these two recordings.

It helps that both have been recorded as live sessions rather than as studio performances, though having put together a session at the local theatre specifically to make the recording is a compromise compared to true field recording authenticity.  (Whether 'true' authenticity is available at all these days is another matter)  Booze, the fuel of many good folk musicians, may well have played its part here.

The texture of the music is quite similar to that of Hungarian music; the basic ensemble is strings, with prym bearing the melody and two sekunds accompanying, often polyphonically, over a rhythmic string bass.  The only other instruments appearing are simple flutes or whistles (billed as flutes, but sound more like whistles to me), and only on the Trebunia record).  Chromatically rising bass lines are much in evidence and together with harmonic ostinato - repeated short figures - give the music its particular character.  The peculiar flavour of Tatra music, though, comes from the 'warped' (to western ears) scale with its flattened seventh and and sharp fourth.

Both bands are pretty self-aware; for instance, the Trebunia band has made the intriguing experiment of a reggae-Podhale mix with Norman 'Twinkle' Grant (if anyone has this, I'd be glad to hear it!).  I find the Trebunia CD a little easier on the ear but also just a bit more tame than the Wilczek band's recording, in which the violins squeal away with wild, improvisational abandon leaving the bass earthbound and plodding.

Nimbus has made a half-good job of the notes.  There's some reasonable but perhaps slightly romanticised detail on the history of the region and the Gorale, 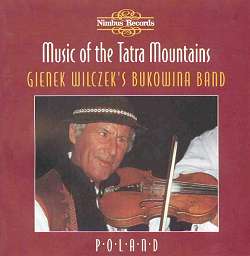 together with solid description of the characteristics of the music including notated scales, ostinato bass lines for a couple of dances, and ornamentation.  Much of the background is copied in both recordings though the text is varied to reflect the context.

However, there are no notes on specific tracks.  That makes it difficult to relate the somewhat theoretical and taxonomic approach of the notes to the actual music that is being heard.  Since one particularly interesting aspect of the notes is the division of Podhale musical traditions into 'core' repertory, other 'Gorale' music, and 'adopted' tunes from Hungary, Slovakia, Spisz or Orawa, it would have been interesting to have notes on how these different tunes can be distinguished from the 'core' repertory and what their characteristics are.

I would also love to know how the Wilczek band came across their piece de resistance - a truly weird performance of Oh Susannah! (sound clip - the last bit of the Brigands' Dance and into Oh Susannah)  There's also no reference to formats of Podhale music other than the string band - except for the mention of Wladyslaw Trebunia's grandfather as 'the famous bagpiper who played for Szymanowski'.  So what happened to the Podhale bagpipe?

Another bugbear is the lack of translations or even synopses of the lyrics.  One rather soulful track is simply headed ballad Krywaniu (sound clip) - indeed 'Krywaniu' is the refrain, but we aren't given any idea what this means.  Is it a person's name, a town ('Ay de mi Granada!'), or even the Polish equivalent of 'Hey nonny no'?  It reminds me slightly of those marvellously helpful menus that contain English translations such as 'carp Krakow style' and 'Slovakian special cheese' (the second means 'fried', basically, but I never did find out what the first one was, and it might have been trout anyway).

Quibbles apart, these are enjoyable records.  If the laughter at the end of Oh Susanna is anything to go by, the musicians enjoyed making them too.