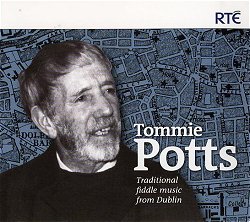 This CD has been issued as a further chapter in the occasional series of recordings from the RT… sound archive.  Fiddle player Tommie Potts is one of the enigmas of Irish traditional music.  A creative genius who grew up in a famously musical household, by the time these recordings were made he was re-writing every tune he played, every time he played it, putting radical melodic and tempo variations into the simple eight bar structure of Irish traditional music.  His command of the instrument and the ornamentation required to drive Irish music was immense.  His rolls and tight triplets would be the envy of any musician and the tone he produced from the fiddle was testimony to his status as a solo player.  What we hear is Tommie at his creative and contemplative best.

This CD presents 74 minutes of Tommie playing on his own with a few snatches of speech, all taken from three sources.  The music includes 1962 recordings made by Tommie for Peter O'Loughlin from Co.  Clare, recordings made in the 70s by Tony McMahon for radio,and tapes from the early 80s from the Potts family.  In between these various home recordings Tommie had recorded The Liffey Banks LP for Claddagh records.

To some, his music stands as a justification for all sorts of modern jazz and rock influences in Irish musical performance.  For others his creativity is something unique, something to be savoured and cherished as one man's passion and desire for expression which found an outlet in an apparently humble collection of simple melodies.  Potts was an extremely sensitive and private man and as he says himself in one of the few short spoken sections on this CD he saw a lot of sadness and reflected that in his music and especially in his preference for tunes in minor keys and D minor in particular.  Like the East Galway fiddlers, Paddy Kelly and Paddy Fahy, Potts switches the whole feel of a tune by dropping it into a minor or modal shape, flattening thirds and sixths, but he goes beyond that and takes liberties with both tempo and structure to create his own vision of the parts of the tune that seem to have caught his imagination.  As illustration, the CD ends with a brilliant treatment of The Fermoy Lasses, where shifts into the minor key characterise the melancholy feel of the first part, before introducing a brightening of key for the second part; Potts then throws a wild selection of tasteful melodic twists into his second time through the tune, before ending all too soon on a last review of the first part.  Famously he dropped the first note of the second part of the title tune from the Liffey Banks on his LP catching the listener off guard and he does the same to tunes on this CD.  Additionally he adds or removes bars from parts, so that he turns the first part of Ballinasloe Fair into a four bar motif while he adds four bars to the Steampacket.  This is not music for dancing and in truth it demands close attention from the listener.  People with a fairly good knowledge of the tunes will have an even greater appreciation of the magic in Tommie's music.

His variation sometimes took him into writing a whole new tune.  His adaption of different parts to form the slip jig The Butterfly is nowadays well known and played at sessions around the world.  Track 23, presents a wonderful un-named slip jig that Potts composed and that stands among the highlights of this CD.  Of equal fascination to the music devotee is the remarkable way that his settings and variations in some tunes have found their way into the standard repertoire.  His playing of Julia Delaney is radically different from the original O'Neill setting, especially in the second part and yet it is now the standard setting, and a number of motifs that he developed around the low E in the first part of The Morning Dew have also found their way into the common vocabulary.  On the CD we also hear Potts play The Moving Cloud, composed by the equally creative Neillidh Boyle.  Potts twists Boyle's wild abandon into something closer to the setting currently in common use but drops hints of The Bunch of Keys and The Mason's Apron into the mix as well as his own arpeggios around the opening theme of the tune.

Potts' command of his instrument means that the playing of slow airs is wonderful, not alone for the melody and variations but the sheer beauty of the tones that he produces.  The rippling effect he puts into the end phrases of the Blackbird was first heard on the Claddagh LP but it is still a delight to hear it used again.  His setting of the Coolin is quite close to the standard setting, and this and the jig Apples in Winter show that Tommie Potts was happy to let the melodies stand on their own at times.

This is a truly fascinating collection of music and even a listener without a deep knowledge of the tunes that Potts weaves his magic around, can appreciate his "search for beauty through his art".  Greatly appreciated in his day by musicians in Clare and Dublin, Tommie Potts' music is currently championed by the likes of Martin Hayes and Ronan Browne, who once told me that he'd lost count of the number of copies of The Liffey Banks he had given away as an introduction to Irish music.

The sleeve notes in a small accompanying booklet written by Se·n Og Potts, Tommie's great nephew, help the listener to understand the player's approach to the music.  The only possible criticism is that we do not get any confirmation of the dates or sources of individual tracks.  While the sound quality is sometimes a clue to age, more details would have helped the listener to understand better the progress of Tommie's personal style.  That aside, this is a wonderful landmark release giving a glimpse over 20 years of Tommie Potts' interpretation of traditional music.

Available from the RT… website, this is another must have CD for enthusiasts keen to explore the outer limits of traditional Irish music.